Particularly impressive is the interior of the church-7 naves supported on 125 columns, 128 windows (55 stained glass), north tower and south tower, octagonal lantern at the intersection of the nave and transepts, choir, ambulatory and 11 chapels-these numbers give you an idea of how powerful this structure is. In the place where the cathedral stands today, there was a small chapel dedicated to the Blessed Virgin Mary, which in 1124 became a parish church. In the 12th century it was replaced by a larger Romanesque church. In its place, in the year 1352, the construction of the Cathedral of Our Lady began. The newly built church, which was to become the largest temple in the Netherlands, was to have two towers of equal height from the beginning. In 1521, after 170 years of construction, the church was completed. 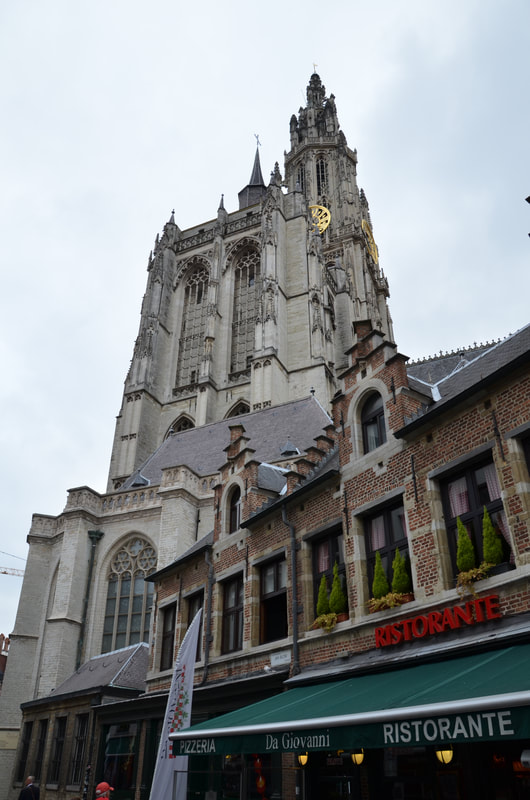 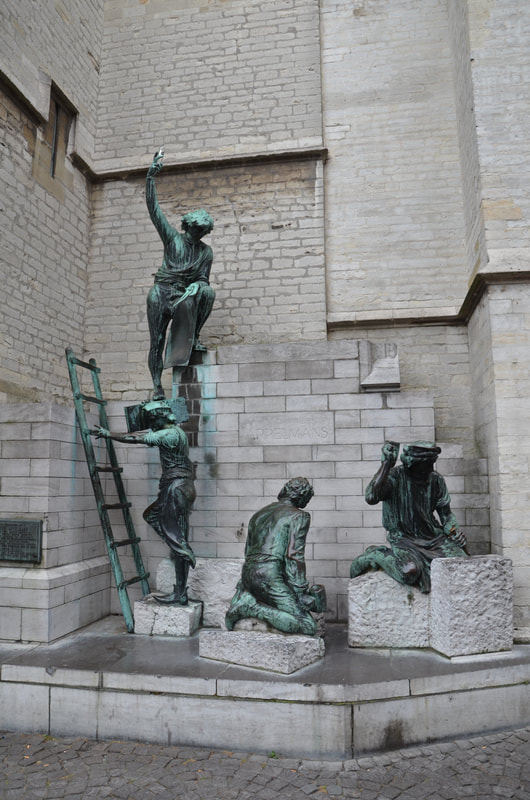 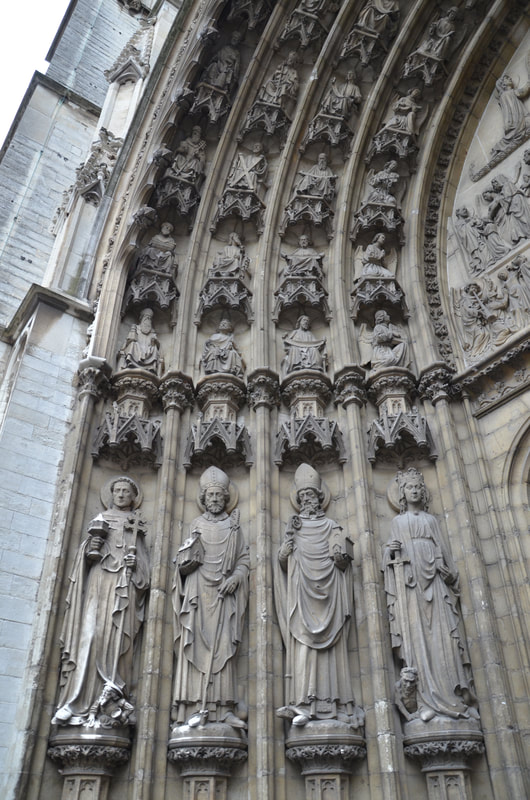 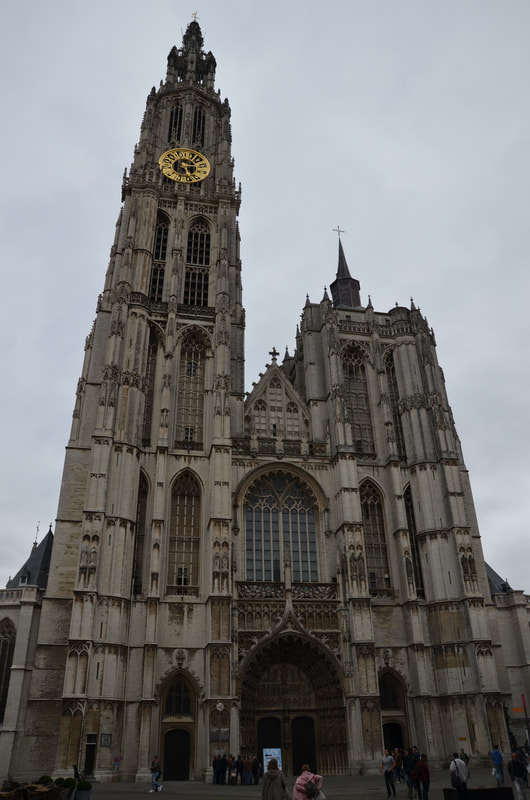 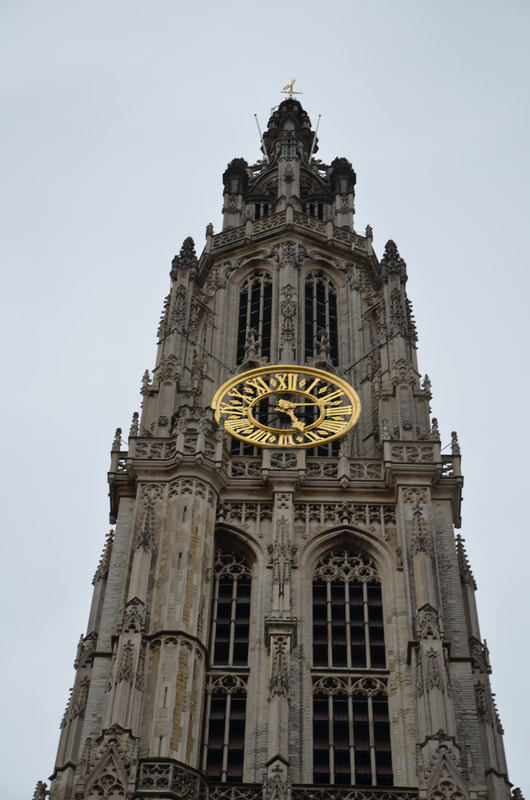 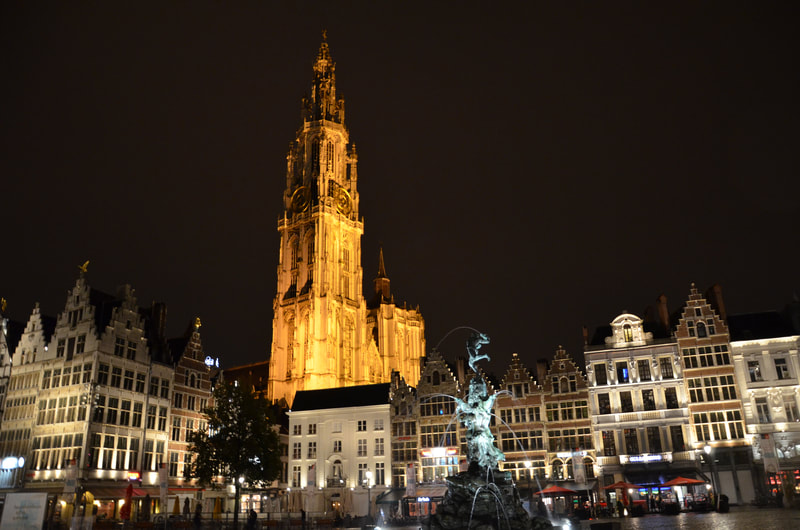 In 1533 the church was damaged by a fire. All effort went into rebuilding it, and plans to expand the second tower, which had only reached half its height, were abandoned. In 1559 the church became the main church of the bishopric of Antwerp and was awarded the title of cathedral. He lost it in years 1801-1961, when the bishopric was liquidated.
A fire in 1533, an attack by iconoclasts in 1566, and the fact that in 1581 the church came under Protestant administration, no element of the medieval interior of the temple survived.
In 1794, during the French Revolution, the church was plundered and destroyed again. The French authorities, in the year 1798, had the intention of demolishing this magnificent building. Fortunately, the occupation did not last long and in 1816 the stolen treasures began to return to the temple. The contemporary interior is baroque. There are countless wonderful sculptures and paintings in the church. All of them, however, are overshadowed by Rubens' excellent work.

The interior of the Cathedral of the Blessed Virgin Mary impresses with a multitude of sacral artworks, headed by the paintings of Peter Paul Rubens. You can also admire beautiful stained glass windows, a monumental pulpit and magnificent stalls.
Rubens Triptych Resurrection was created in the years 1611-1612. It was intended for the tomb of the artist's friend, the printer Jan Morteus. It shows a haughty, triumphant Christ, carrying a red, fluttering banner. Christ rose from a rocky grave. Such a representation of the tomb of Jesus was a novelty, because until now it was a practice in art to present the tomb of Christ as a sarcophagus. On the side panels, Rubens portrayed St. John the Baptist and St. Martyna. Saint John stands on the bank of the Jordan, the sword lying on the ground symbolizes its beheading. The saint holds a palm branch in her hand as a sign of her martyrdom. Beautiful angels are shown on the external panels. They are with their backs to double doors that appear to be open. Is this the door to eternal life? 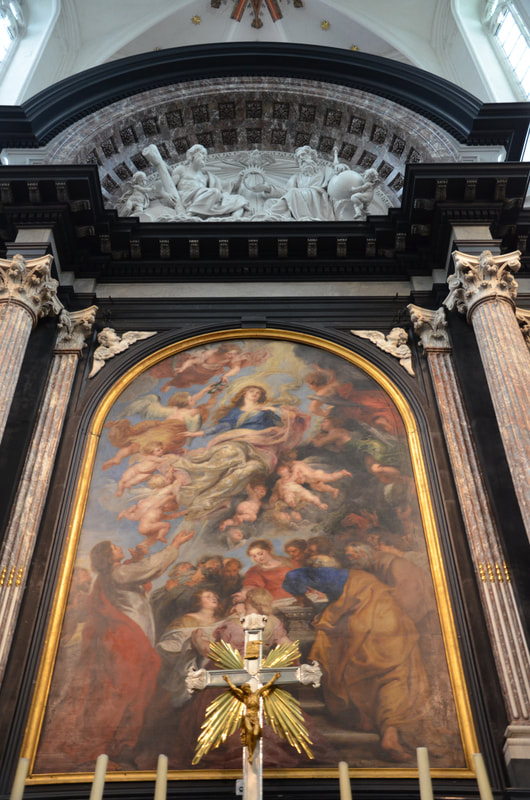 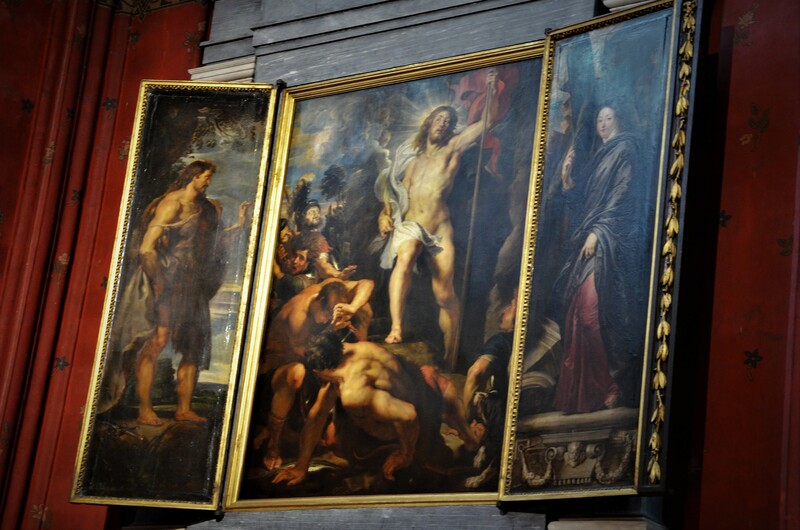 Ascension of the Blessed Virgin Mary is the fourth painting by Rubens in the Church of Our Lady in Antwerp. This is an impressive oil work (490 ×niebowstąpienie Najświętszej Marii Panny 325 cm) decorates the main altar. It is dedicated to the patron saint of the church. The painting shows Mary, being lifted by angels, whose eyes are turned expectantly towards heaven. At the top, two angels try to crown it with a crown of roses. Below, at the abandoned tomb, the figures of the twelve Apostles and three women who were present at Mary's death.  325 cm) zdobi ołtarz główny. Jest ono poświęcone patronce kościoła. Obraz przedstawia unoszoną przez aniołki Maryję, której oczy zwrócone są wyczekująco ku niebu. U góry dwa anioły próbują ukoronować ją koroną z róż. Poniżej przy porzuconym grobie postaci dwunastu Apostołów i trzech kobiet, które były obecne przy śmierci Maryi.

Interior of the Cathedral of Our Lady 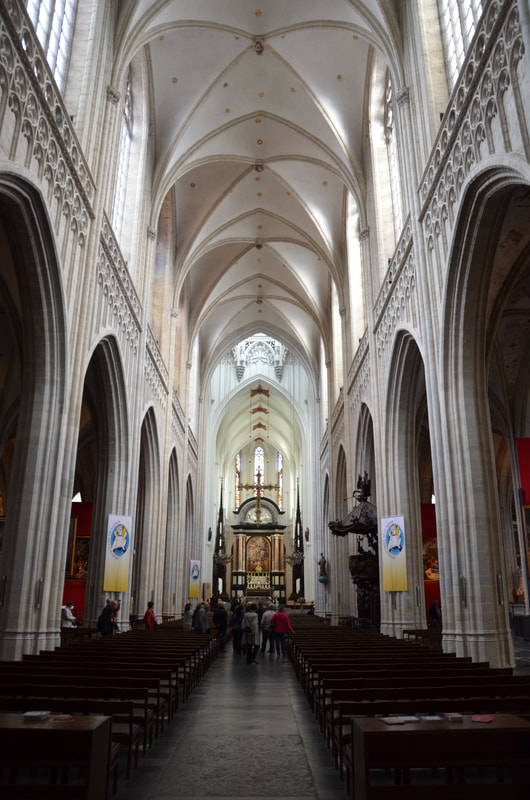 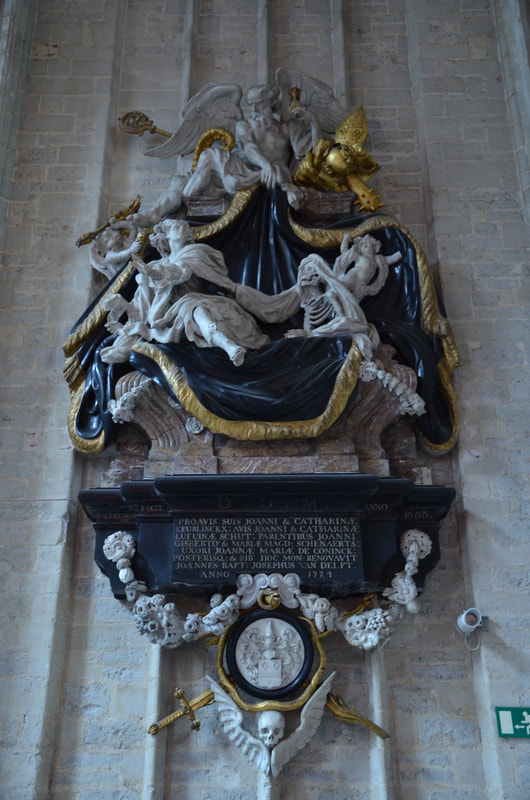 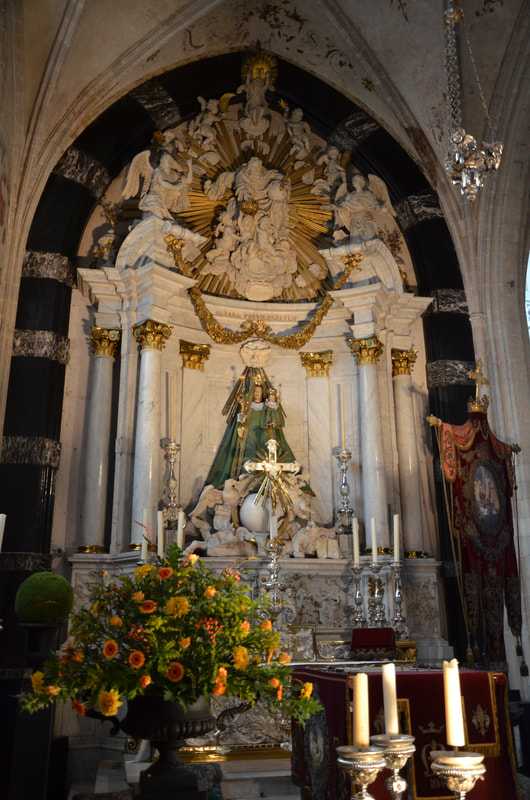 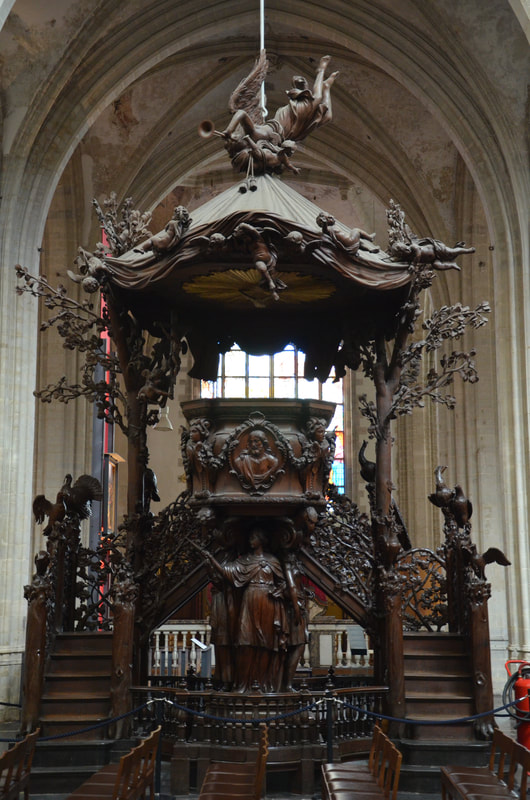 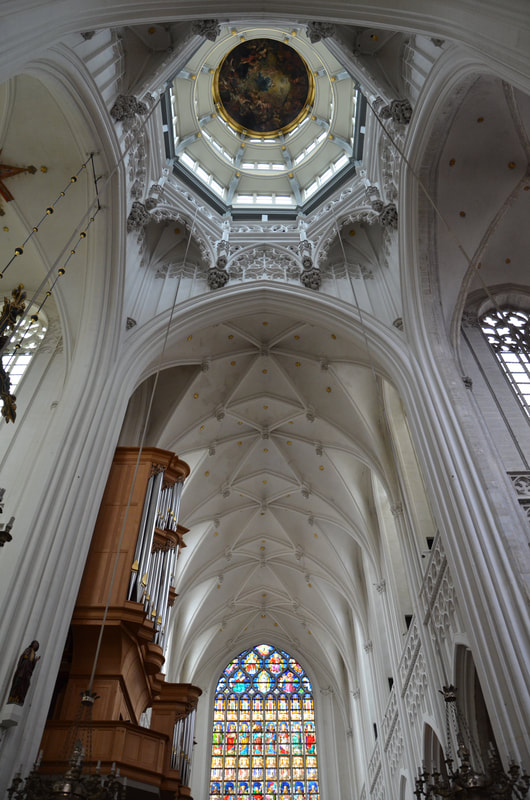 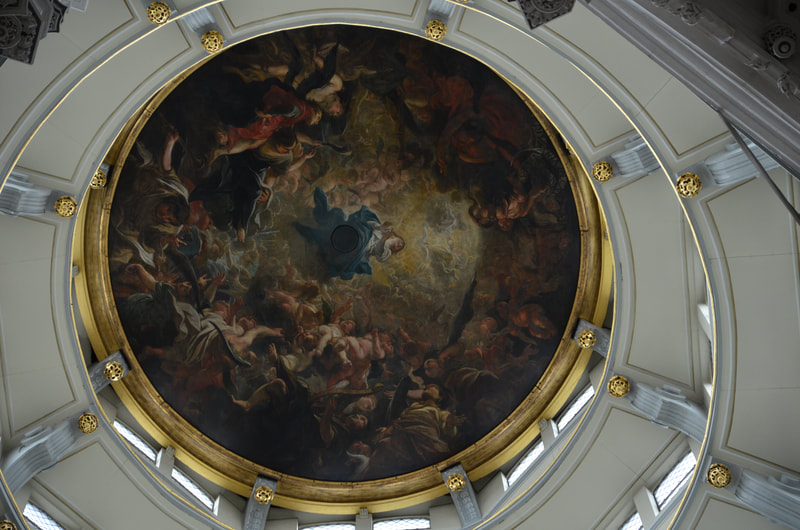 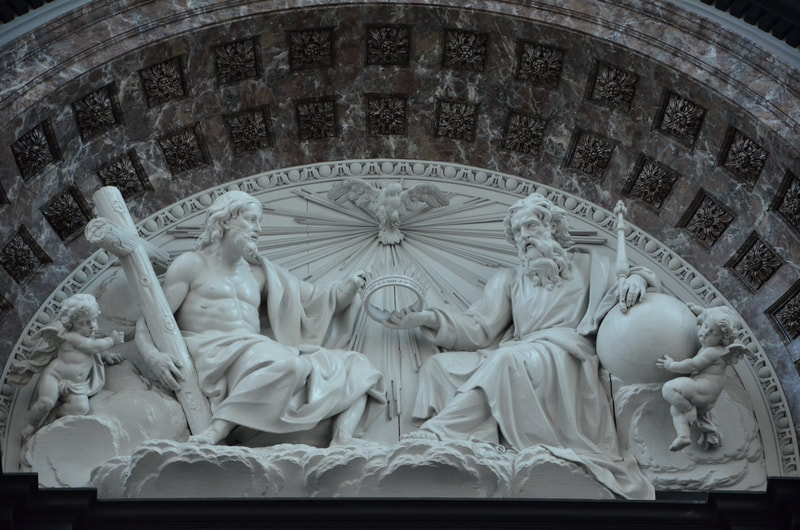 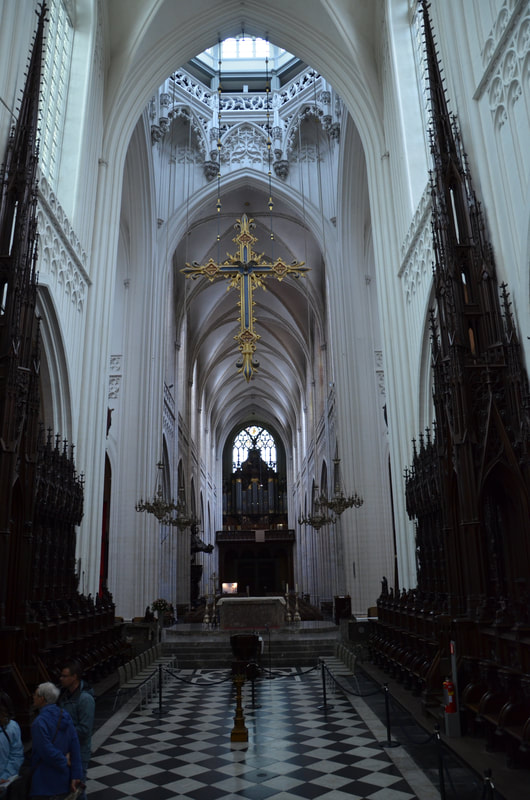 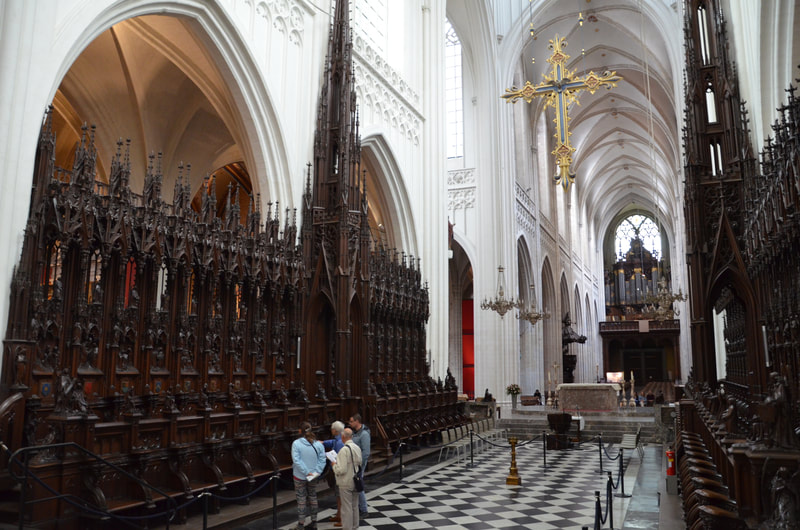 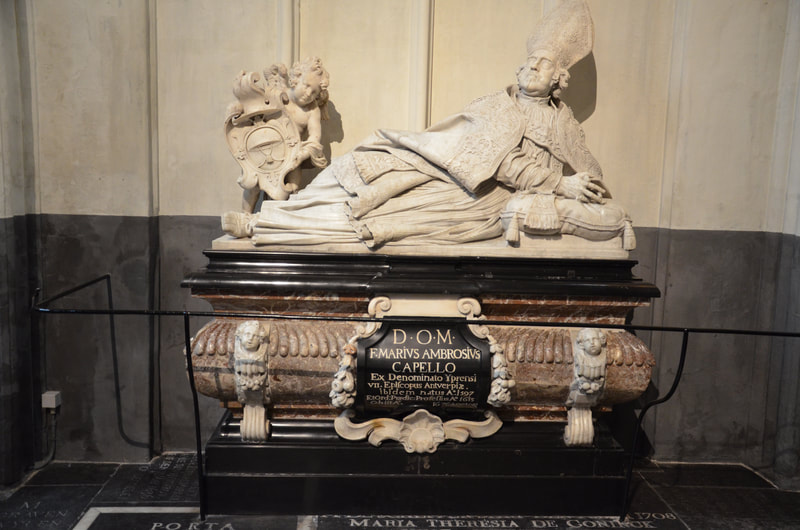 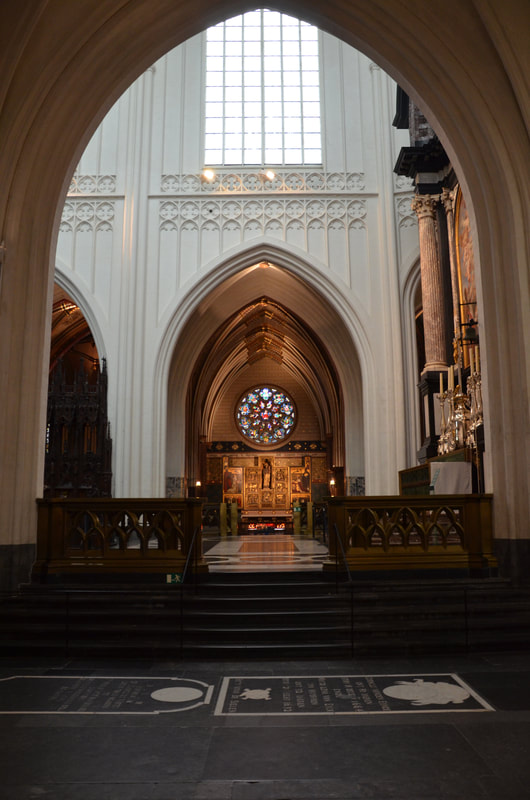 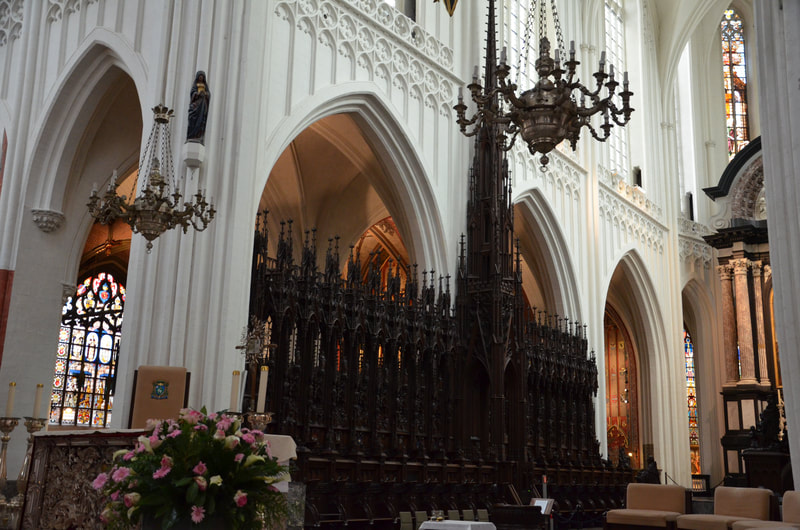 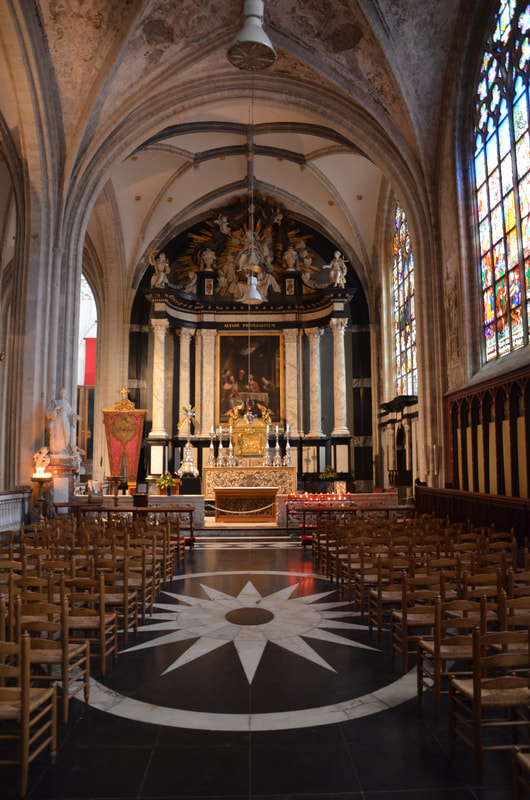 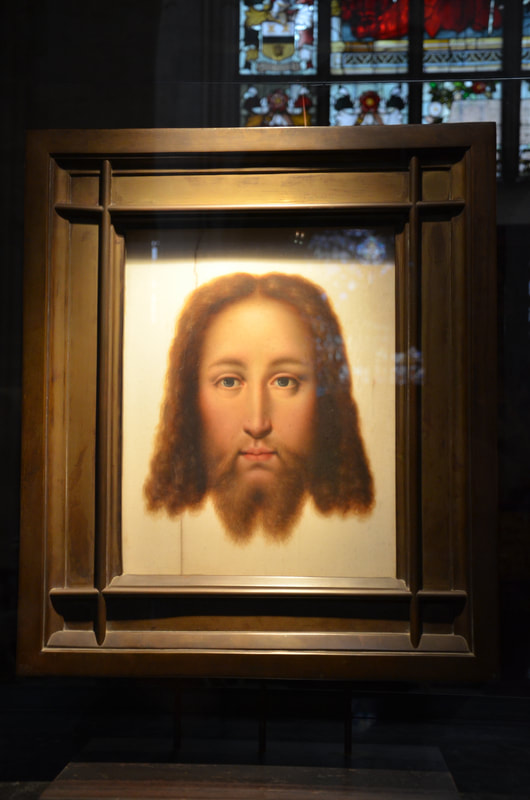 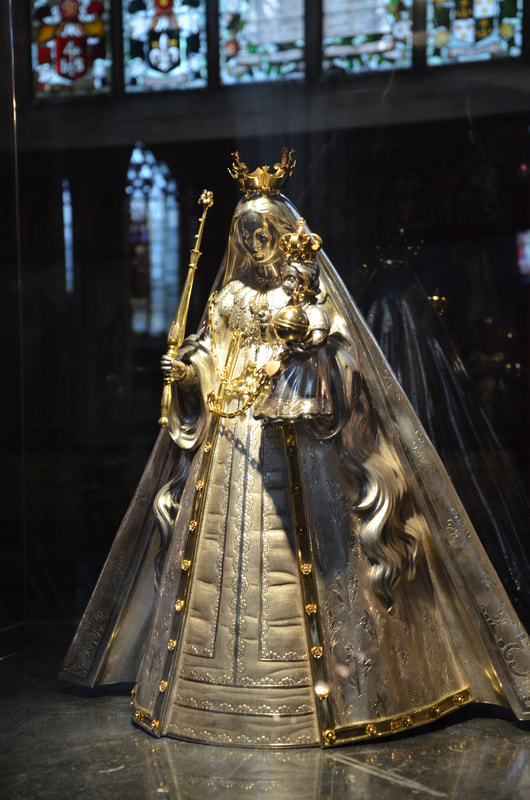 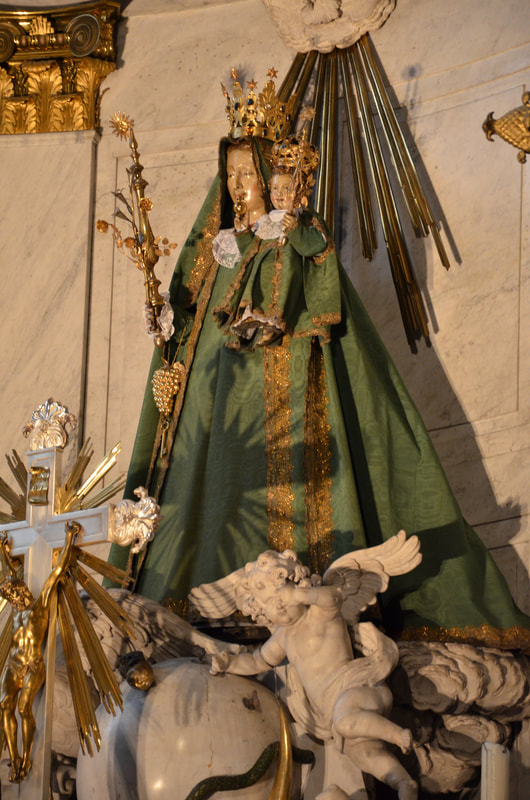 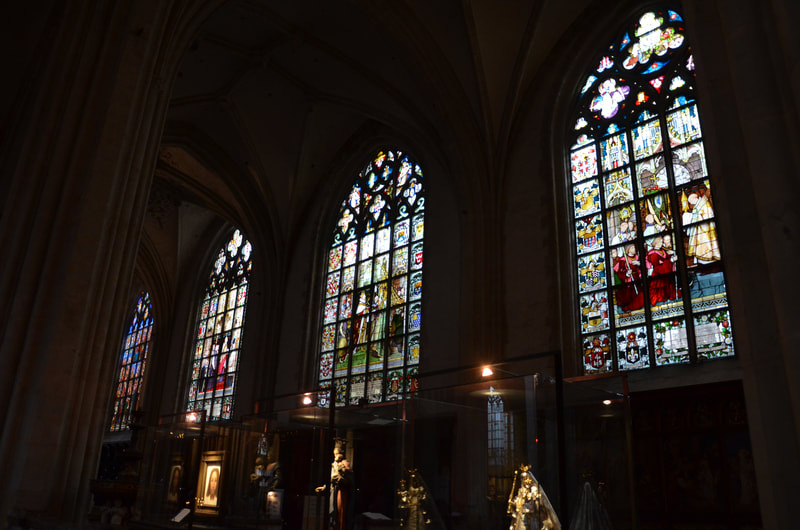 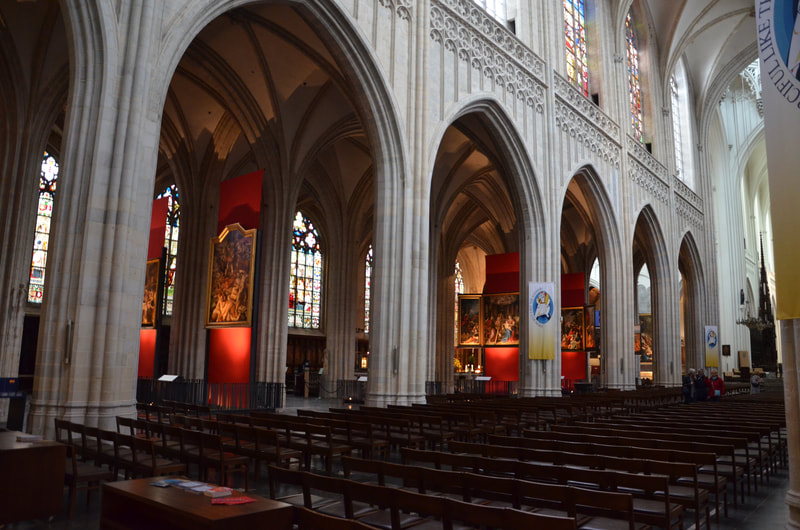 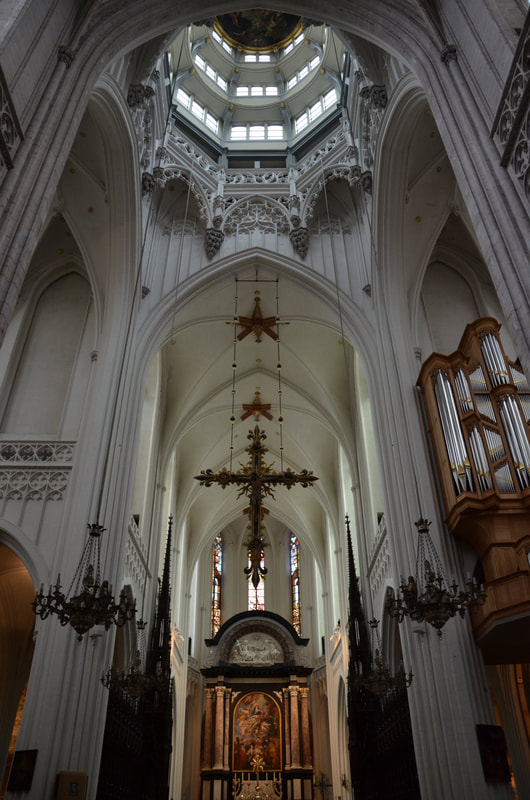 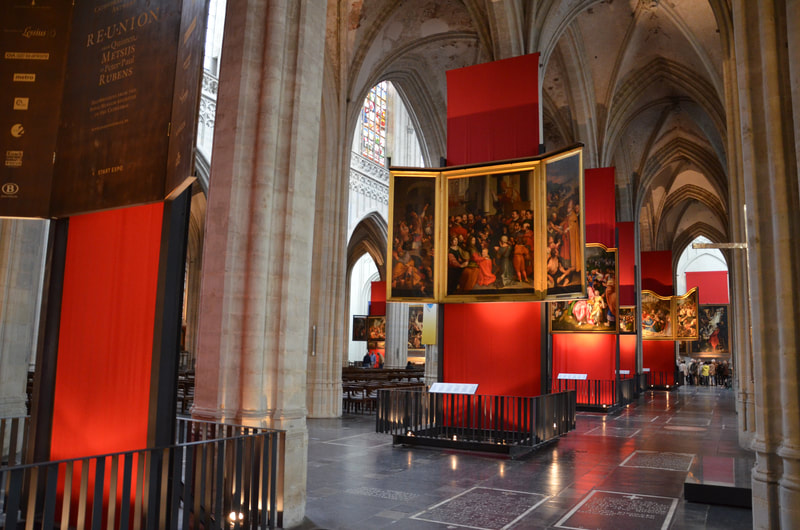