Beguinage was surrounded by a castle, city walls and the cemetery of the church of St. Martin. It is situated between the church of the Blessed Virgin Mary and the church of St. Martin. In the 1998 year, Beguinage in Kortrijk was inscribed on the UNESCO World Heritage List.
We find here 41 small baroque houses from the seventeenth century, in which livedki livedki. Each house has a fenced front garden. Three chapels, including the Gothic chapel of St. Mateusz from the 1464 year, which was rebuilt in the Baroque style in the 18th century. In the chapel there are, probably the oldest organs in the Netherlands, from the 1687 year. In the house number 41 located next to the entrance to the Beguinage, a small museum was created. In a special room you can see how the beginki's veins. In a beautiful building with an octagonal tower, made of red brick, formerly the home of the Mother Superior, there is a museum of the Beguinage, and a small guesthouse in front of it De Begijnhofkamers . The museum through multimedia techniques presents the beginek heritage over the centuries.   ﻿ 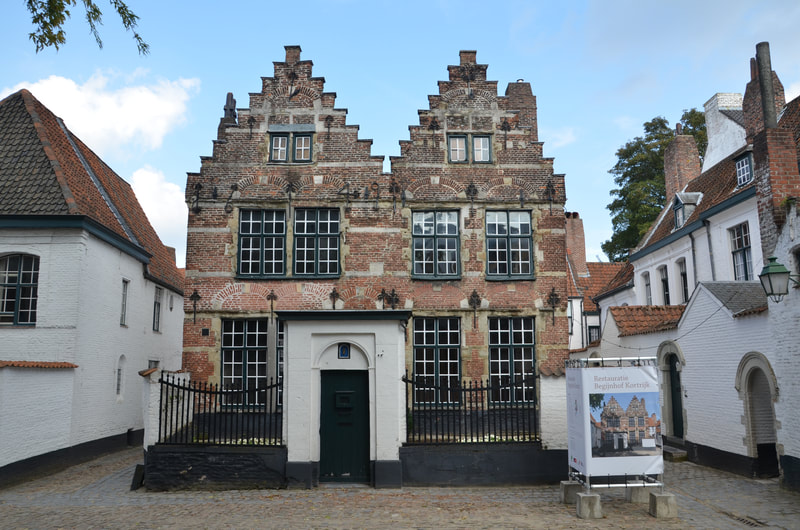 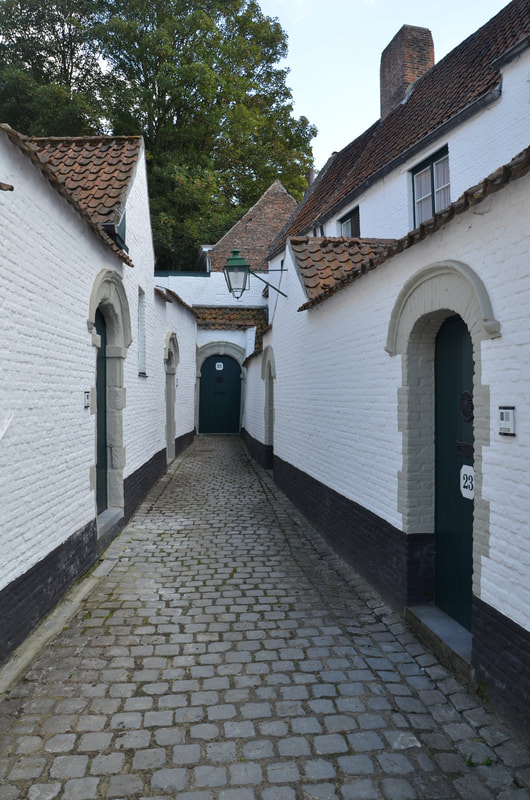 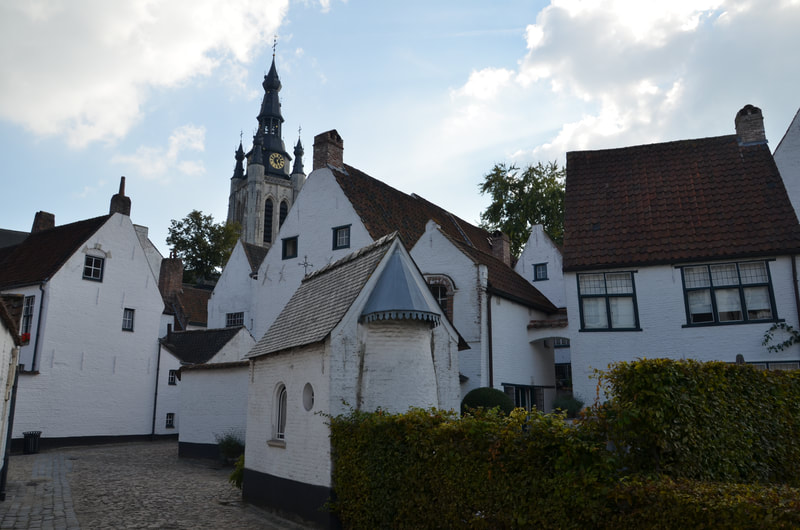 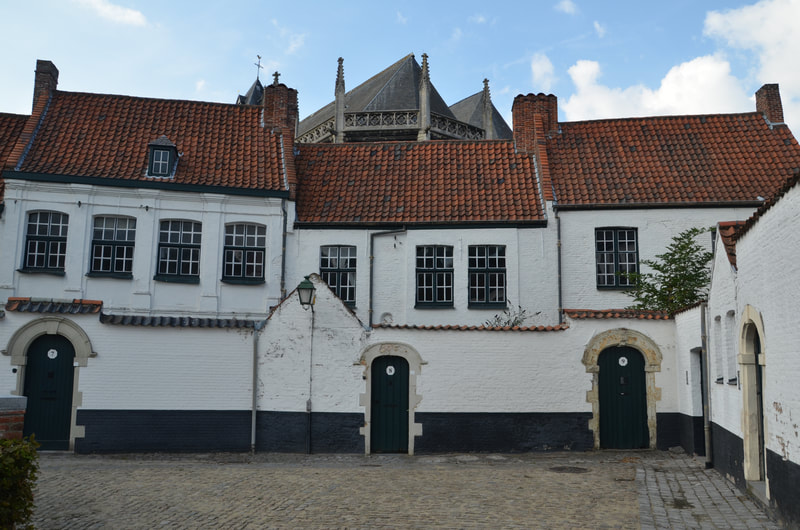 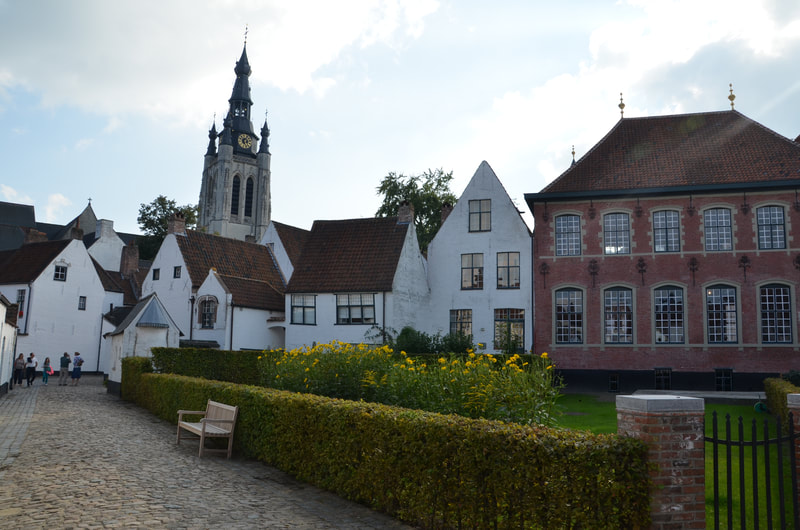 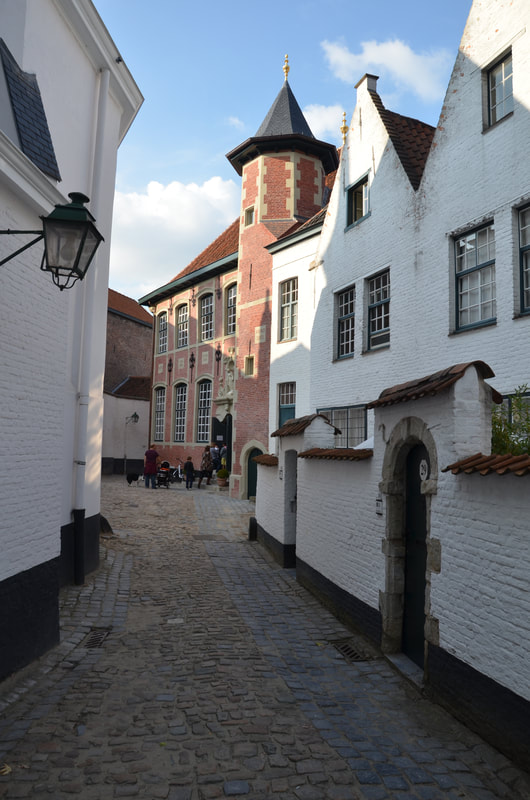 Beguinage located in the street Begijnhofstraat. In summer open from 7 to 19, and in the winter season from 7 to 18.
Chapel. Matthew open on weekdays from 13 to 17, and on Saturday and Sunday from 13 to 18. On Monday, the chapel remains closed. The museum in the former House of Mother Superior open from 13 to 18. Monday closed. 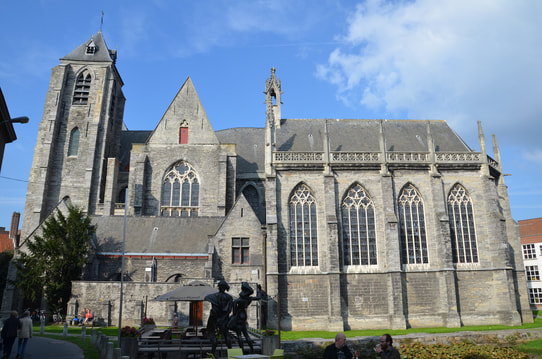 The construction of the church began in the 1199 year, at the initiative of Count Baldwin IX. Until today, only the western facade, nave and transept have preserved the Gothic character.

The towers were built at the end of the 13th century.
After the battle of Westrozebeke in 1382 the church was largely destroyed and then rebuilt.
Later, the interior was decorated in the Baroque style. Guido Gezelle, a priest and poet, was a chaplain in this church in 1872-1889.
Alabaster sculpture created by Andre Beauneveu in 1372-1373 is a masterpiece of sculpture. In the left hand of Saint. Catherine holds a symbolic circle on which her enemies tried to break it. The right hand is holding a sword, which she defeated these enemies. Under her feet you can see covering a head one of the defeated by Saint Catherine enemies. 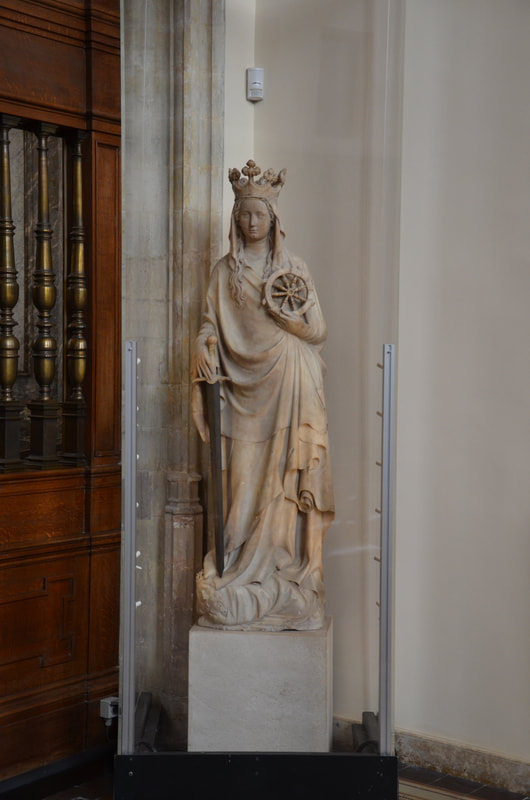 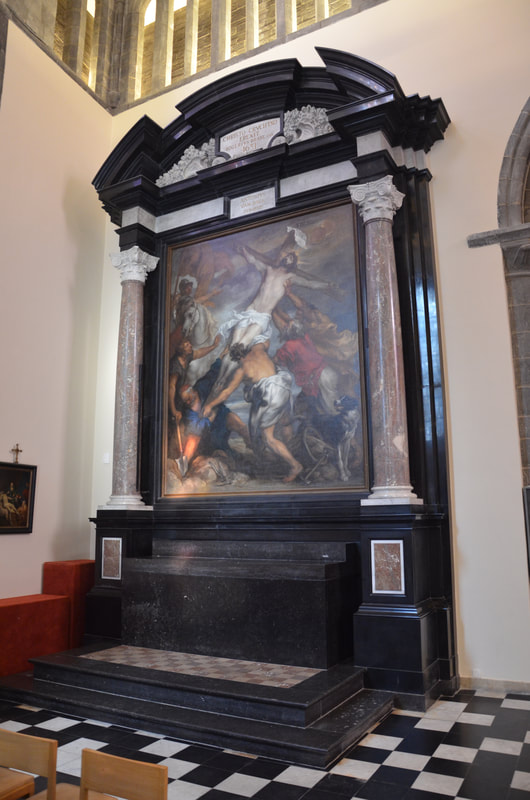 In the northern transept hangs, which is part of the altar, a delightful painting of Anton Van Dyck Raising the Cross . The theme of the crucifixion of Christ was extremely popular among medieval painters. What distinguishes this painting is not only the mastery of Anton Vanycki's brush, but also the way in which he presents the crucifixion. We are dealing here with dynamic painting, at the same time very engaging emotions. The viewer is not dealing with the figure of Christ who died on the cross, but is a witness to his crossover. Insiders of painting claim that while painting this painting, Van Dyck modeled on his master Rubens (1577-1640). Along with the alabaster sculpture of Saint. Catherine's are the two greatest treasures of the Church of the Blessed Virgin Mary.
Another interesting monument in the church of the Blessed Virgin Mary is the baptismal font. It is located in the chapel on the right side of the church entrance. This is not the original, but a copy, of the famous font found in the church in Liege.
In the church we can also find a replica of several hundred spurs caught from the legs of the fallen, in a skirmish called   the battle of golden spurs French knights.
Worth seeing is also the Dukes' Chapel built to order of Prince Lodewijk van Maele who wanted the chapel to be was a family mausoleum dedicated to Saint. Catherine. Hence, in the chapel stands a statue of Saint. Catherine, commissioned by van Maele by Andre Beauneveu.
We can also admire the figures of the Flanders counters painted on the walls. The chapel has a touch screen, through which you can learn the history of the place. 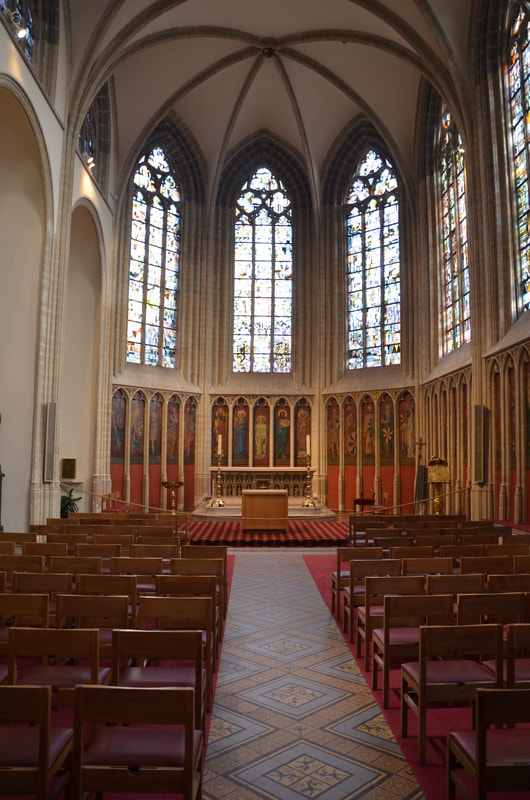 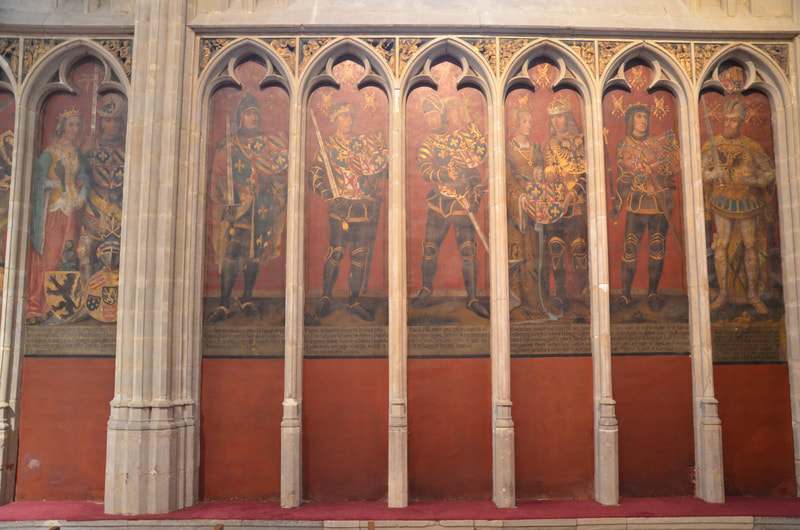 In the year 1862 completely burned her wooden section. The reconstruction took several years. It houses a magnificent carillon with 49 bells. The church consists of three aisles. Middle nave and two side aisles. To the left aisle, the Chapel of St. Anna, rebuilt in the neo-Gothic style after a fire of 1862 year. 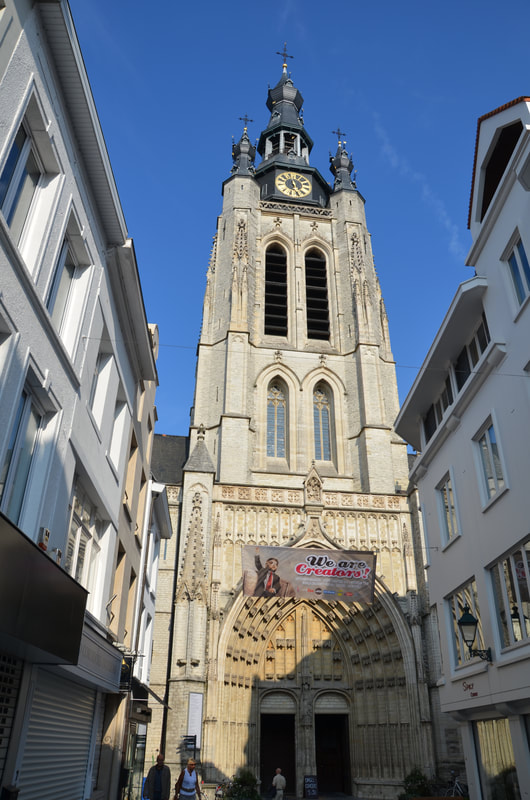 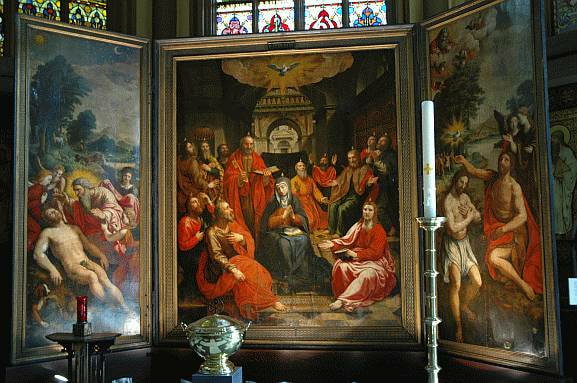 In the church you can admire many unique works of art. The pearl of this wonderful collection is: painted in 1587 a year, by Bernard Rijckere,   Triptych of the Holy Spirit   and a unique, 6 -metre high   Tower of the Sacraments,   from 1585 year. We will also find sixteenth-century chasubles and antependia (richly decorated covering the mensa of the Christian altar), which are considered to be Flemish masterpieces.

Broel towers (Broeltorens)   it's two towers on the Lea River. Although they look identical, they were not built at the same time. They were also intended for various purposes. The south tower, called Speyetoren, was built in 1385 a year to control shipping on the Leie River. It was also part of the fortified wall defending the first medieval castle in Kortrijk.
The northern tower, called Inghelburghtorre, it was built in 1415 year and served as a weapon warehouse. Sandstone and limestone were used to build both towers.
The bridge on the river, connecting the two towers, was built in 1385 year. It was destroyed and rebuilt many times over the centuries. 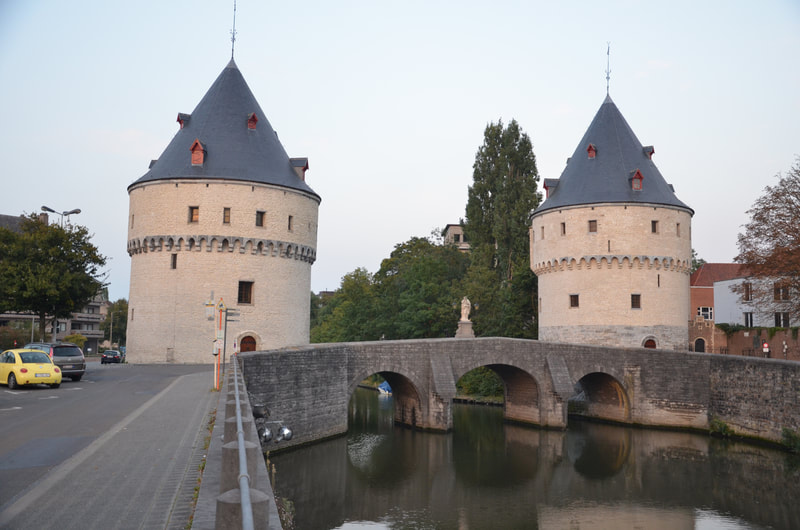 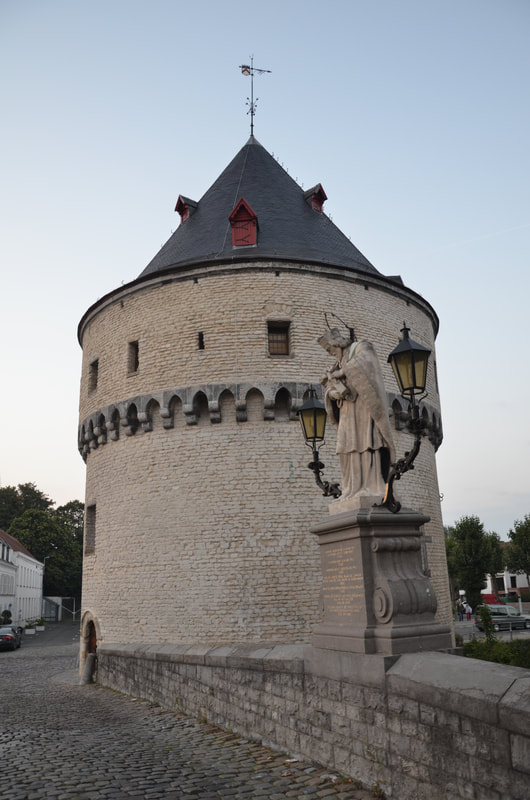 In the center of the bridge there is a statue of Johannes Nepomucemus (1345-1393), a saint from Bohemia, who was sunk in the Vitava River by the King of Czech Wenceslaus, for refusing to reveal the secrets of confession to the Queen of Bohemia (Zofia Bawarska). Johannes Nepomucemus is a patron against the calumnies and because of his martyr's death he is also a patron against floods and drowning.

Currently, both towers are one of the most recognizable attractions in Kortrijk. Along with the artillery tower are the last existing parts of the city walls around the city.
Artillery Tower   this   The 14th-century tower, which is next to it Broel Towers, is the last existing part of the medieval city fortifications. It was built along with the castle, in the years 1301-1302, at the behest of the French King Philip the Beautiful, at that time waging a war against the Count of Flanders, who was his Vassal.
The tower was located in a strategic place, between the city moat and the moat of the castle. Originally the tower was intended as a storage of drinking water. It was later transformed into a cannon magazine, and later it was used as a place where powder and ammunition were created and stored. This tower was also part of the fortifications surrounding the church of the Blessed Virgin Mary.
In 1990 archaeologists discovered that the Artillery Tower stands on the remains of an even older tower. Many well-preserved weapons and ammunition were discovered during excavations.
The Artillery Tower can only be visited with a guide. It is located at Deken Zegerplein, next to the Church of the Blessed Virgin Mary. 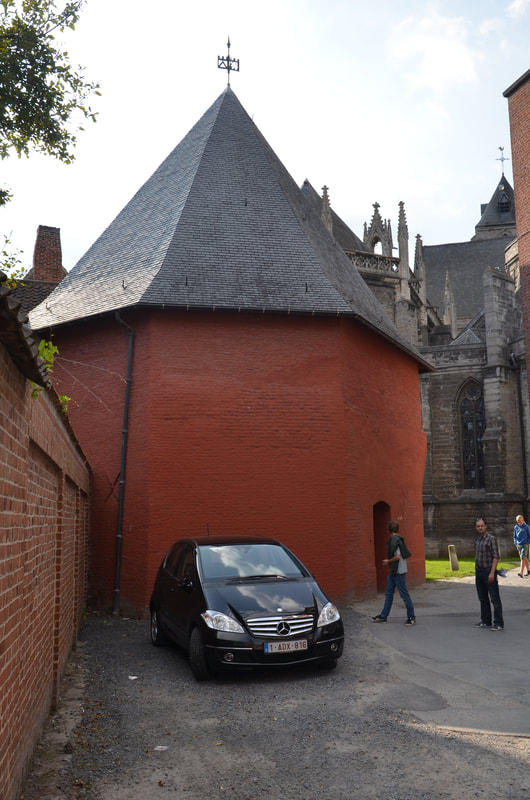 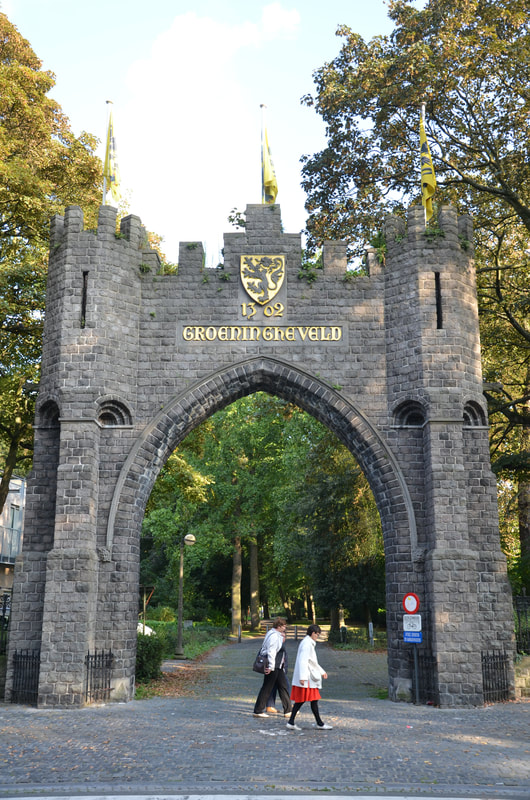 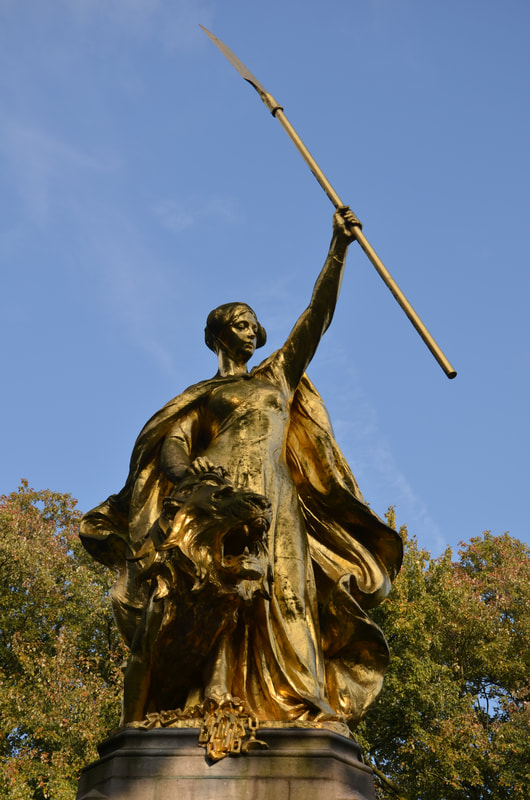 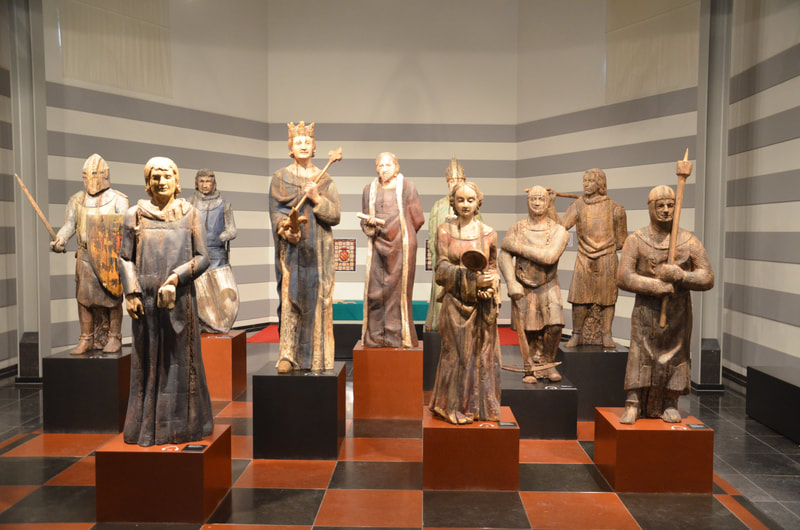 Battle of Golden Spurs 1302 it is the greatest victory in the history of Kortrijk and the reason for the pride of its inhabitants. The date of the victory over the French army is today considered a national holiday in the Flemish part of Belgium. In Kortrijk we find many references to this battle.
Gate and Groeninge Monument were made on the occasion of 600 years Battles of the Golden Spurs. They are in the place where the battle took place. The Arc de Triomphe was made of stone and bears the inscription 1302 Groeningheveld. A little further, in the park there is a gilded monument of the Virgin of Flanders, the work of the sculptor Godfried Devreese. He holds a spear in one hand, pointing to the defeated French knights, and the other to the proud Flemish lion, who freed himself from French captivity.
Kortrijk 1302 is a museum about the battle of 11 July 1302 year. You can learn about the history of this battle, its heroes, as well as its causes and effects.

belfry is one of the few historic buildings that are on the main square in Kortrijk. This is the result of air raids by the Allies during the Second World War, especially that of 21 July 1944 year, when the Allies dropped 5000 bombs into the city center. The belfry stands in the central part of the market. It was part of the former cloth hall. The oldest mention of the cloth hall comes from 1248 year. The belfry was inscribed on the UNESCO World Heritage List. From the 1712 year on its top there is a gilt statue of Mercury (God of commerce). The front of the tower is decorated with two figures Manten and Kalle striking the hour.
On the south-east side of the tower there is a monument commemorating the First World War, unveiled on 15 July 1923 year. The original hammer clock (Manten) was kidnapped as a spoil by Filip Śmiały in the year 1382 and donated to the city of Dijon, where he decorated the tower of the Church of the Blessed Virgin Mary.
Town hall- Kortrijk had a town hall already in the fourteenth century. However, it was completely destroyed by the French after the victorious battle of Westrozebeke in 1382 year. The current town hall was built around 1520 a year in the Gothic-Renaissance transitional style. On the exterior facade, you can admire the statues of the major counties of Flanders. Inside the town hall, pay attention to   Rajc Room and Council room beautiful, pride of the town hall, late-Gothic, carved fireplaces from 1527 year, stained glass windows, wall paintings, and noteworthy topographic maps. In the gothic room, on the first floor, you can see a modern painting depicting the battle   Golden Spurs, painted by Jan van Imshoot.
Opening hours: in July and August on Tuesdays, Thursdays, Saturdays and Sundays. 15-17. On the other days, the town hall can only be visited with a guide.
src = "/ files / theme / custom.js">
EnglishFrançaisNederlandsDeutschEspañoljęzyk polski