One of the most important places in the High Ardennes. Surrounded by beautiful forests, which are a refuge for birds and wild animals. Popular among hunters and fans of hiking along forest paths. The city is named after its patron. According to the legend, Count Hubert saw a deer with a crucifix in its antlers while hunting in the nearby forests. This prompted him to convert to Christianity, to become a bishop and then a saint. Every year on December 3, on the anniversary of conversion of St. Hubert, a mass is celebrated in the basilica with the participation of pilgrims and hunters. 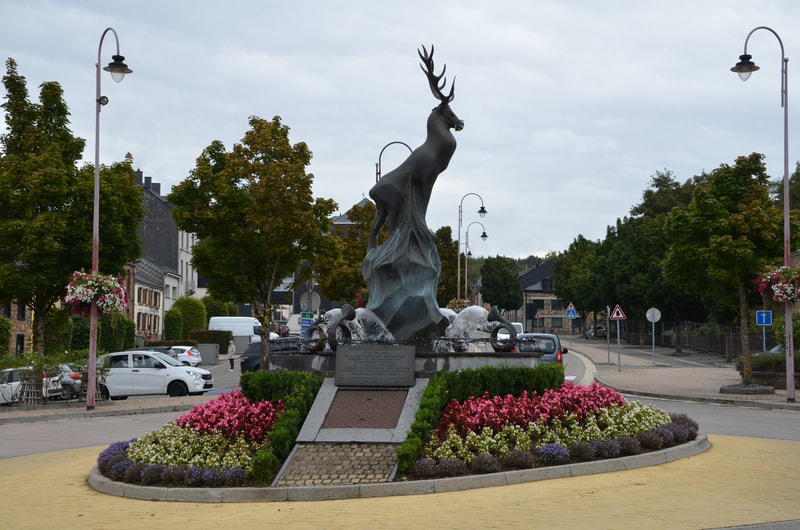 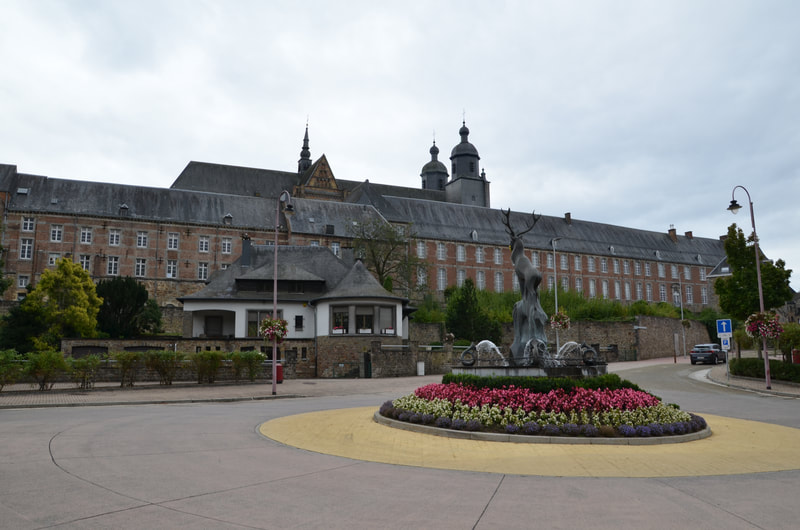 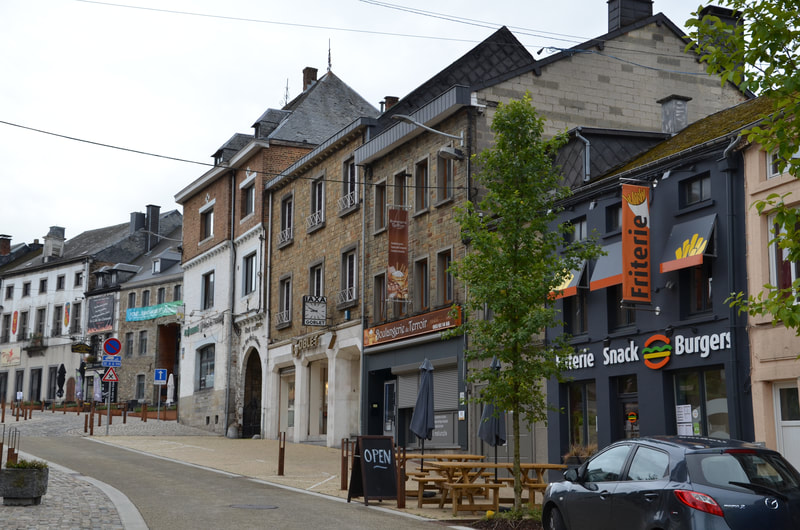 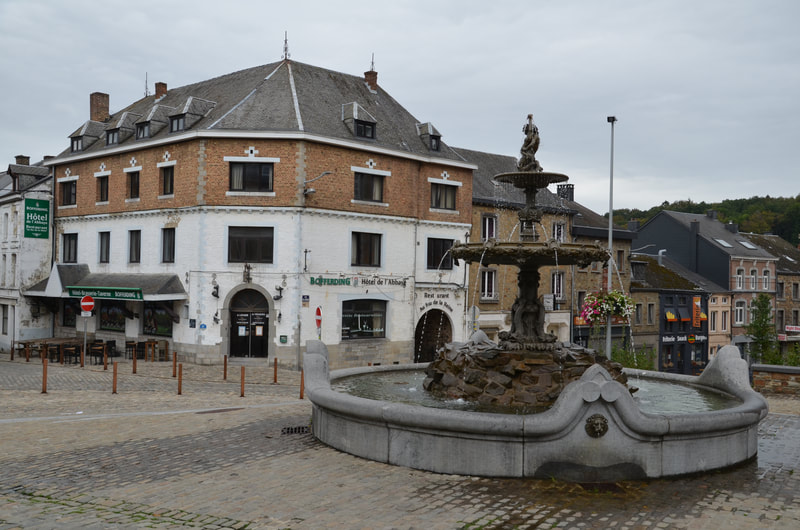 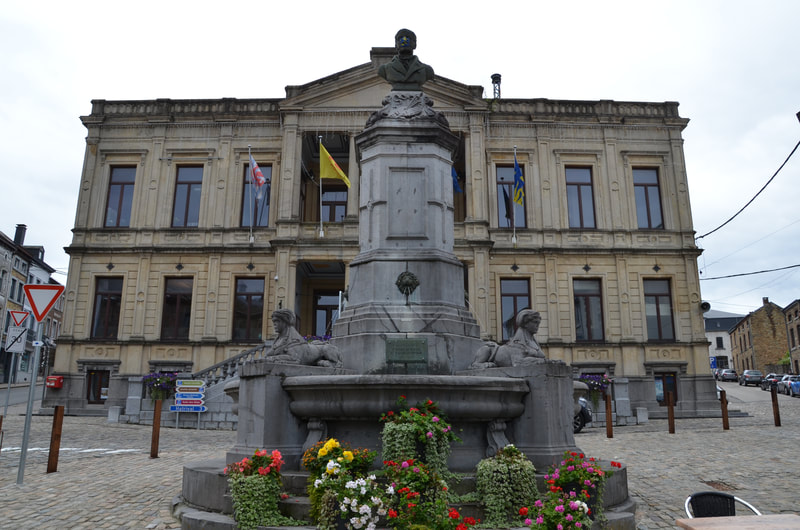 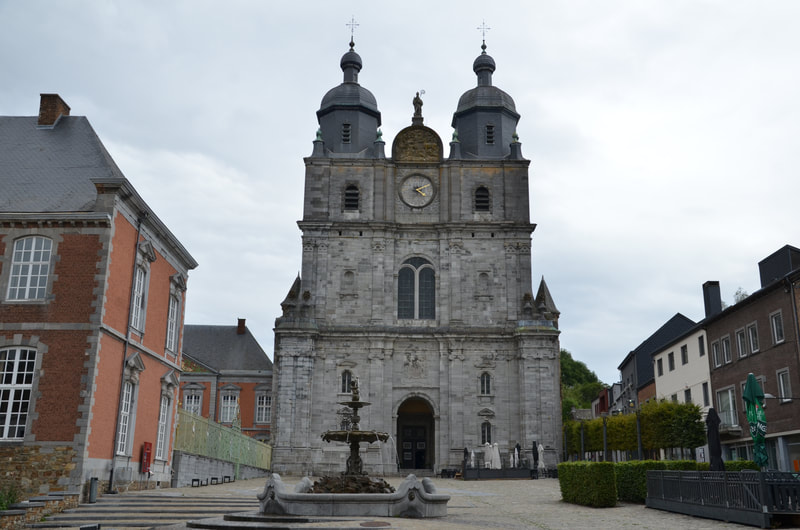 St. Hubert's Abbey, belonging to the Benedictine Order, was founded in 687 on the initiative of Pepin II and his wife Pelektrude. It gained fame when the Bishop of Liege brought here the relics of Saint Hubert, the patron saint of the Ardennes and hunters. Over the centuries, it was destroyed and rebuilt several times. The buildings that can be visited today have been reconstructed in their original place. The abbot's palace next to the basilica, built of brick and limestone, was built in the 18th century. Today, the abbey buildings are occupied by the cultural office and hide an important part of the national archives. They cannot be visited.

The abbey church has a long rectangular nave with dimensions 81,50 mx 30,50 m, ended with a polygonal apse. The building as a whole has a clear orientation. The choir faces east, while to the west there are two towers with a porch. The temple has five naves consisting of five spans 7 meters each, an invisible transept, and a deep choir with an ambulatory for five chapels. A crypt was built under the choir.

The facade of the church is a large limestone structure supported on a high pedestal, masking the old towers, it is more classicist in style, although the octagonal towers are inspired by the Baroque. Above the entrance to the porch there is the coat of arms of Clement Lefevre, which contains a cross, myrrh and a sword, symbols of his power and authority as the abbot and lord of the city of Saint-Hubert. At the top, between the two towers, there is a bas-relief reminiscent of Hubert's conversion during the hunt. Saint Hubert is depicted here in the vestments of the Bishop of Liege. The original statue, badly damaged in 1986, was replaced with a sculpture by the contemporary artist Jan Willame.
​​ 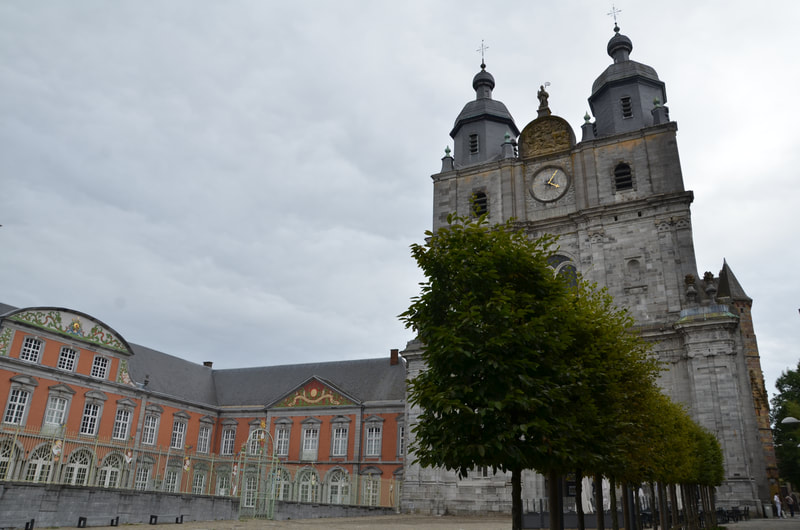 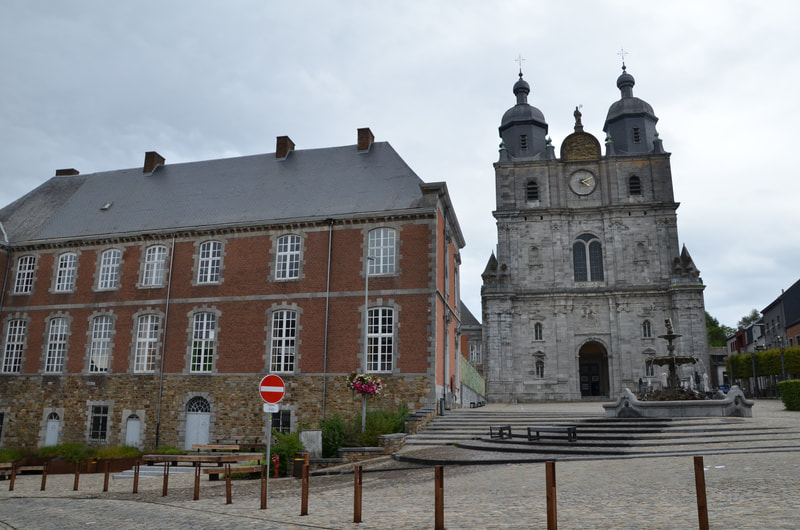 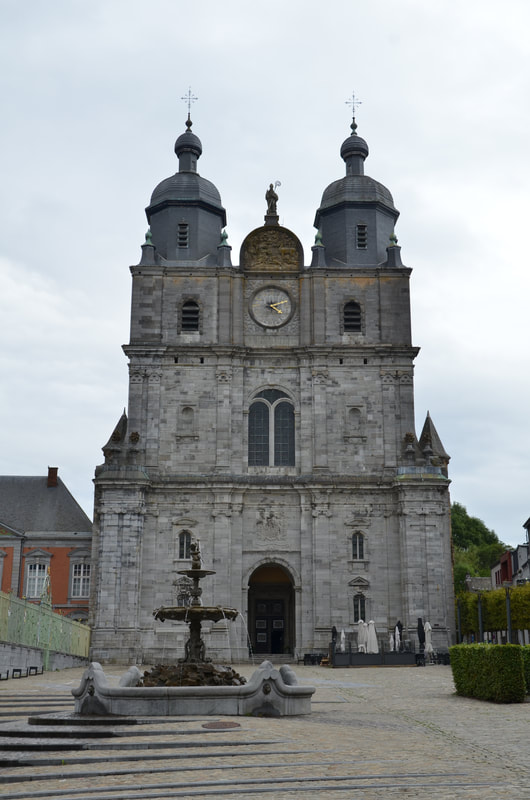 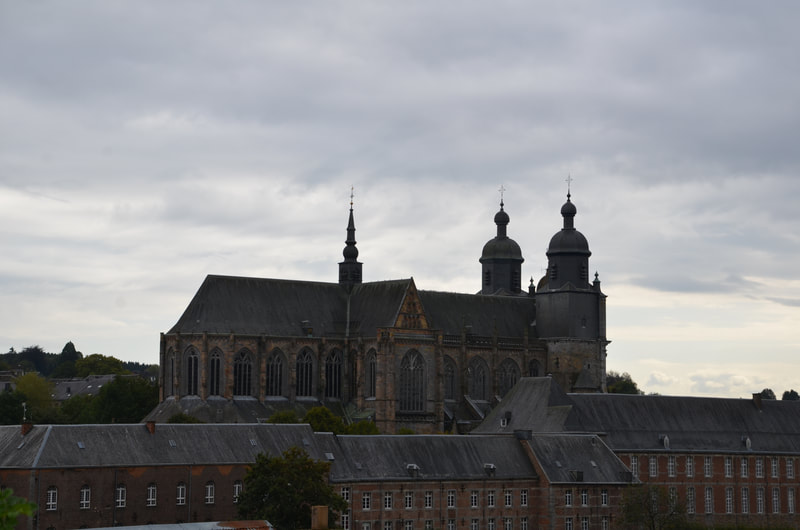 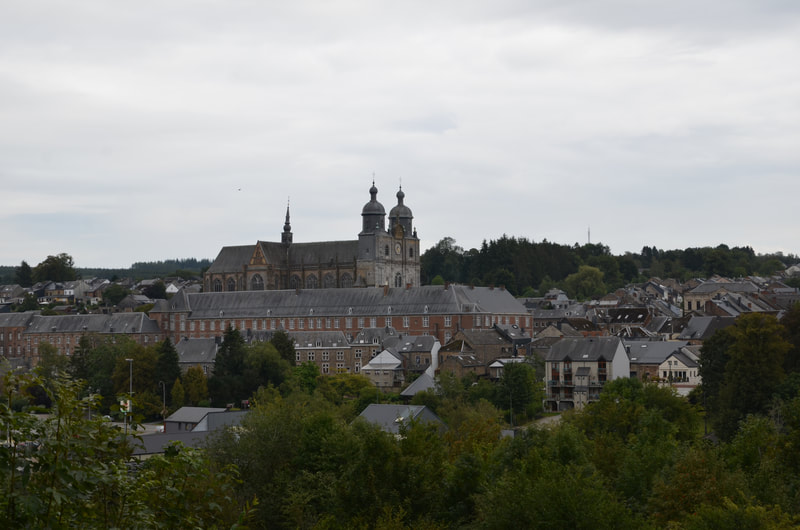 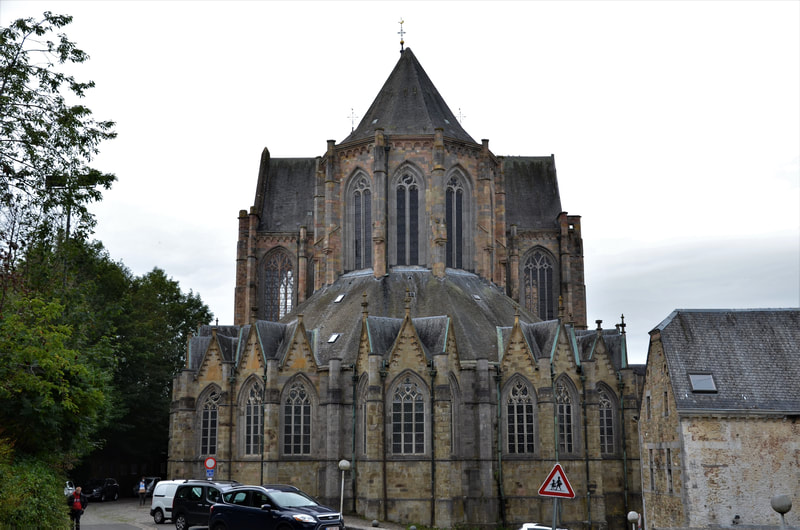 The interior of the church of St. Hubert

The entire chancel was rebuilt in the Baroque style at the beginning of the 18th century. In the year 1721 the main altar was built. All the sculptures placed in it, except for the Virgin Mary, were created by C. Van der Vecke. At the entrance to the choir, there are two small altars, whose simplified structure refers to the main altar. On the north side there is an altar with a statue of the Virgin Mary with a rosary, on the south side there is an altar with sculptures of St. Benedict, St. Dominic, and St. Agatha. These altars were consecrated in 1741. The great organ is believed to be made by Antoine Le Picard.

The altar in the aisle was dedicated to the patron of the cathedral. The sculpture depicte St. Hubert as a bishop, with a deer at his feet. The relics of the Saint disappeared irretrievably during the iconoclast attack in 1568. In later years, in order to obtain funds for the reconstruction of the temple, the reliquary, in which were kept the remains of St. Hubert, was sold. From 17 September 1848, in the northern part of the transept, there is an empty tomb of St. Hubert. Its creator is Guillaume Geefs, court sculptor of King Leopold I. The sculpture shows the Saint in the bishop's robes.

The large arcades, triforiums and tall windows are made in the Brabant Gothic style, while the blind arches on the outside are an example of the Gothic style from Liege. The crypt is the oldest part of the church. It was consecrated in 1560, but part of the walls of the crypt consecrated in 1081 have been preserved to this day. Originally, the remains of St. Hubert were kept here. 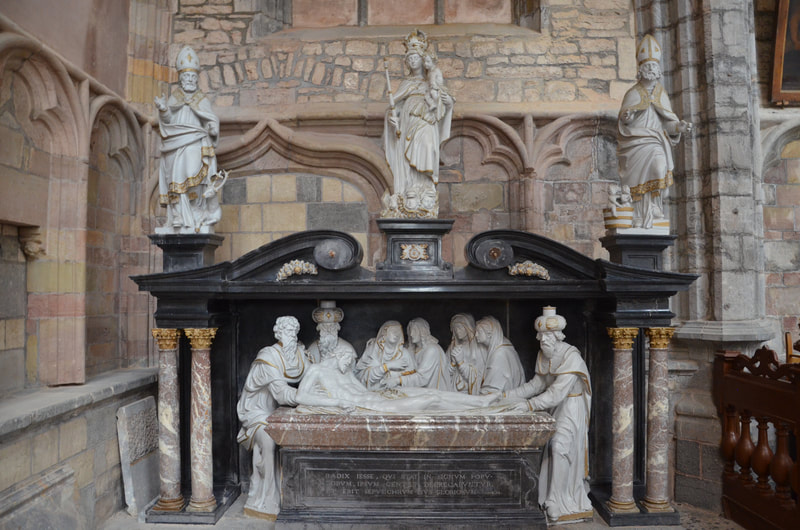 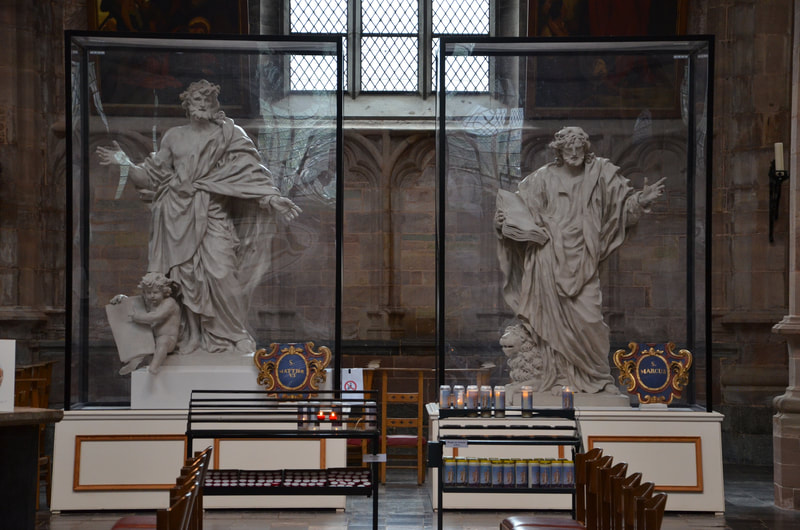 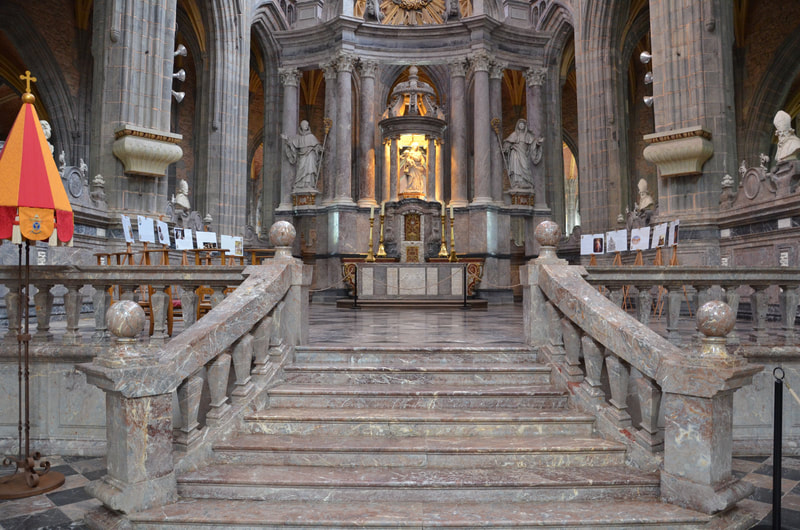 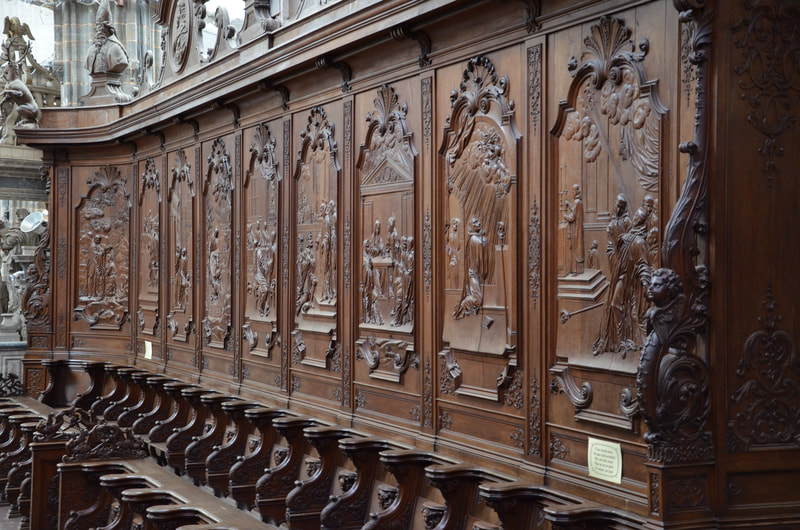 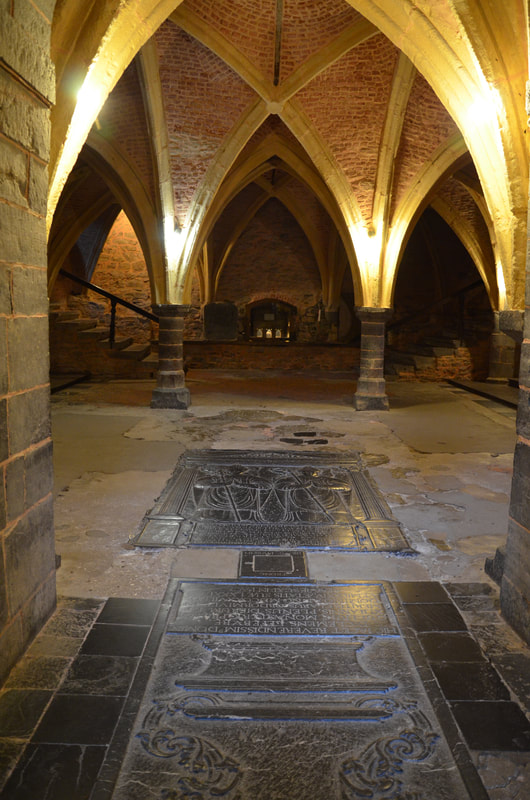 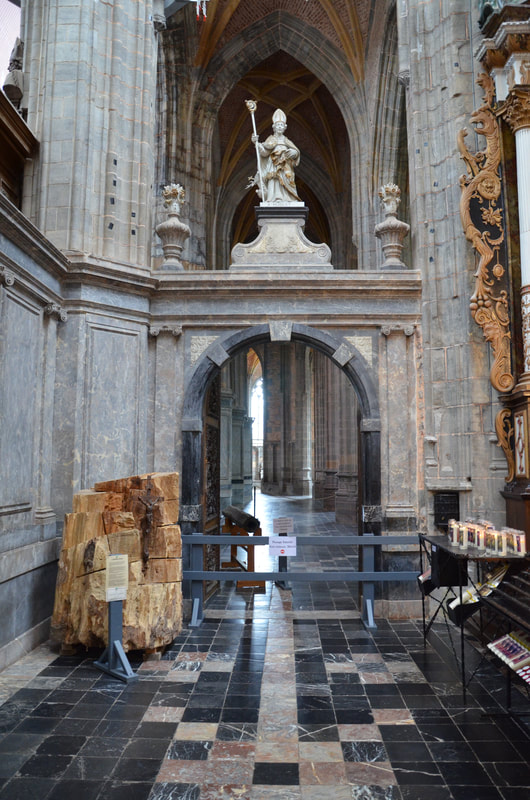 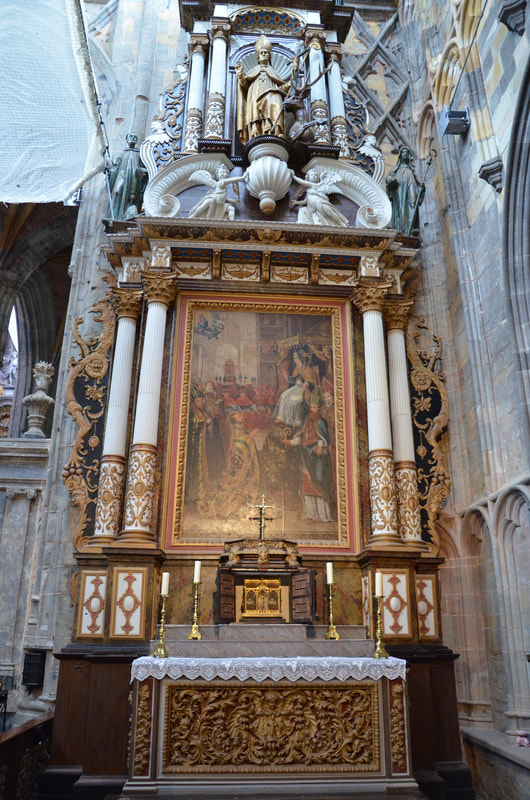 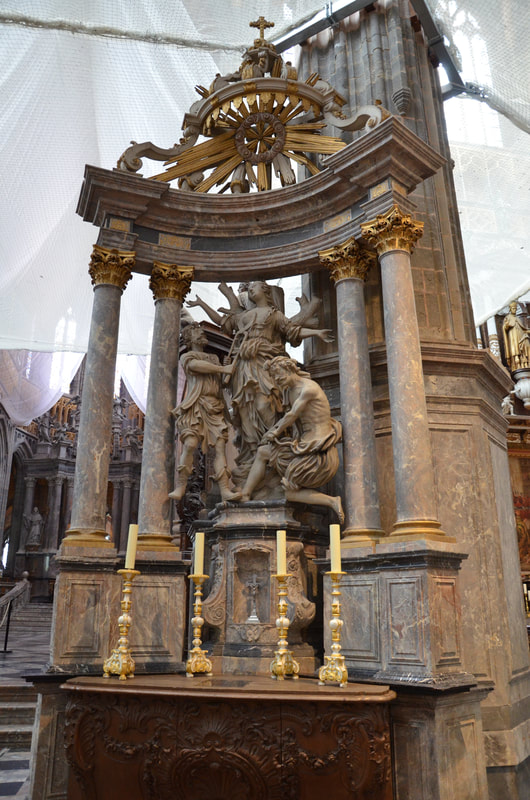 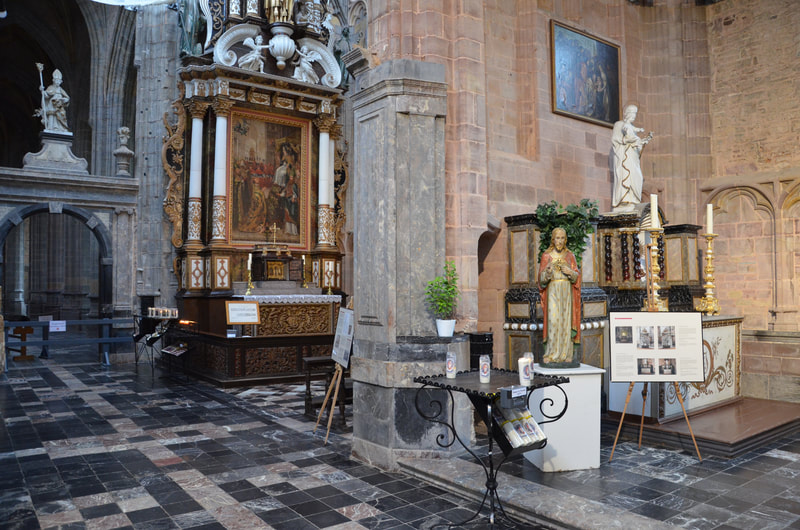 ​The most famous inhabitant of Saint-Hubert was Pierre-Joseph Redouté, known as Raphael of flowers. This wonderful rose painter was born in 1759. The city museum cultivating the memory of this artist was established in front of the house, where he lived, which was destroyed during the Second World War.

The town also has the Church of St. Gilles built in the Romanesque style in 1084, then rebuilt many times. Whereas, near Saint-Hubert, in beautiful forest surroundings, there is a monastery dedicated to Our Lady of Hurtebise.

Hiking fans will surely appreciate the La Boulaie du Rouge Poncé nature reserve, and the Fourneau Saint-Michel open air museum, built on 40 hectares, like wildlife park the Parc a Gibier, will be of particular interest to children. There is a castle in the nearby village of Mirwart. 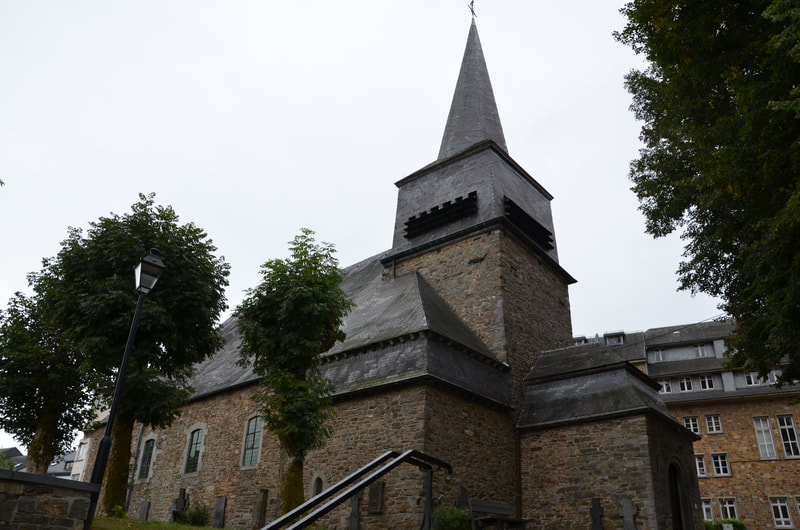 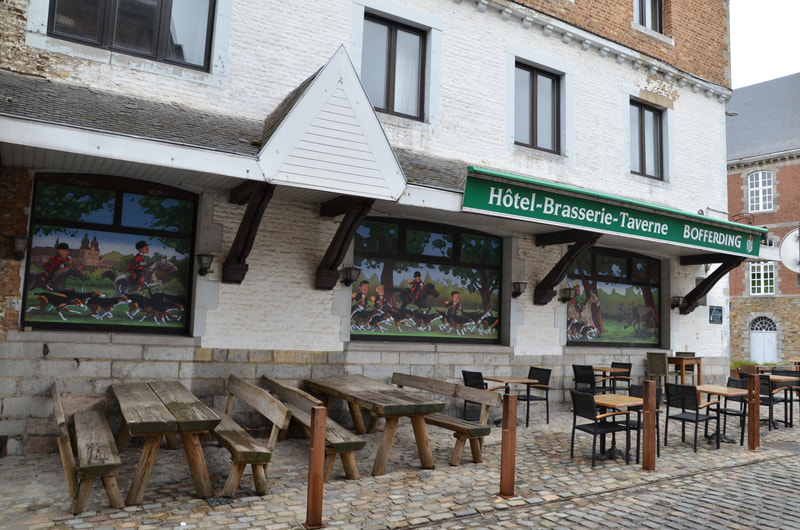 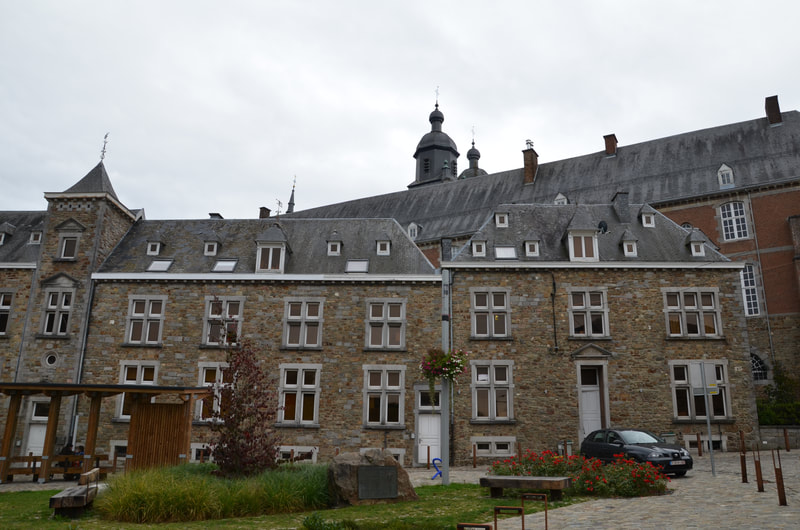 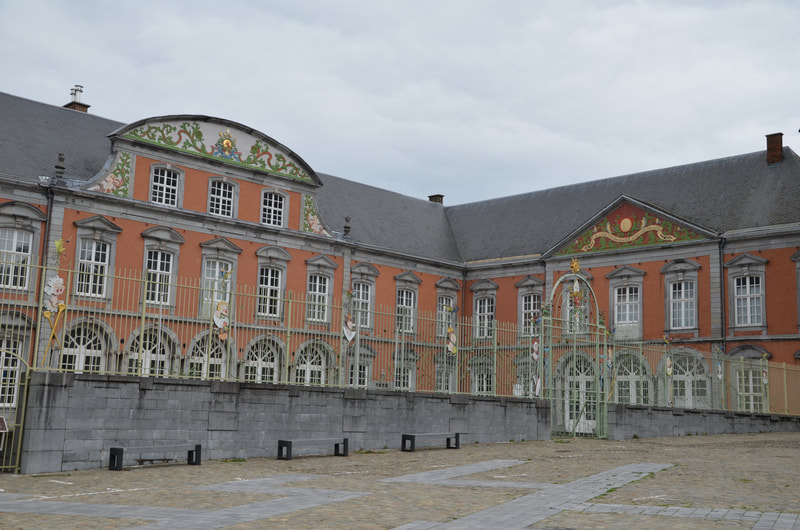 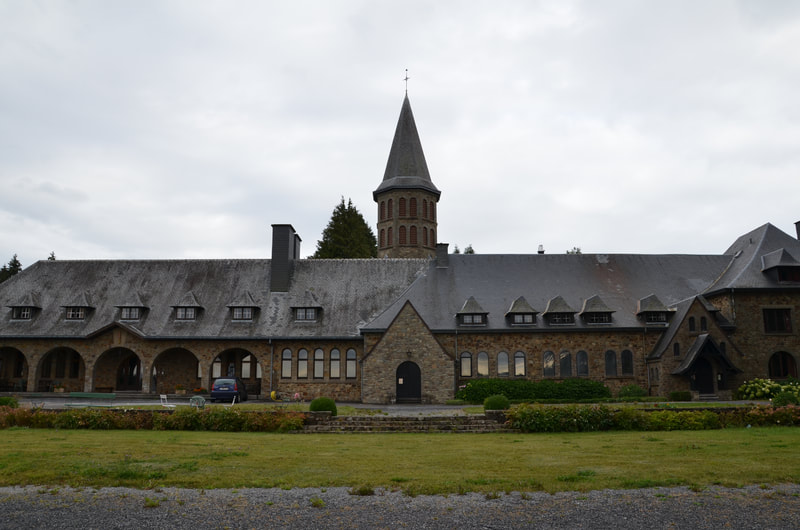 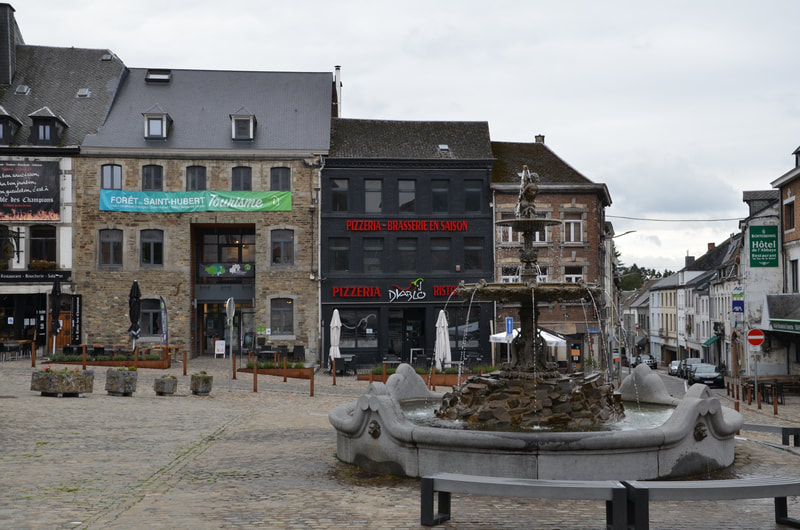