The city fortifications consisted of nine towers, each of which had narrow gaps, allowing guards to control the approach to the city. In the nineteenth century, the ramparts were demolished when they became an obstacle to the expansion of the city. Today, there are only a few traces of fortifying the city, including Simone Tower, also called the Devil's Tower.
Today, the city has about 24 thousand inhabitants. Nivelles is one of several interesting towns in the area. It is also worth going to Waterloo, the place of spectacular defeat of Napoleon Bonaparte, and Villers-la-Ville, with the monumental ruins of the Cistercian abbey. What attracts crowds of tourists to Nivelles is undoubtedly the beautiful collegiate church of St. Gertrude.
After her death, in 659, Gertrude was proclaimed a saint. Over the centuries, her cult grew and the number of pilgrims wishing to visit Nivelles, the place where she lived, increased. Therefore, there was a need to build a larger church that could accommodate all the faithful. A temple was built in the early Ottonian-Romanesque style. In 1046, the Bishop of Liege, Vase, consecrated the church in the presence of Emperor Henry III. Saint Gertrude was chosen as its patron.

This huge collegiate church has two transverse naves and two choirs (presbyteries), which was specific to the churches built at that time. The eastern choir rises above the crypt. The mighty front of the building was built in the 12th century. It has an apse, two chapels on the second floor, a staircase with 132 stairs, a high room called the Imperial Room, an octagonal tower (rebuilt in the Romanesque style in place of the Gothic tower destroyed in 1940), with a belfry with 49 bells.
The collegiate church also has two corner towers. On the southern tower there is a figure of the bell-ringer Jan de Nivelles (Jacquemart), 2,08 m, hammering an hour from 1400 a year. After being damaged during World War II, the figure was renewed in 1984 a year. The southern peak of the eastern transept called the peak of St. Peter was built in the 12th century. The central nave is 102 meters long, making it one of the longest in the world. Under the eastern choir is one of the largest crypts in the region (22 mx 10,4 m). It was built around 1100 a year. It has three naves of equal height, a vault and an apse at the end of the nave.

The archaeological site (VII-X century) discovered during the renovation of the collegiate church ruined as a result of hostilities is unique in Belgium. It shows the foundations and remains of the previous five churches. From the first Merovingian sanctuary (650), with the burial place of St. Gertrude and her parents until the last Basilica of the Carolingians from the 10th century. Excavations were carried out from 1941 to 1952 a year.
Inside the collegiate church, you can admire five sculptures by the 18th-century artist Laurent Delvaux, including a rich oak and marble pulpit that exemplifies the sculptor's mastery, which by juxtaposing contrasting white marble and lacquered wood harmoniously blended three different styles: Baroque, Rococo and Classicism. Also the inner porch protecting the entrance on the south side is the work of Delvaux. It is made of lacquered oak wood, decorated with gilding and topped with statues depicting the virtues of bravery and prudence.
Laurent Devlaux was one of the greatest sculptors of the time. His mastery of combining different styles made him the court sculptor of Charles of Lorraine.

The next works by Devlaux are in the West Wing in the place where the construction of the church began in the 11th century. We can admire two sculptures of this artist here. The first shows the figure of St. Gertrude, patron of the collegiate church. She is shown here in a triumphant way as if in contrast to her true nature, which was calm and humble. The second statue personifies the father of St. Gertrude, Pepin the Elder. The beautiful alabaster-marble altar from 1623 is the work of the sculptor Jan Thonon of Dinant. It consists of ten alabaster reliefs, including: Adoration of the Shepherds and legendary episodes from the life of St. Gertrude. Originally, two statues were also part of this altar: st. Gertrude and st. Peterwhich are currently on display in the Imperial Room. The altar is located in a baroque setting in the eastern part of the church, where the organ once stood.
The procession route is 14 kilometers. Where there are no marked paths, the procession passes through the fields. In the afternoon, when the reliquary is brought back into the church, a fair is held in the main square in front of the temple.

The part is only visited with a guide

Next to the collegiate church there is a monastery of canons, built in the 13th century. Together with the collegiate church, it is the only remains of an abbey founded in the 7th century. This place can only be visited with a guide. Ancient tombstones and bells from the belfry destroyed in 1940 were erected in the monastery yard.
Only with a guide, we will also visit the archaeological excavations located in the basement of the collegiate church, a crypt dating back to the 11th century, and the Imperial Room located 20 meters above the collegiate's courtyard. It takes up the entire internal space (25 m x 8 m) of the west wing (extended, located transversely to the nave, the western part of the basilica, characteristic of pre-Romanesque architecture) on this level.
In this room there are, among others a copy of the 13th-century reliquary for carrying the relics of St. Gertrude (the original burned down in 1940) and panels from the 15th century that used to decorate the cart of St. Gertrude. 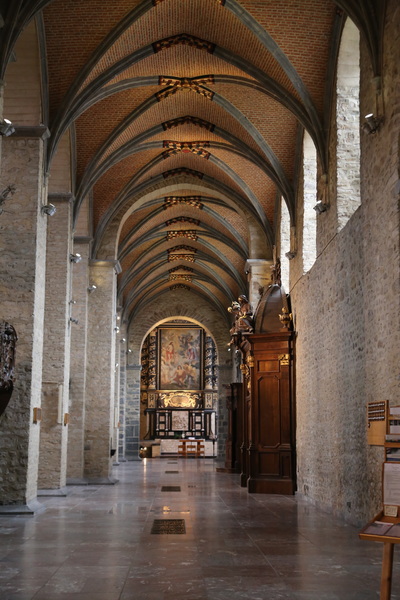 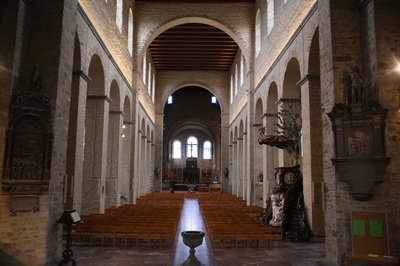 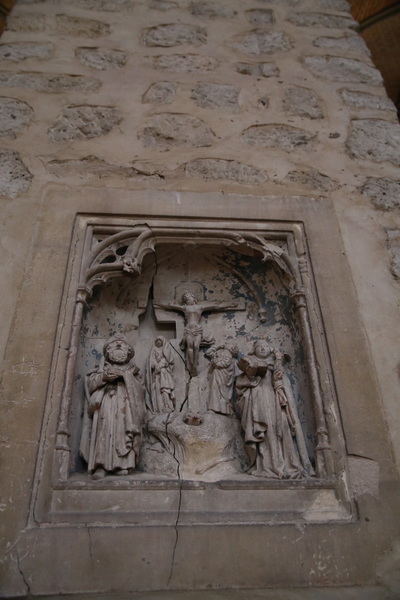 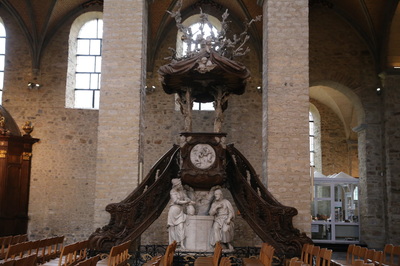 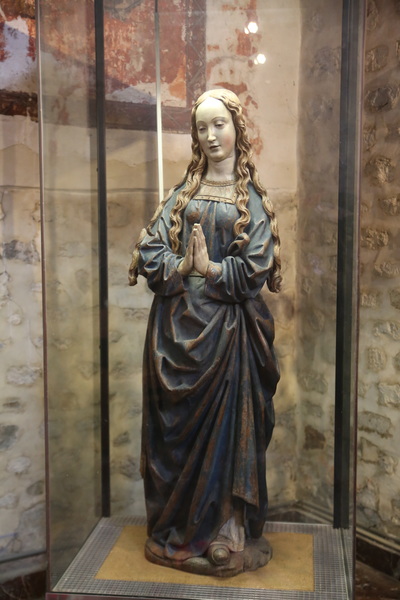 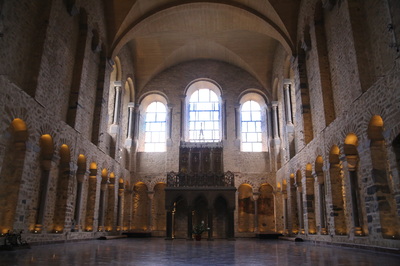 The market in Nivelles

St. Collegiate Church Gertruda is surrounded by a large market. We will find many interesting objects on it. Next to the tower of Jan de Nivelles is the du Perron fountain (Stoop fountain) built in 1523 by Adrienne de Moerbeke. Initially, the fountain was crowned with a statue of Archduke Albert (1618), but then it was replaced with a gilded sculpture of Archangel Michael, patron of Nivelles. Walking along the collegiate church, it is worth paying attention to the top of the transept, called Pigeon St. Pierre, from the 13th century. At Place Lambert Schiffelers there is a beautiful building Palais de Justice (court) built in the neo-Gothic style.

On the market you can relax in one of the many restaurants or continue sightseeing. Walking along the Rue de Charleroi, on the left, we can see a series of small seventeenth-century houses. At Rue St. Georges and Rue des Conceptionnistes next historic tenement houses. Those with the numbers 6, 8 and 10 are from the 17th century, the number 15 is the 14th / 15th century, and the number 18 was built in the style of Louis XV in the 17th century.

The Rue des Bruxelles is home to the Archaeological, Art and History Museum. It is situated in an 18th-century building in a quiet street. We will find here, among others a rich 18th-century collection of Frederic Dumesnil's paintings, antique furniture, very rare terracotta made by Lourent Delvaux as models for his monumental works. In addition, tapestries, paintings, musical instruments, coins, documents and historic objects discovered near Nivelles are exhibited here. 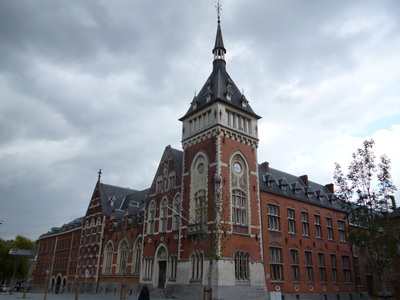 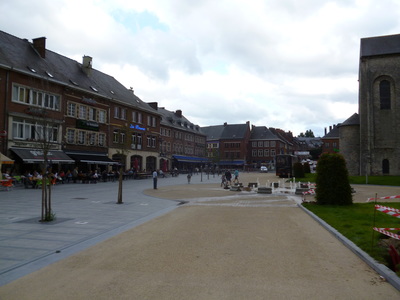 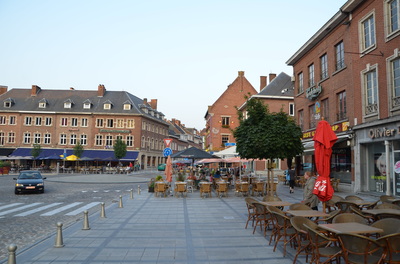 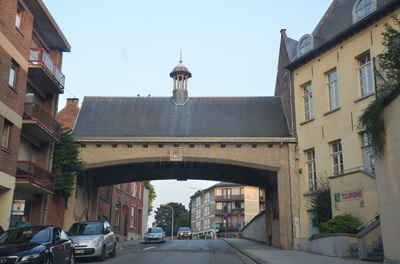 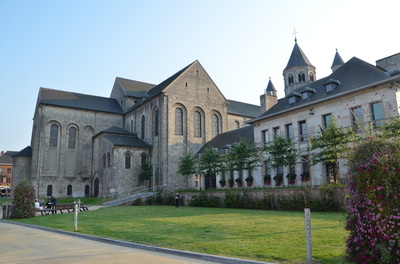 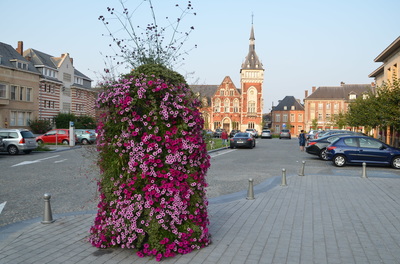 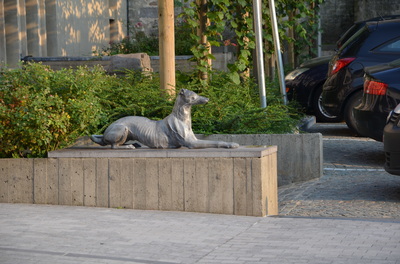 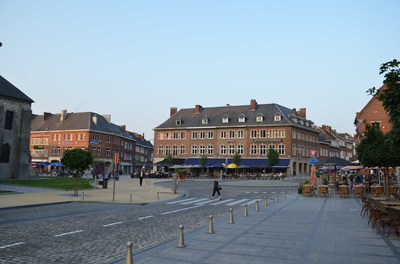 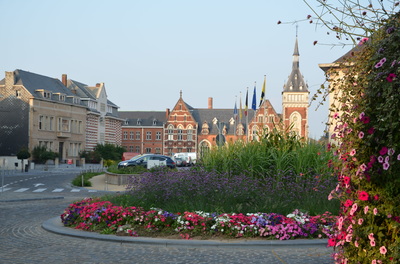