After visiting two of the biggest monuments in Tournai they are undoubtedly a UNESCO World Heritage Site wonderful St Mary's Cathedral and Bell should remain still in the main square of the old town. Here you can see an interesting church of St. Kwintyna and hall.
Church of the Holy. Kwintyna - built in the Romanesque nave of the church dates back to the end of the twelfth century. Transept and choir with a diagonal rib vault is an example of the transition from Renaissance style in Gothic. The chancel is surrounded by seventeenth-century marble balustrades. The central tower dates back to the thirteenth century. Originally the tower was decorated by a double triforium (in buildings of Romanesque and Gothic window or slide-poster divided into three parts, and closed a triple arcade), but during the Second World War was destroyed by German bombing. It was rebuilt in a slightly amended form.
Two round chapels are located in the corners formed at the junction of the nave and transept. One of them is the grave of the deceased in the Jacques Castaigne 1327 year. The second is buried Pasquier Grenier, who contributed to the restoration of tapestries in Tournai. Located in the church organ they were made by the organ builder Delmotte 1986 year.

Cloth Hall, fot. PM
Cloth - is located in the market building was built in the thirteenth century with wood. However, after the complete destruction of 1606, was rebuilt in the 1610 - 1611 stone. Connected here different styles. Ground floor façade adorned with triangular arches are pure Gothic style, the first floor is a renaissance, and the peak is baroque. Internal courtyard with galleries built in the 1616 was modeled on Italian courtyards. Like most buildings market hall suffered during the bombing at 1940 of the year. The 1998 the restored facade of the building. Today held here exhibitions and various events.
Behind the church of St. Kwintyna Rue Perdue find two attractions:
Monument girl named Martine with a dog. These are the characters from the comic is very popular in Belgium in the 60. Drew him two Belgian cartoonists Marcel Marlier and Gilbert Delahaye.
The second is the Red Fort - a medieval building bearing the name of the color of the roof. It was built in the late thirteenth century limestone. It has three levels, one of which was equipped with a projection room, where you can see 10 minute film in the shadow of the ramparts . Fort has a diameter 12 m. 2003 In the year he has been restored. 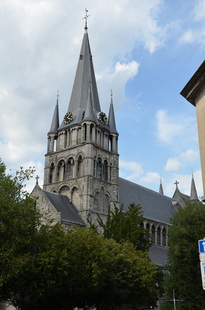 Main Railway Station, fot. PM
Central Station Tournai - building is located in Place Crombez . It was built in neo - renaissance in 1879 year. Plans created the architect Henri Beyaert. At the solemn opening ceremony of the train appeared Belgian King Leopold I. Having the length of 118 meters of glass roof of the station was destroyed during the bombing of the city during World War II.
Over the centuries, architecture Tournai experienced many styles. Despite the devastation of war to the present day it survived here many beautiful churches, palaces and private houses. They represent the style Romanesque, Gothic, Renaissance, and Baroque. Also, fans of art. deco and modernism will find something interesting.
Belgium
EnglishFrançaisNederlandsDeutschEspañoljęzyk polski