In 1621 a patron was chosen for the newly built temple. Ignatius Loyola, the founder of the Jesuit Order, was proclaimed it. His bust was placed at the top of the facade. The whole thing is topped with a pediment with a statue of the Madonna and Child. From there she blesses the world, beginning with the passers-by in the church square. Their dignity is emphasized by a canopy spread over their heads with flying draperies supported by angels. The sculpture was made by Hans van Mildert.

Inside the facade is the coat of arms of the Jesuit Order, attracting attention by placing gold letters on a black background. The coat of arms is a wonderful sculpture of angels. It is the work of Rubens himself.
There are statues of evangelists in the niches of the side bays. We recognize them by the symbols on the bases. On the right-hand side, Luke, whose symbol is an ox, in the lower right-hand corner, Mark with a lion. On the opposite side, at the top, looking at heaven, John with the eagle, below Matthew with the angel. Below are two sculptures of the Apostles, Saints Peter and Paul. 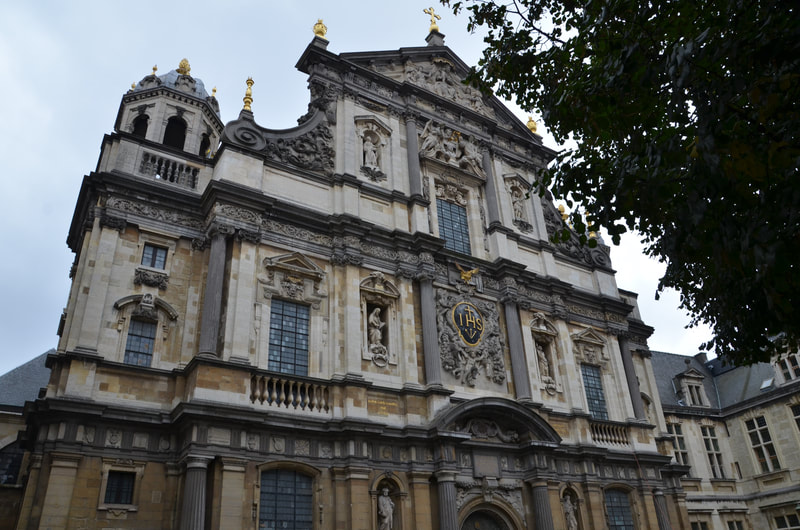 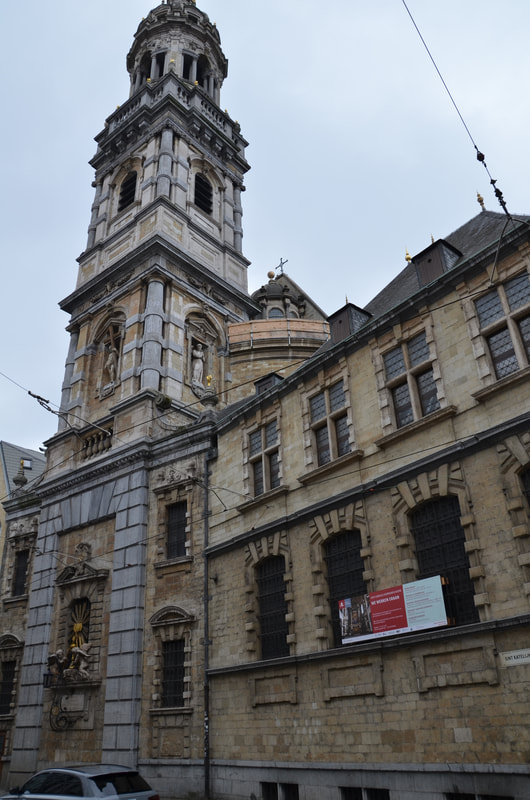 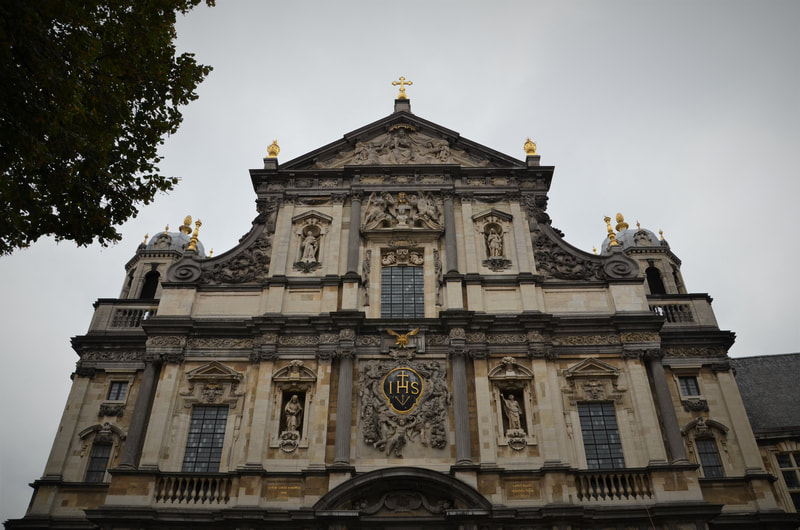 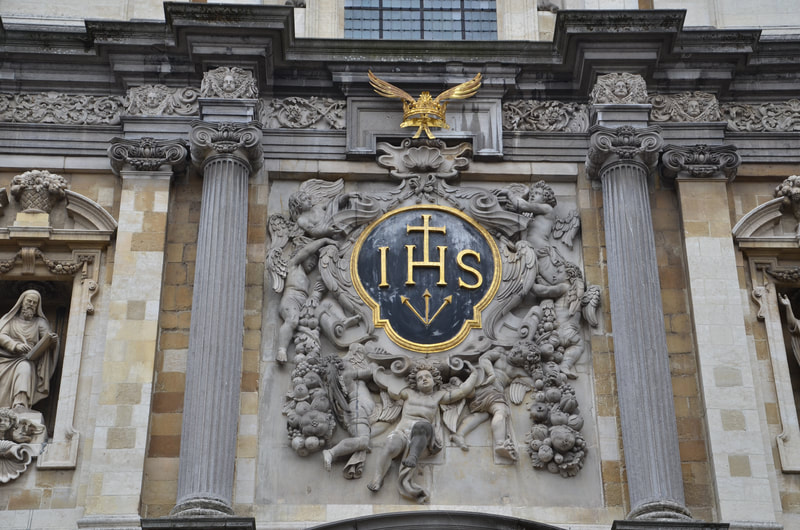 58-meter tower of the Church of St. Charles Borromeo is a pearl of baroque architecture. Its location at the back of the church, next to the apse, is special for the Baroque style. This was to prevent the symmetry of the facade from being broken. The author of the project is Pieter Huyssens, who was inspired by Rubens' works in the years 1617-1621.
In 1620 Rubens, together with the artists from his studio, began work on 39 paintings decorating the ceiling of St. Charles Borromeo. At that time, the champion's most important assistant was the 21-year-old Antoni van Dyck. After a fire in 1718, there is no trace of these paintings. Rubens' artistry can be admired in his chapel, in which he decorated the ceiling. The painting above the main altar and part of the facade were also made by his hands.
Two long rows of wooden confessionals were created by Jan Pieter van Baurscheit I. He decorated them with figures of angels and twenty medallions describing the lives of two saints important for the Jesuit Order: Ignatius of Loyola and Francis Xavier.

Jan Pieter van Baurscheit I is also the author of the magnificent oak pulpit, an allegory of the triumphant church, which rests on a figure crushing the monsters of falsehood and ignorance, along with masks of deceptive appearances. The figure of a woman has helpers in the form of two boys who use lightning bolts to push defeated monsters into hell. The allegory is easy to understand due to the existence of Latin inscriptions. The platform contains six medallions depicting the life of the Virgin Mary. 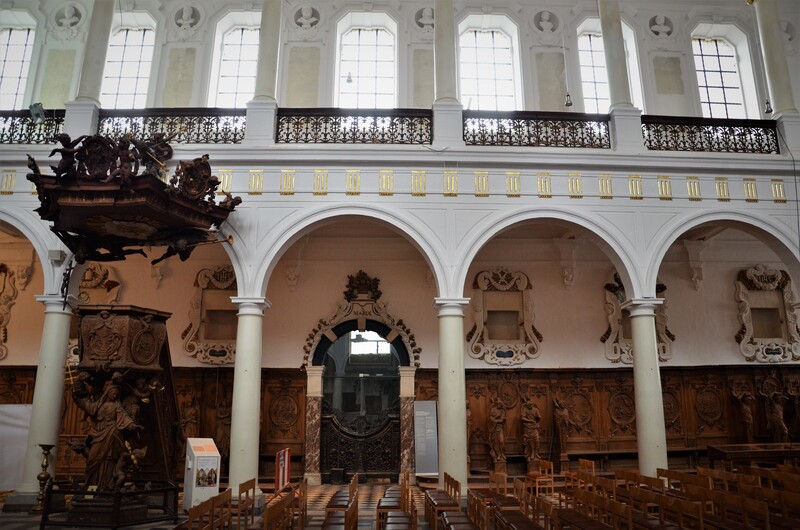 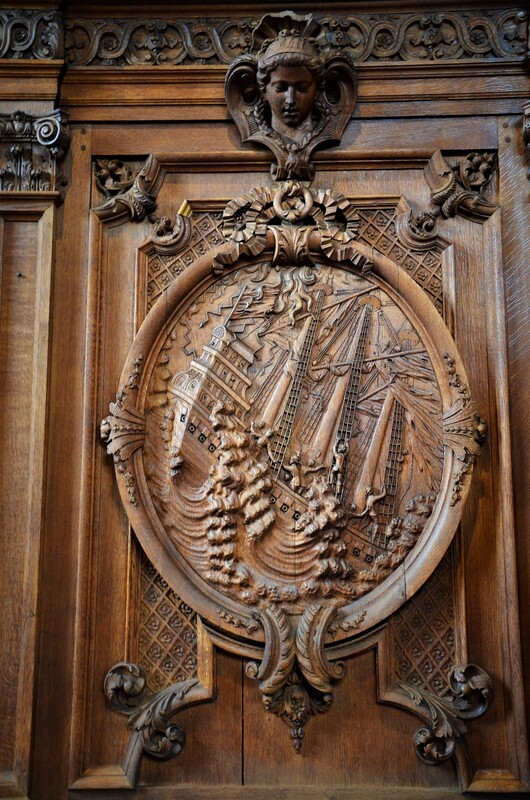 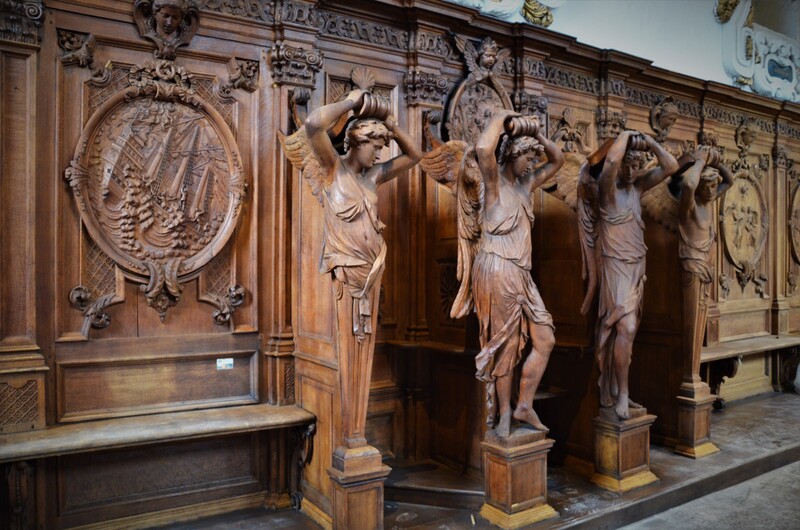 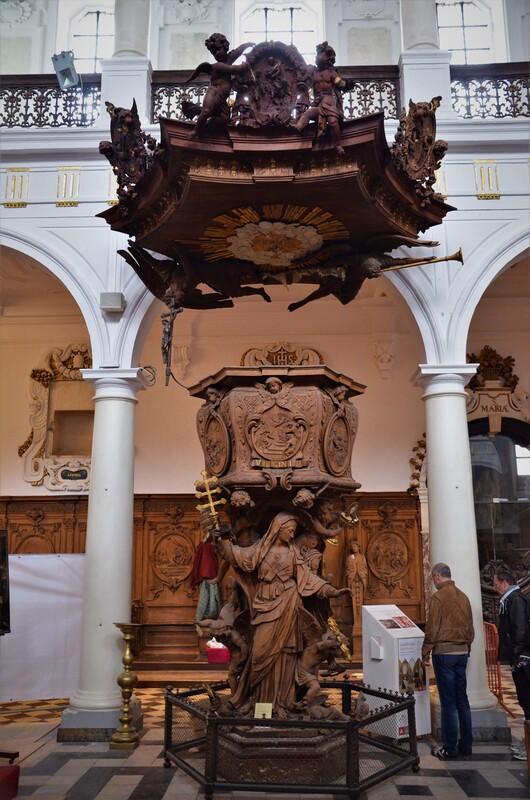 Monumental altar in the church of St. Charles Borromeo has a system for changing huge images. It is a powerful reservoir located behind the altar. Each image is placed in the central part of the altar, by means of a pulley, according to the theme of the liturgical year.
Two masterful works by Rubens: Miracles of St. Ignatius and Miracles of St. Francis Xavier, which are part of this magnificent altar, were taken in 1776 by the Empress Maria Teresa of Austria to Vienna. Today in the altar we can admire alternately: Raising the Crossby Gerard Zegers, Coronation of the Blessed Virgin Cornelis Schut, and a painting from 1840 Our Lady of Mount Karmel, painted by Gustave Wappers.
The most prestigious in the whole church is the Chapel of the Virgin Mary, also known as the Tomb Chapel of the Houtappel Family. It was established right after the consecration of the church, thanks to the patronage of the three Houtappel sisters from Ranst, who lived according to the spiritual principles of the Jesuits.

All the stucco work on the ceiling of the chapel is the work of Rubens himself. The statues of the six saints were made by the Colyns-De Nole studio. The chapel is also delighted with wonderful ornaments made of white marble and huge wooden confessionals. The painting on the main altar is a copy of Rubens' work Assumption of the Blessed Virgin Mary, from 1613. The original created for the Department, finally after a decade, found its way to the Church of St. Charles Borromeo. In 1776 the work was bought by Empress Maria Teresa and taken to Vienna. 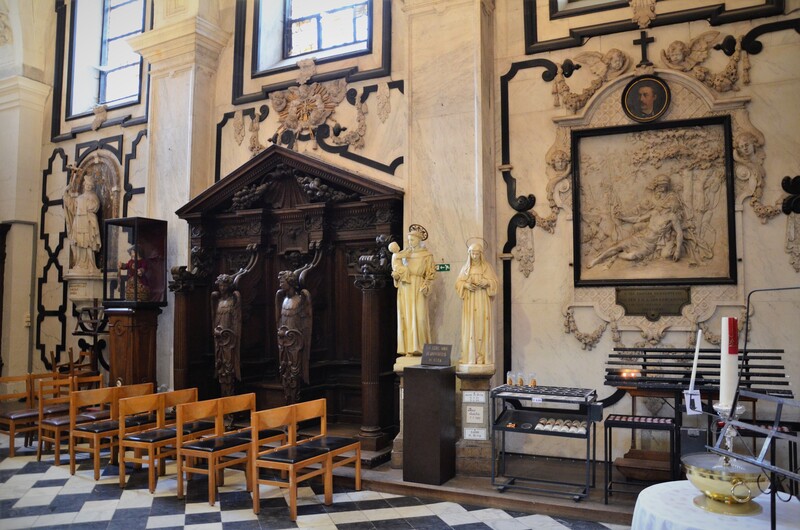 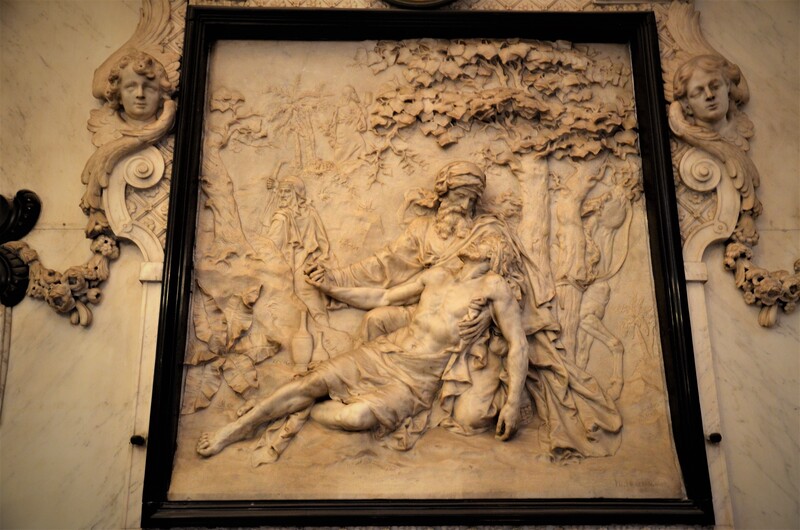 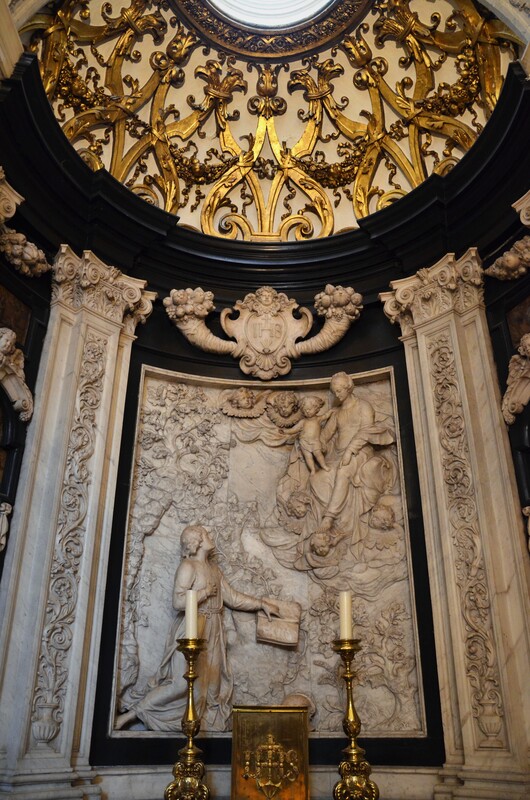 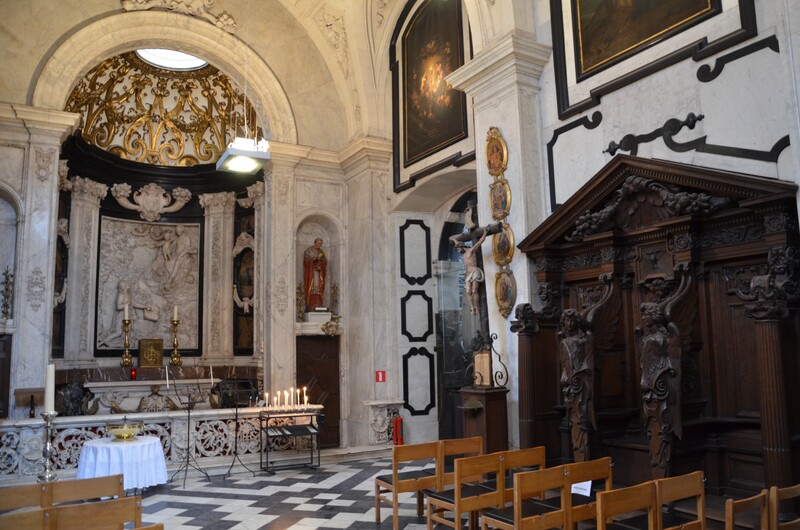 On the opposite side, the Chapel of St. Ignatius was built at the same time as the Chapel of Saint Mary (1621-1625). It is much more modest, but also worth attention. It should be especially dedicated to the altar balustrade made of white marble. This magnificent work is believed to have been created by Alexander Van Papenhoven around 1720.

Here we can see a sacrificial lamb lying on top of a closed book, sculptures of angels, and medallions depicting the main Jesuit saints, which are: Alojzy Gonzaga, Francis Xavier, Ignacy Loyola, Franciszek Borgia and Stanisław Kostka. Each of them has the right attributes.
The church also has a lace room with a rich collection. Undoubtedly, the greatest treasure is the tablecloth, made about 1621 year, for the church of St. Charles Borromeo. It was used to covered an altar railling (from the 17th century, the faithful began to receive communion at the communion railing, which was covered with a white cloth). It presents scenes from the life of Saint Ignatius.
src = "/ files / theme / custom.js">
EnglishFrançaisNederlandsDeutschEspañoljęzyk polski