The temple was funded by the priest of the cathedral of Saint Lambert, Godescalc de Morialmé, during the reign of Prince-Bishop Baldéric (1008-1018), successor of Notger. It is a valuable testament to the Romanesque architecture of the Rhine-Mosaic style. Built outside the city walls on the initial plan of the Latin cross, the collegiate church was rebuilt several times. The eastern choir (presbytery), with a flat end wall, dates from the end of the 11th century. Transept and three naves were added at the beginning of the 12th century. The huge western wing ("Westwerk") forming the front part was built last, around 1170-1185. The church was restored in the 14th and 16th centuries and modernized in the 18th century.

After the reconstruction of the choir (around 1706), two additional aisles were added (around 1735-1748), and a monumental portal was carved in the main facade, which replaced the original side entrances. The building is topped with a vault, and from the inside it is covered with stucco and painted decorations. After the dissolution of the collegiate chapter (1797), the church of Saint Bartholomew was converted into a military magazine. The collegiate church was restored to the religious cult in 1803 a year, since then it was a parish church. Her possession was then increased by the famous baptismal font from the Notre Dame-aux-Fonts church (one of the "seven wonders of Belgium"), a carillon from the Val-Saint-Lambert abbey and a beautiful set of sculptures from the Saint-Thomas parish church, destroyed at the beginning XIX century. In the years 1999-2006 the church underwent a thorough renovation. 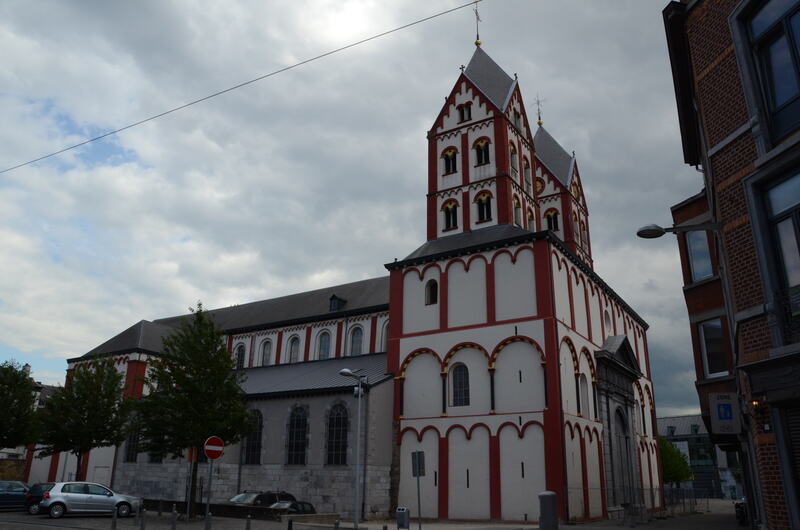 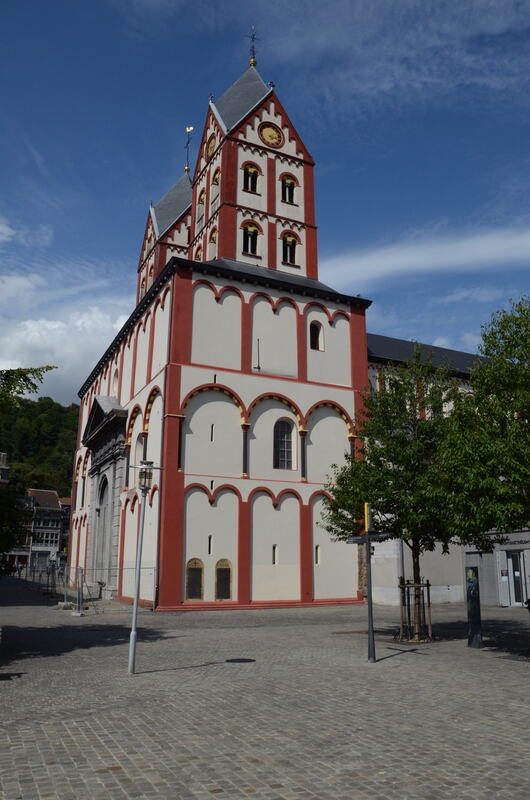 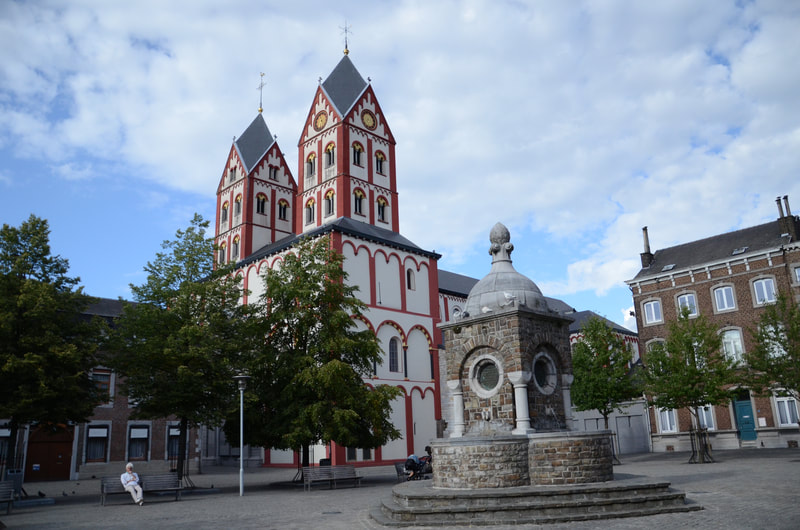 On the sandstone walls of the transept and the central nave, there are decorations in the form of pilaster tiles (a flat vertical projection in the outer wall). characteristic of the Romanesque architecture of the Meuse region. The protruding vertical pilaster strips alternate with semicircular niches and are topped with an arcade frieze running under the cornice (the so-called Lombard system).

Westwerk, rising on the west side, also made of sandstone, is a unique example of a 12th-century Romanesque style from the Meuse region. It has the shape of a cuboid with dimensions: height 22 meters, length 28 meters, depth 12 meters. Lizens and arcades, leaning on narrow columns of limestone, diversify its three-level facades. The mighty block of Westwerk forms the basis for two twin towers, built on an almost exact square plan. The towers have two floors with double, decorated windows (biforias) and, as before, are decorated with pilaster strips. The towers are crowned with triangular gable pediments and a hip roof with diamond-shaped tracts. 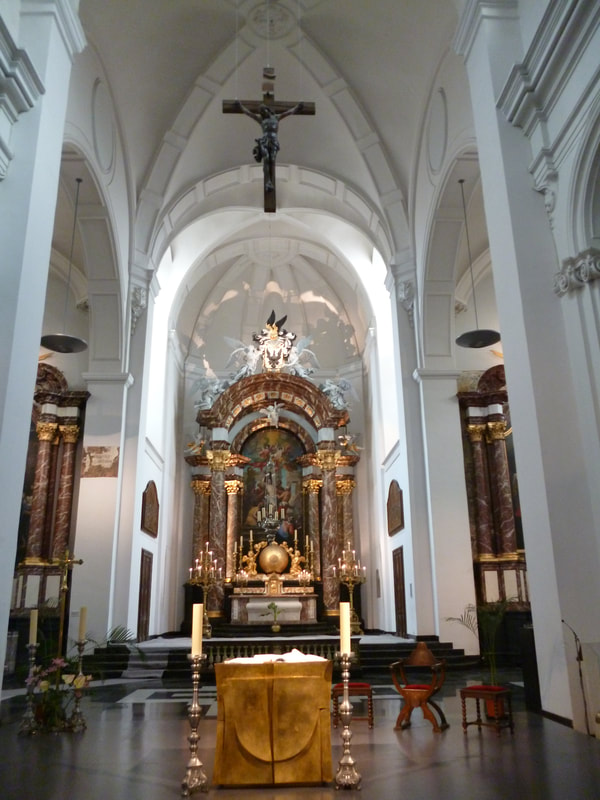 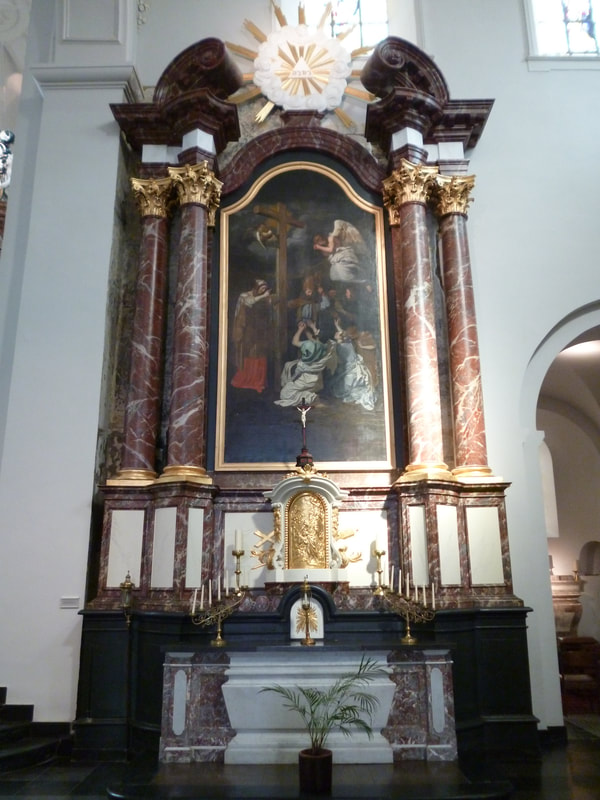 In the presbytery there is the main altar decorated with the painting of Englebert Fisen (1655-1733), depicting the martyrdom of St. Bartholomew. Many works of art have been gathered in the five naves of the church. In the right part of the transept we will find a picture Exaltation of St. Cross , who painted the most talented painter of the 17th century, in Liege, Bertholet Flemal (1614-1675). A picture hangs in the left part of the transept Crucifixion from 1684 year written by Engelbert Fisena. This painting, created for the main altar in the Sainte-Madeleine church, is considered one of the greatest achievements of this seventeenth-century painter. In the old altar, visible in the right side aisle, you can admire the Last Supper (1708), a picture painted by Theodore - Edmund Plumier (1671-1733). 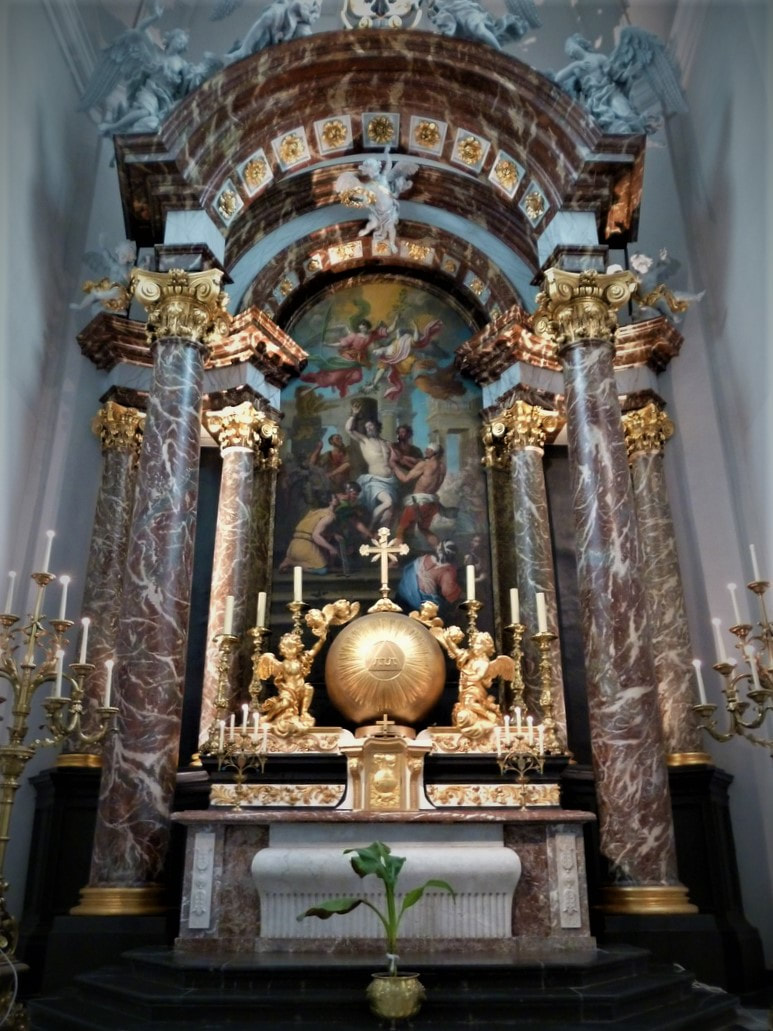 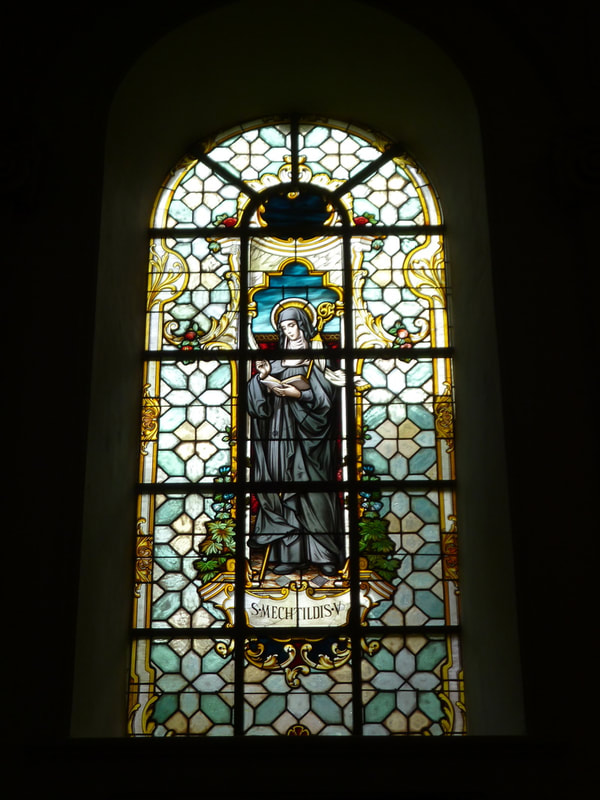 You can also admire the wooden sculptures painted in imitation of white marble. Here you can see the sculptural artistry school, the eighteenth-century Liege. The monumental organ, completed in January 7 1852 year, are the work of factory Merklin and Schütze. Joinery organ is the work of sculptor PN Radino.
The most important treasure in the collegiate church is undoubtedly the baptismal font, it ranks among the seven wonders of Belgium. It comes from the church of Notre Dame - aux - Fonts. Located near the Cathedral of Saint - Lambert church of Notre Dame was the baptistery. Both churches were destroyed in the period that came after the French Revolution and ended the time of independence Liege. The lid of the font, which, like the tub was to be made of brass, and are decorated with figures of prophets and apostles, disappeared. Baptistery is a great example of a skilful combination of elements of antiquity, Byzantine art and traditions mozejskiej. The only theme that is repeated in five successive stages in the form of wypukleń on the wall of the vat, is baptism. 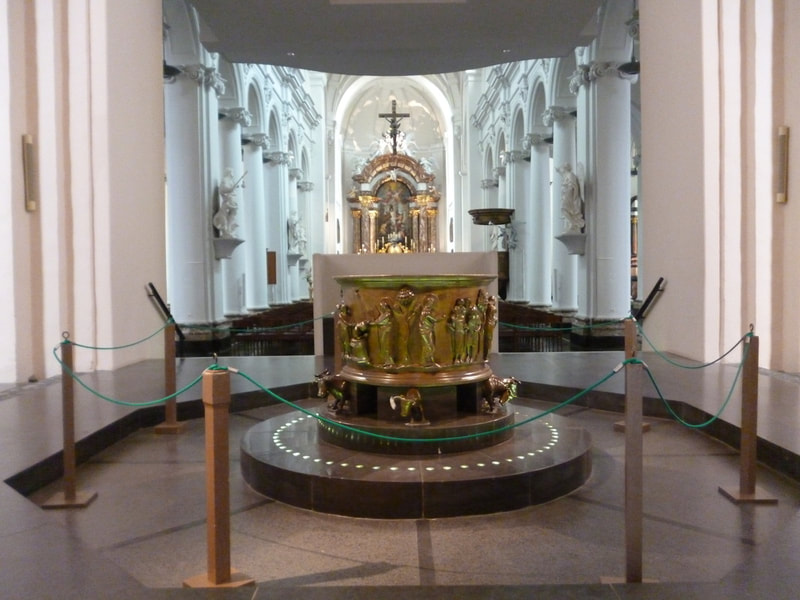 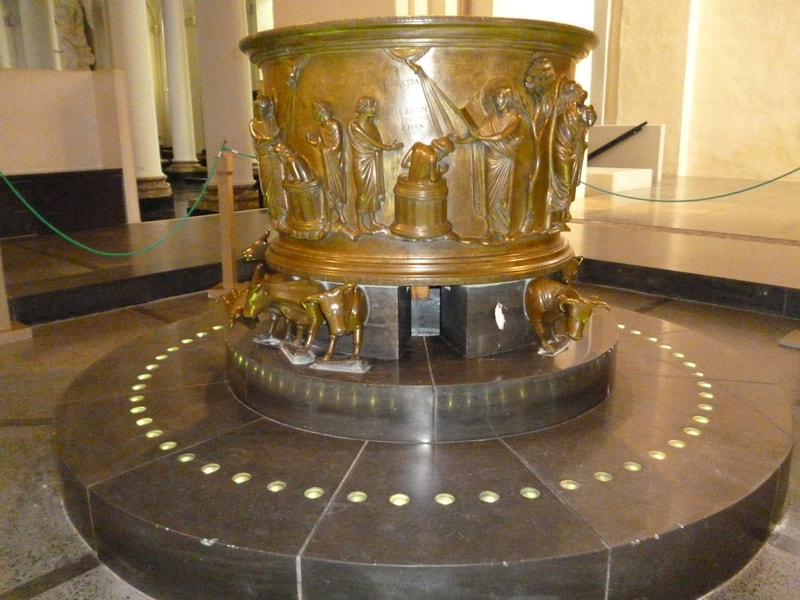 The vat is set on a stone pedestal and appears to be supported by oxen, of which there were originally twelve (ten remained). They are the symbol of the twelve apostles. Stylized trees bear signs of Byzantine influence. They separate most of the scenes and at the same time constitute a transition between them. In all the scenes, the central figure - preacher or baptist - is slightly higher than the other people around her. This type of presentation was eagerly used in folk art of all times and countries, but here the artist composed the scenes in such a way that this disproportion seems natural. Inscriptions carved on the ladle identify all heroes. We have here: the prophecy of John the Baptist, the baptism of a neophyte or the baptism of repentance, the central scene the baptism of Christ, the baptism of Cornelius, the baptism of Kraton.

The font was made using the lost wax method. It consists in the fact that the model made in wax is carefully covered with clay. After drying, the mold prepared in this way is burnt on fire. At this stage, the wax that flows from it flows out lost.   Then molten brass is poured into the mold. After cooling and removing the clay, it is sanded with fine sand and then covered with a thin gold coating.
src = "/ files / theme / custom.js">
EnglishFrançaisNederlandsDeutschEspañoljęzyk polski