Main Market
Grote Markt is the heart of Antwerp. Here, all paths interweave in the center of the old town. In 1220 the year, prince I Brabant (1165-1235) donated the land on which this wonderful square stands, to the city. In the Middle Ages, numerous fairs and Brabant markets were organized here. Here, English merchants did business with arriving buyers from Italy, Spain, or North German Hanseatic cities. The beauty and splendor of the surrounding tenements, as well as the monumental cathedral testify to the bloom and richness of medieval Antwerp, which in the fifteenth century overtook Bruges, becoming the most important city in the Netherlands.
Fountain of Silvius Brabo stands in the center of the market. Its plinth consists of, seemingly, randomly stacked stones, on top of which stands a bronze statue of Silvio Brabo. He is presented here when he throws a hand of the giant Antigonus to the Scheldt River.
According to the city legend, the giant Antigonus collected duty from all ships sailing nearby. Anyone who refused to pay was cutting off his hands. He soon became the terror of the sailors. This situation took place until the brave Silvius Brabo challenged the giant to a duel. He cut off the hand of defeated Antigonus, which then threw into Scheldt. According to legend, this event contributed to the creation of the city name, which literally means   thrown hand. 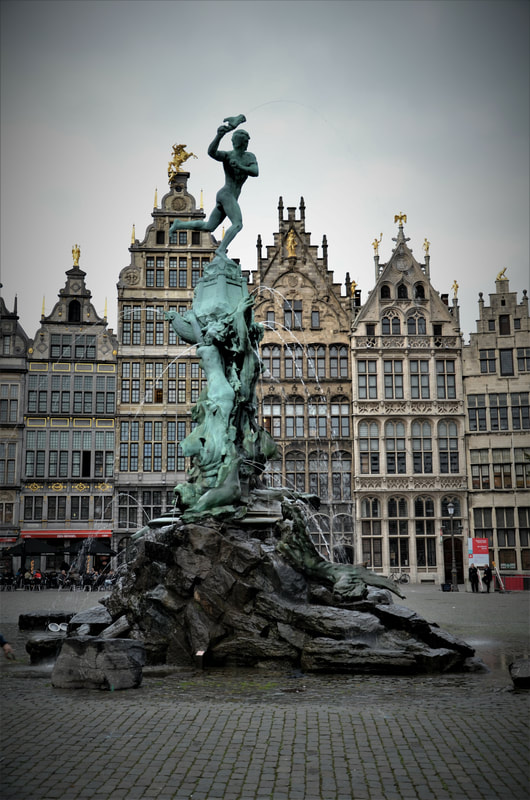 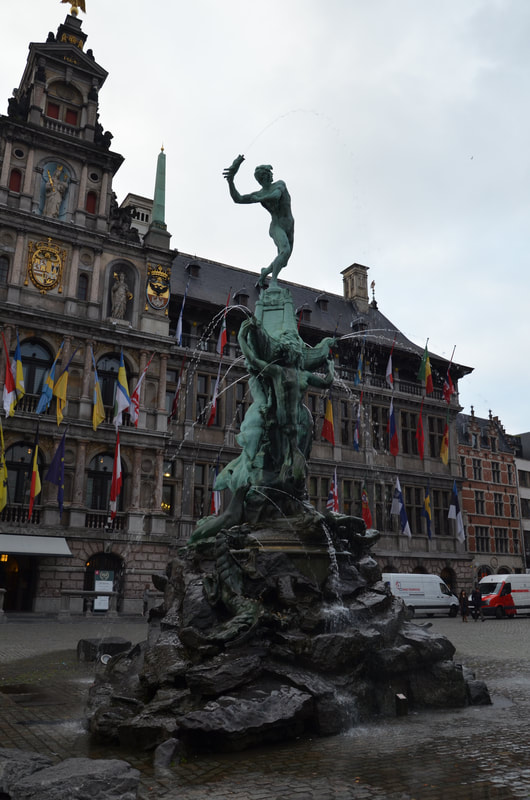 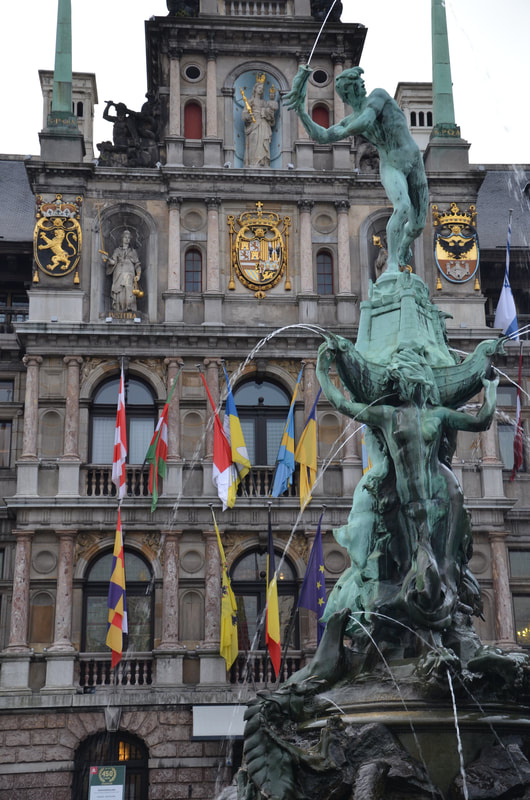 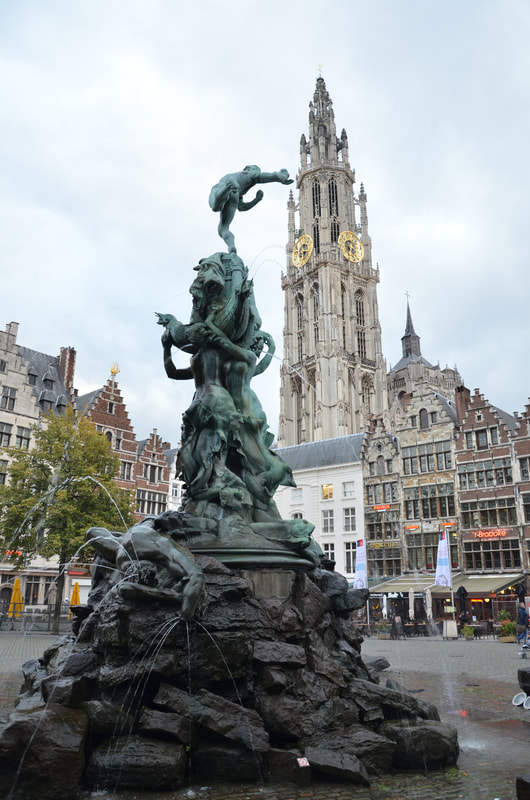 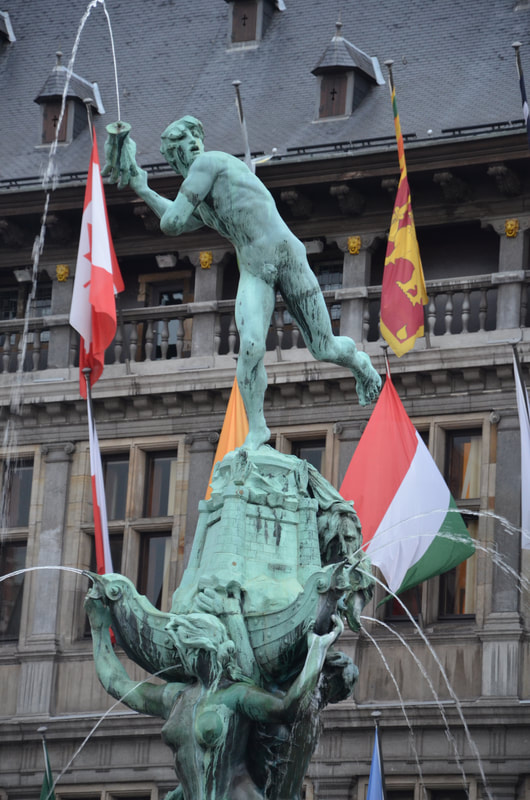 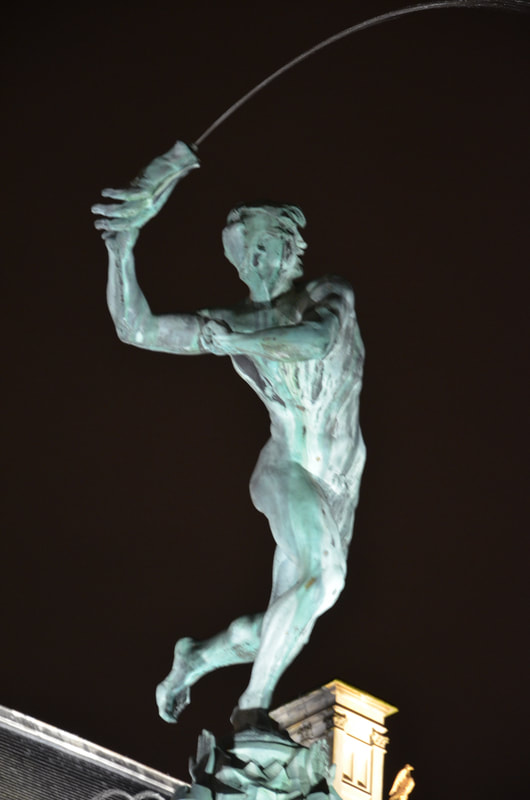 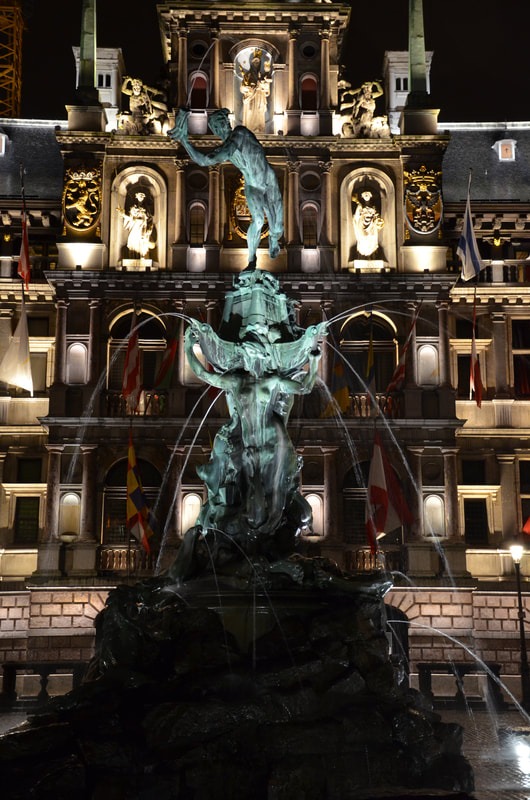 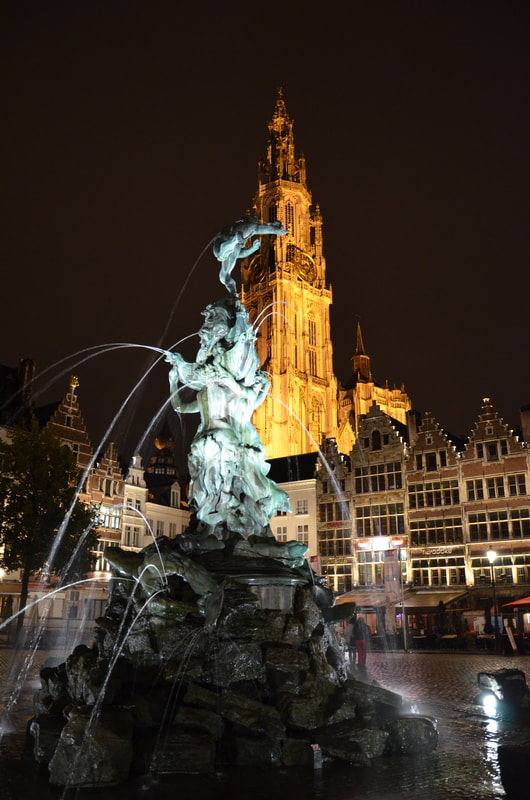 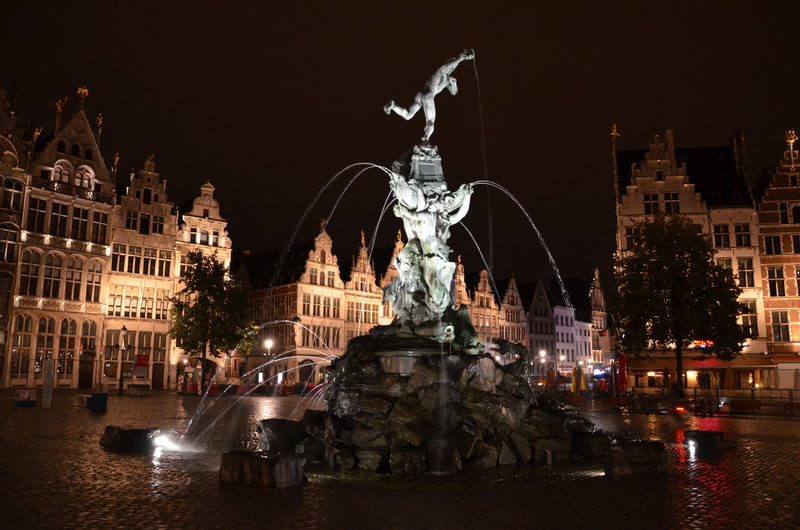 On the north side of the square there are beautifully restored sixteenth-century tenement houses, so-called guild houses. Decorated with bas-reliefs corresponding to the purpose of the house and topped with gilded statues.
Town hall   standing on the opposite side of the market is a real work of art, one of the finest examples of the Renaissance in the Netherlands. Its construction was begun in the year 1561, according to the novel project of Cornelis II Floris de Vriendt. After four years the town hall was ready. The facade of this beautiful building is decorated with numerous statues and coats of arms.

The facade of the town hall is decorated with slender pilasters, and in the middle with columns Ionic and dorian. 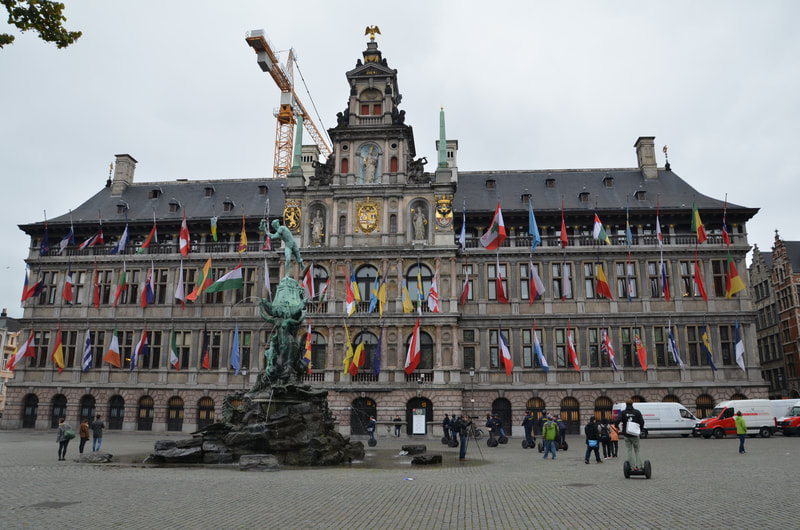 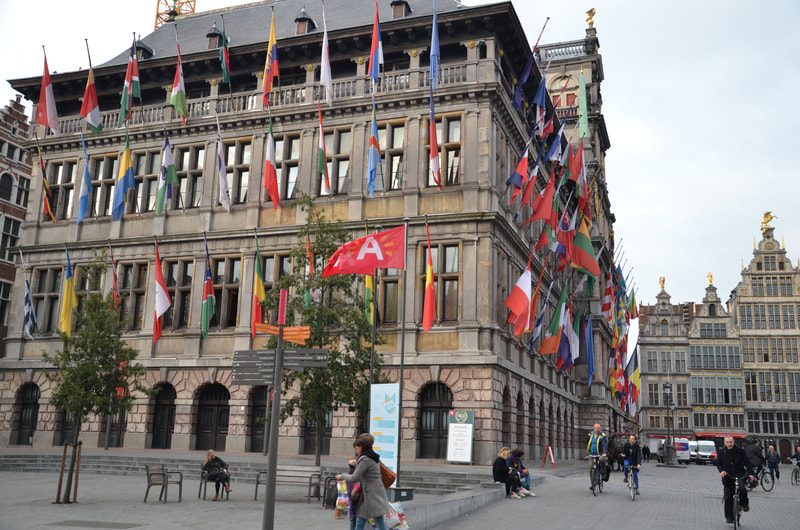 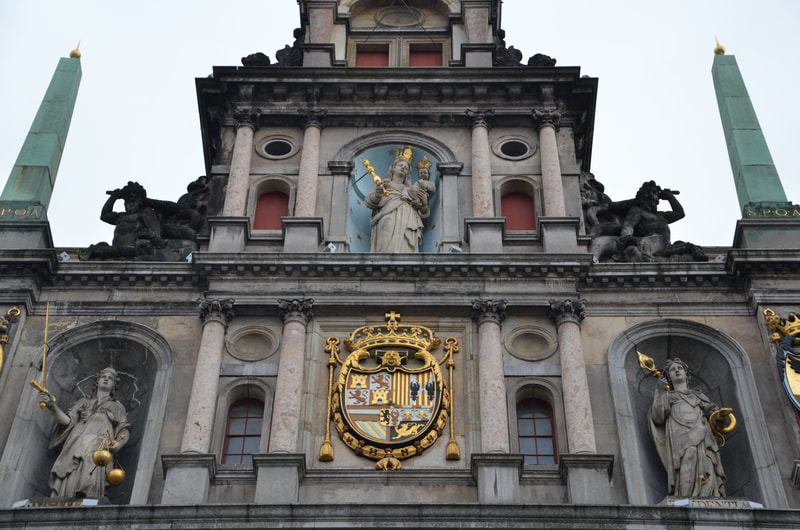 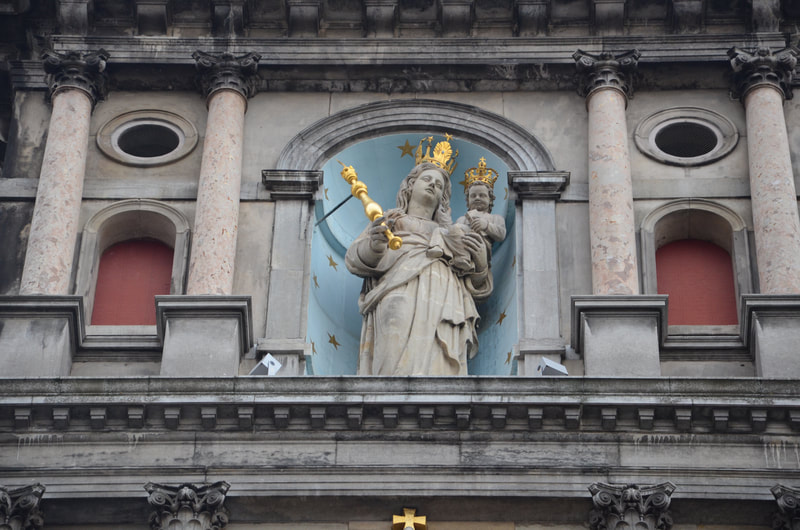 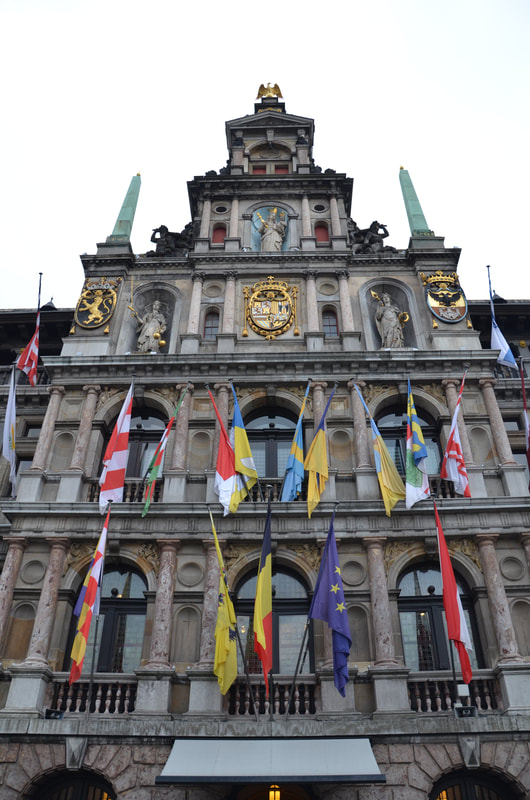 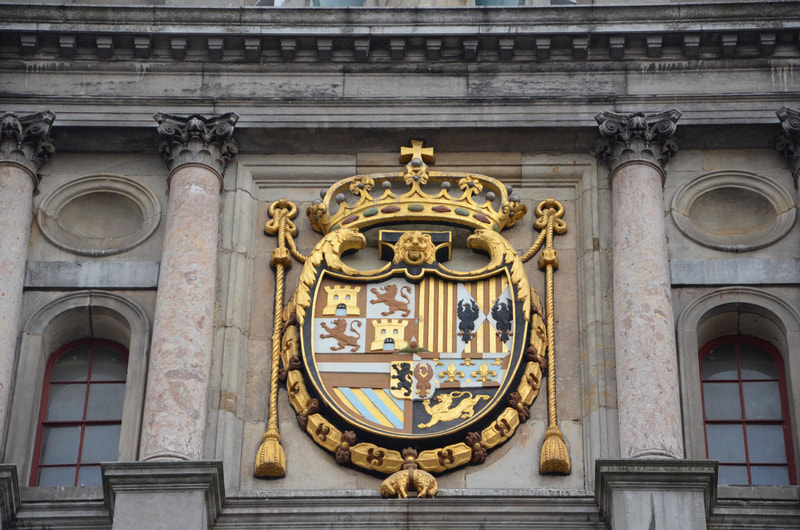 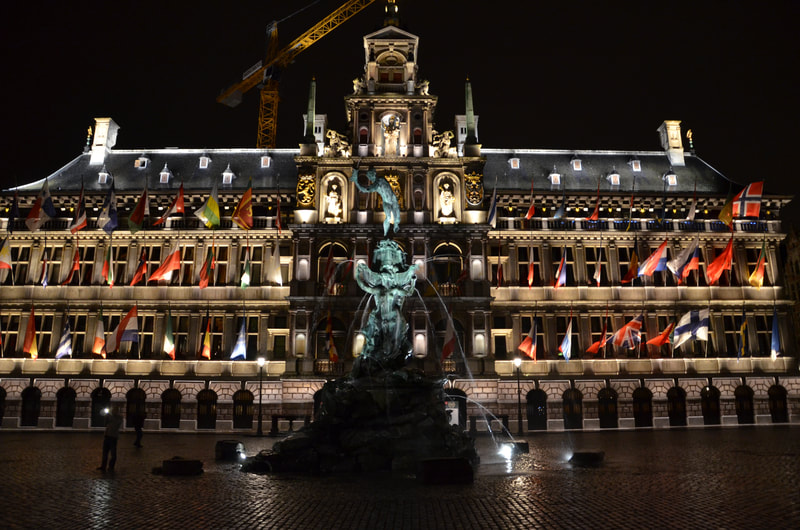 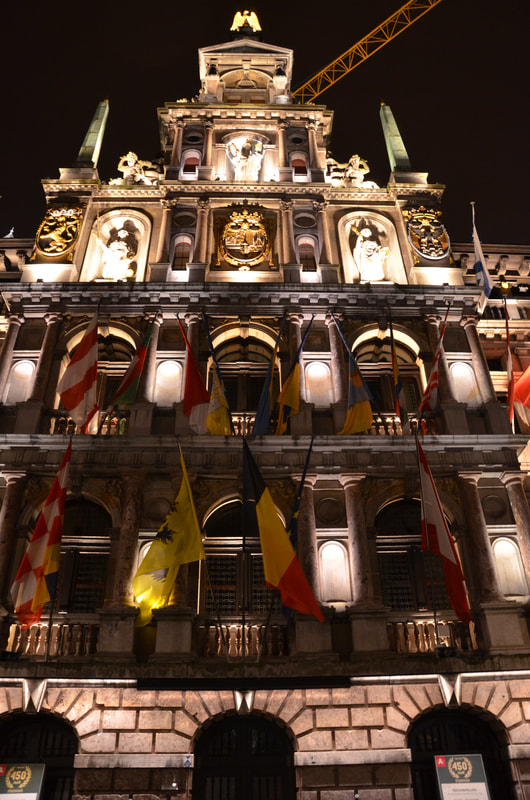 In the second and third floor risalit are magnificent, semicircular portes-fenenetres Which replace the rectangular windows. On the fourth floor you see high pedestals forming the base of obelisks with coats of arms of Brabant, Belgium, and the city. In the niches placed between the arms of the sculpture being an allegory of Justice and Wisdom. In the niche on the upper floor there is a statue of the Virgin Mary with Child. Sculpted in 1587 year by Filip de Vos. At the top of the building there is a triangular pediment with the date 1564. The whole is topped with a sculpture of an eagle, whose head is facing in the direction of Aachen.
The interior was renovated in the 19th century to meet modern requirements. A courtyard was roofed, stairs were added. The walls of the interior are decorated with numerous portraits of painters, mayors and monarchs. It is worth seeing the Leys Hall, named after Baron Hendrik Leys. In the year 1860 he painted frescoes adorning her. Equally interesting is the Wedding Hall, in which there is a fireplace, coming from the original town hall, decorated with two alabaster caryatids (architectural support in the form of a female figure, carrying on the head architectural element of the building) made by Floris himself. In year 1999, the town hall was inscribed on the UNESCO World Heritage List.
The whole effort was put into his reconstruction and plans to expand the second tower, which only reached half of its height, were abandoned.   In year 1559 the church became the main church of the Antwerp bishopric and obtained the title of the cathedral. He lost it in 1801-1961, when the bishopric was liquidated.

The fire of 1533 year, the iconoclast attack of 1566, and the fact that in 1581 the church passed under the administration of the Protestants caused that no element of the medieval interior of the temple survived.

In 1794 during the French Revolution the church was again plundered and destroyed. The French authorities in the year 1798 wanted to demolish of this magnificent building. Fortunately, the occupation did not last long and already in 1816 a year stolen treasures began to return to the temple. The contemporary interior is a Baroque style. There are countless excellent sculptures and paintings in the church. All of them, however, remain in the shadow of Rubens' excellent work. 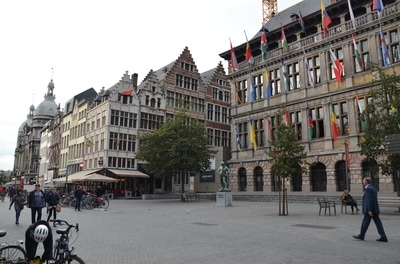 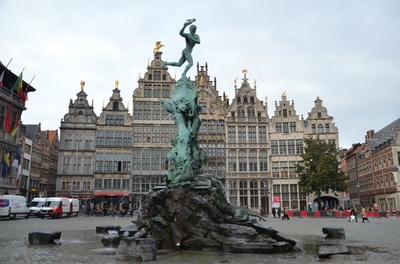 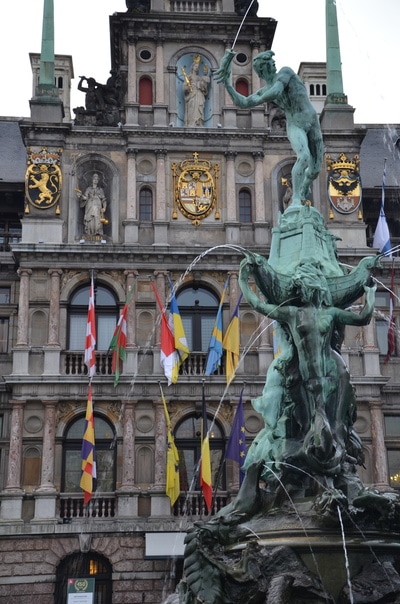 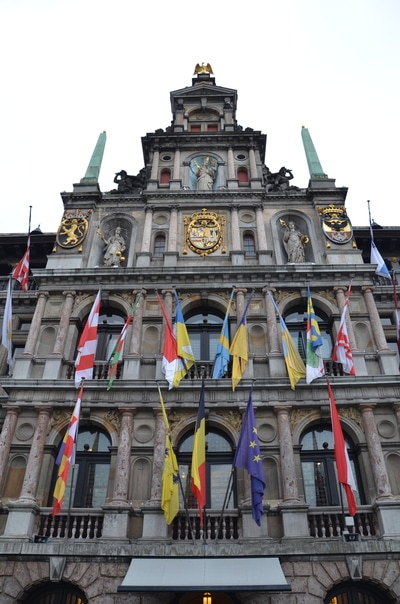 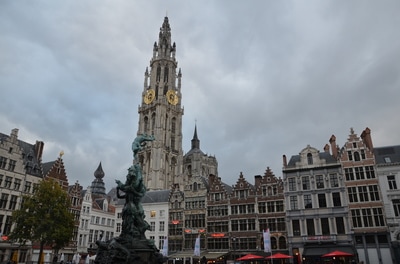 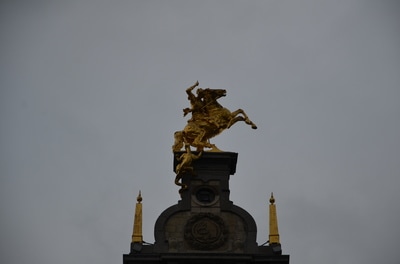 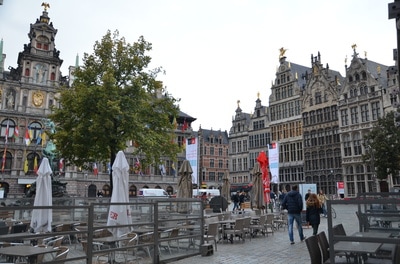 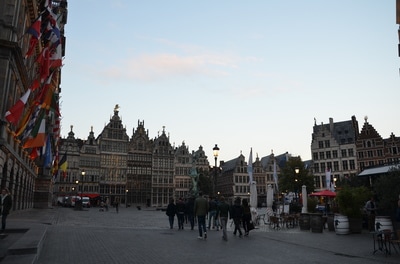 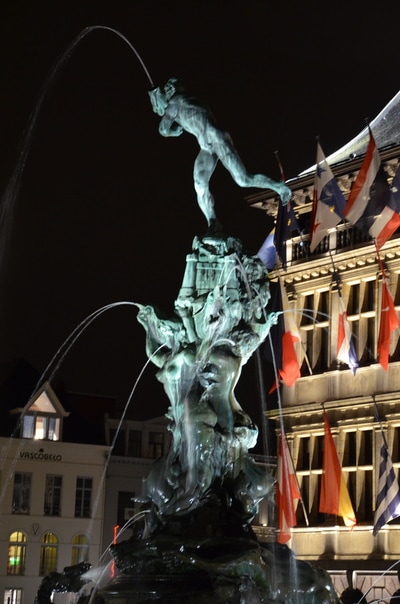 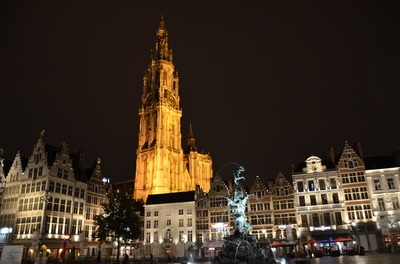 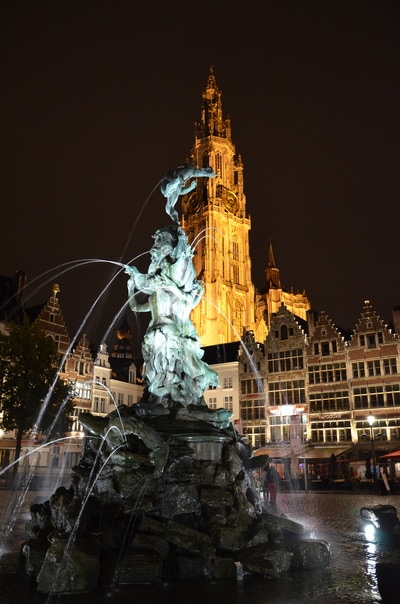 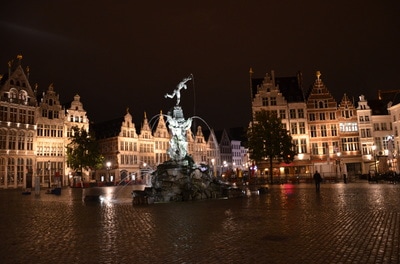