La Grand Place is an outstanding example of the eclectic combination of architectural and artistic styles that characterize the culture of the region. Over the centuries, the market has retained its shape and the characteristic Gothic and Baroque features. All conservation works, since the nineteenth century, were carried out with great care to preserve the original appearance of the renovated buildings. The unique charm of La Grand Place and care for its historic appearance caused that in December 1998 it was inscribed on the UNESCO World Cultural and Natural Heritage List.

In the early Middle Ages it served as a market square, but when the town hall was built in 1444, it became the heart of Brussels. The competing features of cloth and haberdashery traders, crossbowmen, coopers, furniture carpenters, brewers and rafters set here specific symbols of their position, decorated with golden facades, snail peaks and fancy statues. 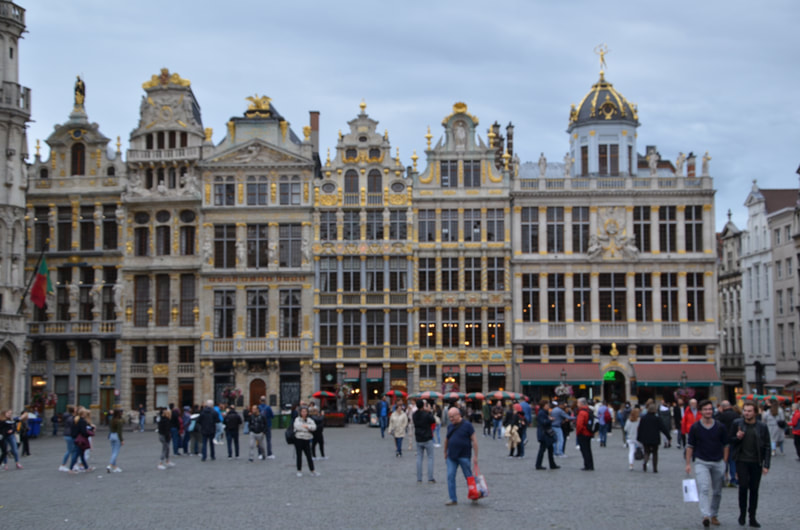 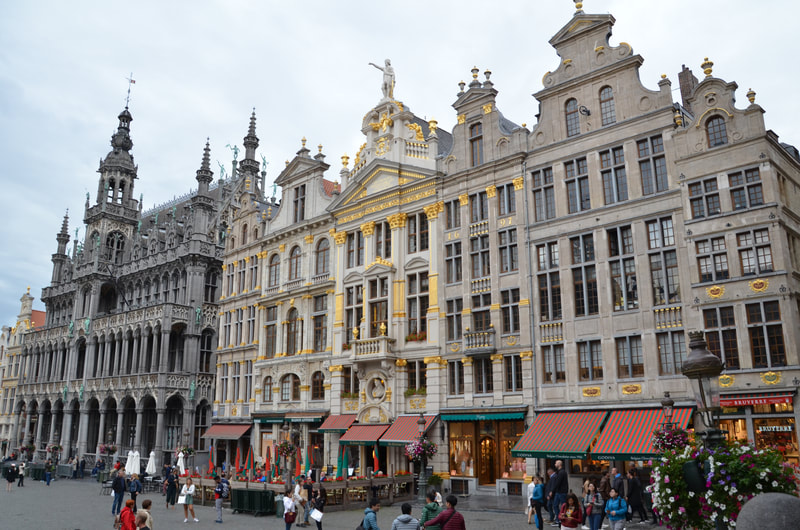 The narrow, crowded streets hide lovely pubs and restaurants serving dishes typical of the region. One of the greatest monuments on La Grand Square is undoubtedly the City Hall (Hôtel de Ville).
A towering 97 meters high was built. 420 stairs lead to its top. It is decorated with a gilded statue of the patron of Brussels, Saint. Michał, fighting the devil. 203 statues decorating the town hall were added at a restaurant held in 1840 a year. They depict the figures of princes and princes of Brabant ruling in the years 580-1564. Today, the town hall is the seat of the mayor of the city. The interior can be visited with a guide. On the first floor, there is the Council Hall, where the meetings of Brussels guilds were held. You can admire the most famous Brussels tapestries from the 15th, 16th and 17th centuries. In the very center of the town hall there is a zero point from which all distances in Belgium are measured. 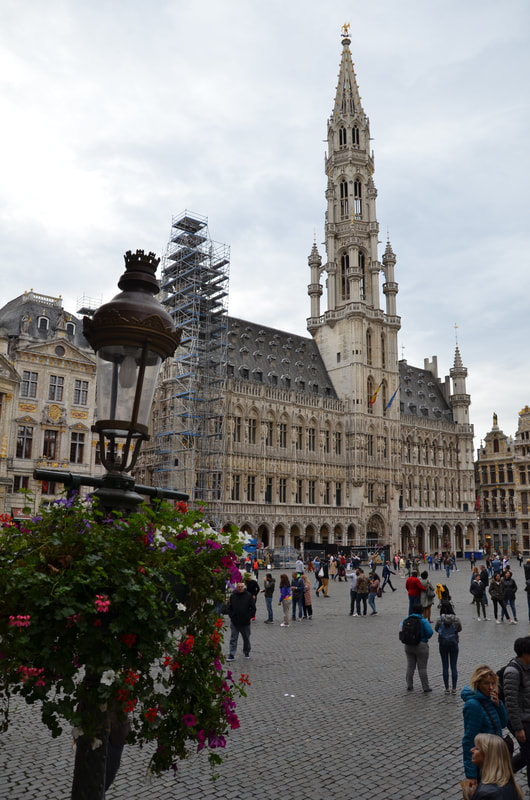 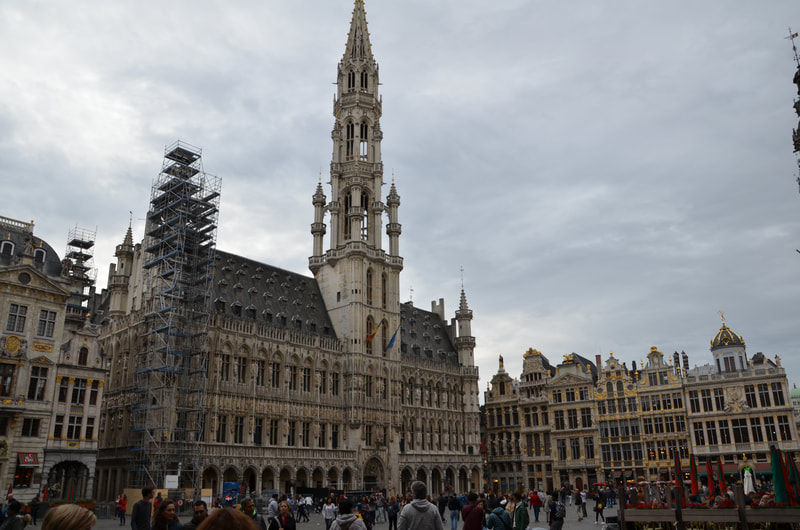 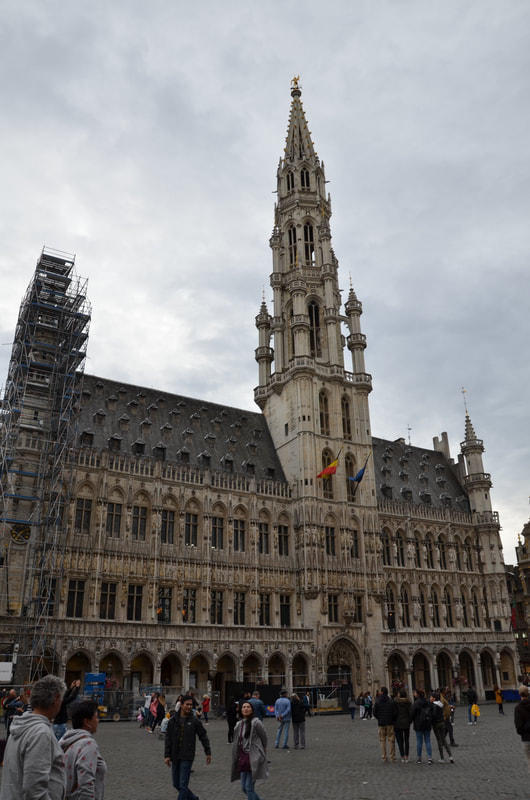 There are many historic buildings on the market square, each of which has a story to tell. Roi d'Espagne, headquarters of the baker's guild, stands at number one. Its name comes from the Spanish emperor Charles II, whose bust appears on the facade of the building. Belonging to the bakers' guild is confirmed by the allegory of Strength, Fire, Water, Wind, Grain and Prudence placed on the balustrade. The old guild sentence says that to get the perfect loaf of bread, it is necessary for these six factors to work together. The building was built in 1697 year. Above his entrance is the figure of Saint. Aubert, patron of bakers. The building is topped with a dome with a golden statue on top. Today, one of the most popular Le Roy d'Espagne pubs is located here.

Under the numbers 2-3 was the seat of the candle manufacturers' guild. This building is called Maison de la Brouette. Above the door, you can see the golden wheelbarrow, which probably brought paraffin. At the top of the building stands the figure of St. Gilles, patron of the guild. It was installed in 1912 a year. Currently, there is a stylish cafe here.

The houses with numbers 4 and 5 survived the bombardment of 1695, which is why their lower facades remained unchanged. Building number four is called Maison du Sac and is richly decorated with magnificent ornaments. From 1444 years it housed the headquarters of carpenter and coopers' guilds. Interesting are the characteristic supports (pilasters and caryatids), which take the shape of finishing wooden furniture. The upper part of the building was rebuilt under the supervision of Antono Pastorana in the Baroque style. Building number five is Maison de la Louve, former headquarters of the archers' guild. It was built in 1690 year according to the design of Pieter Herbosch. This is a great example of combining elements of Roman and Flemish architecture. The name of the building comes from a bas-relief above the entrance depicting the legendary she-wolf feeding Romulus and Remus. At the level of the second floor, between the windows, there are allegorical statues of Truth, Lie, Peace and Discord. On the pediment there is a bas-relief of Apollo shooting a python. The building is crowned with the image of the Phoenix, a symbol of immortality. 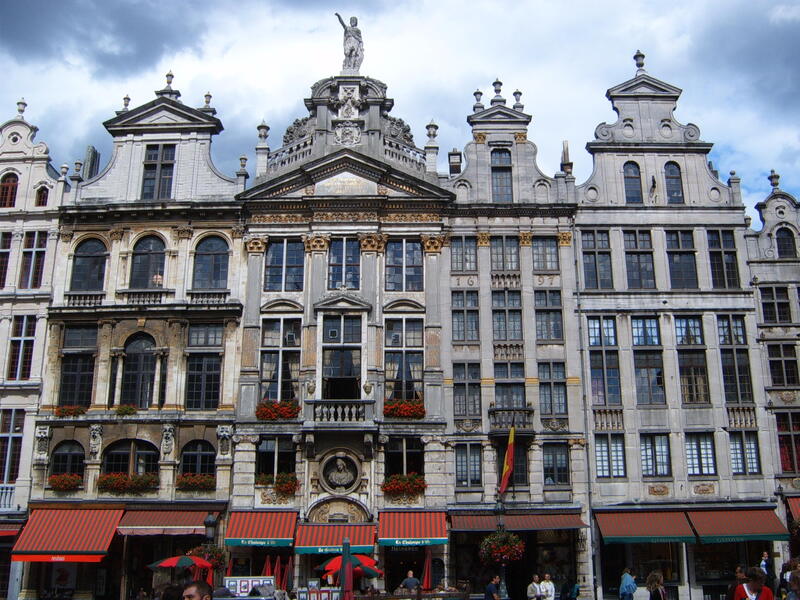 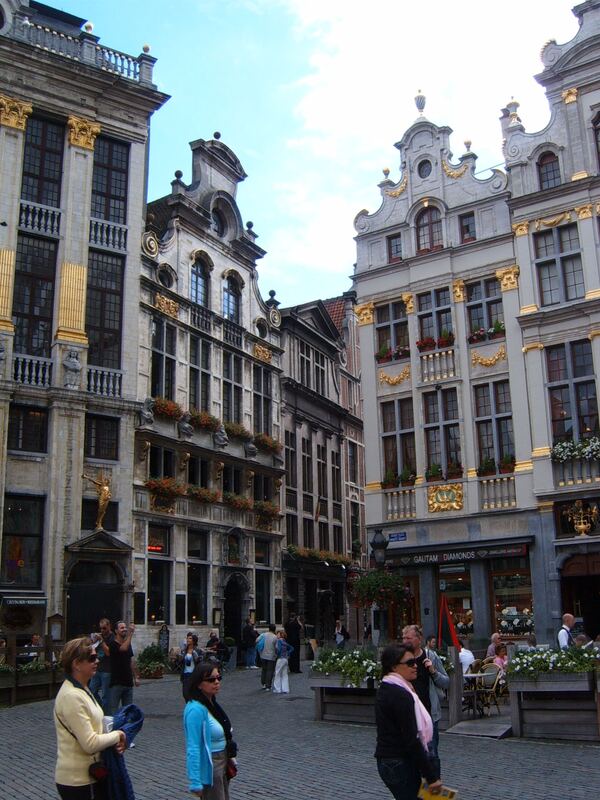 Maison du Cornet is building number six. From 1434, it was the home of the rafters' guild. His current appearance was designed by Antoon Pastoran in 1697 a year. Its pediment resembles a stern of a ship. The medallion shows the image of the Spanish monarch, Charles V, and next to the wind rose, a symbol of sailors.

The house at number seven is Maison du Renard. Former headquarters of the guild of haberdashery manufacturers. The current appearance of the facade is the work of Cornelle van Nerven and was created in 1699 year. It is a great example of Flemish Baroque, with visible influence of Louis XIV. The name of the building comes from the golden fox statue above the entrance. Above there are rich bas-reliefs of cherubs, which are accompanied by haberdashery. At the height of the second floor there is an allegory of Justice in the company of four statues symbolizing the continents. At the top of the building there is a figure of St. Nicholas, patron of the guild. 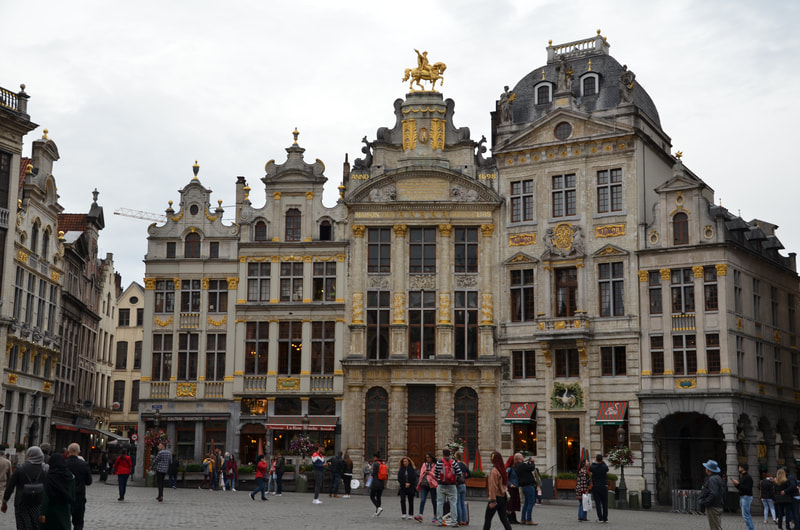 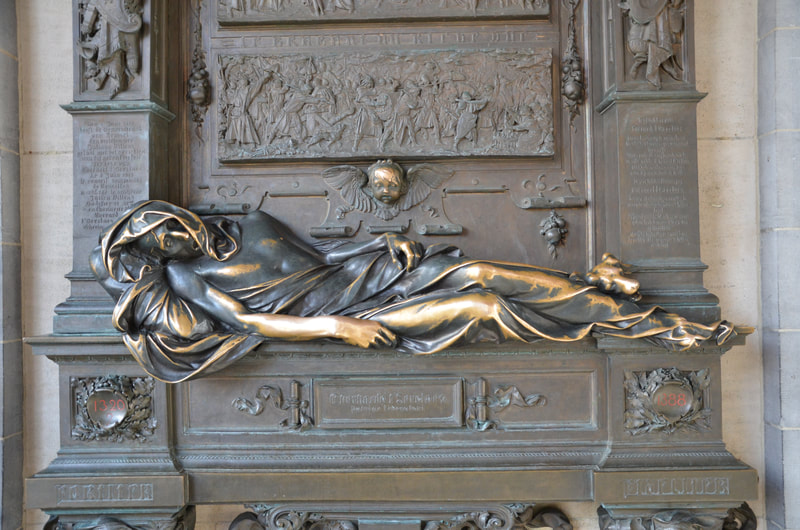 Number eight bears the smallest house on the market, Maison de l'Etoile. The first mention of the building dates back to the 13th century. Then he served as the seat of the royal representative, and then the magistrate. Under the arcades of the building there is a statue of the dying Brussels counsel Everaerd t'Serclaes, who was attacked by wet men Mr. Gaasbeek, died here 31 March 1388 year. According to an old legend, touching the right arm of the hero guarantees happiness and love the following year. Next to it, under the arcades, is a commemorative plaque dedicated to the Mayor of Brussels, Charles Buls, to whom the city owes its present shape to the building.

Maison du Cygnes, or House under the Swan, is the number 9. This building was built in the 15th century. It took its name from a mighty swan statue placed above the entrance with outstretched wings. Initially there was a cabaret here. During the siege and shelling in 1695, the building was destroyed. It was rebuilt in the style of Flemish Baroque. In the year 1720, the guild of artisans bought the building, creating its headquarters here. Marx and Engels on the ground floor of the building wrote their famous work Manifesto. In 1885, the Belgian Labor Party was founded. Today, it houses an exclusive restaurant.
Maison de l'Arbre d'Or was built in the 15th century as a wooden building. One hundred years later, it was bought by the brewers' guild, which still owns it. In the 17th century, according to the design of Willem de Bruyn, the present shape of the building was created. Above the pediment of the house is a golden silhouette with a spear. It is a statue of Charles of Lorraine, which replaced the previous figure of the Habsburg city governor. The basement of the building houses the Brewing Museum (Musée des Brasseurs Belges). 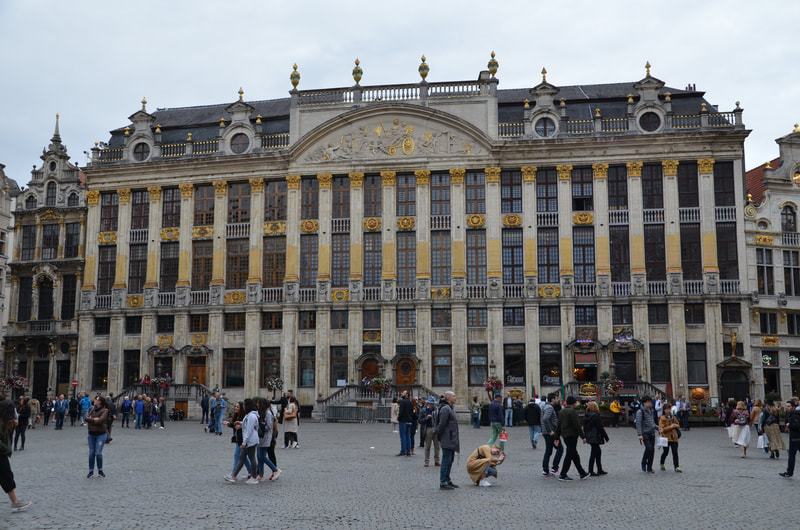 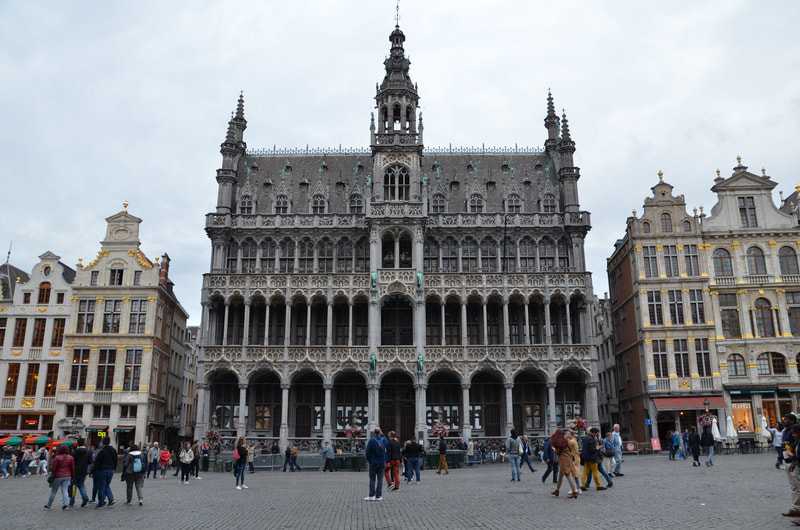 From the east, there is a building with a uniform wall facade, creating the impression that it is one tenement house. In the Middle Ages it existed as a castle of the Meynaert family. One common facade for guild houses number 13-19 was created after the destruction of 1695 a year. The building is called Maison des Ducs de Brabant. On the narrow pilasters there are busts of 19 princes of Brabant. The building number 15 housed the gravediggers' guild, and the number 16, chamber of the millers, where Victor Hugo lived for some time. The building number 17 houses the guild of trolley manufacturers.

Maison de Tailleurs at numbers 24-25 is a building from 1697, designed in the style of Italian Baroque by the architect W. de Bruyn. Above the entrance to the building there is a bust of St. Barbara, at the very top of the facade is a stone statue of St. Bishop Boniface, patron of the guild.

Numbers 26-27 is Maison de Pigeon, from 1553 years the seat of the painters' guild. The ground floor of the building was made in the Gothic style, and from the first floor you can see Renaissance elements. Victor Hugo took refuge here when he had to flee France from Napoleon III. He created the short story Little Napoleon here. At number 28, a private tenement house was created, designed by Jackob Walkiers, which has survived in its original shape to this day.
Opposite the town hall stands the mighty Maison du Roi (flam. Broodhuis). This house was founded in 1406 as the seat of the bakers' guild. Then the building was adapted by the Burgundian counts as a tax collector. In 1515 A. Keldermans and Hendrik van Pede built a magnificent building in the late Gothic style for the king. In 1695, the building was severely damaged. It was not rebuilt until 1896 in the neo-Gothic style, according to the design of Wiktor Jamaer. In the nineteenth century, the city museum was created in the building (Musee de la Ville Bruxells). The history of the city is presented here on three levels. Wonderful sculptures, tapestries, engravings, paintings and furniture are exhibited. There is also the original Manneken Pis and a collection of about 880 costumes in which he is wearing. The museum also presents a painting by Pieter Breughl the elder, Country Wedding.
src = "/ files / theme / custom.js">
EnglishFrançaisNederlandsDeutschEspañoljęzyk polski