Temple of is the mother church for all churches in the diocese. It is served by a chapter, a college of twelve priests, who provide daily Eucharist and prayer for the diocese.
Sancta Legia Ecclesiae Romanare Filla
The church Paweł was raised to the rank of cathedral before 1812 a year. It became the main temple of Liege in place of the cathedral of St. destroyed during the French Revolution. Lambert. On the lintel of the entrance portal there is an inscription: Sancta Legia Ecclesiae Romanare Filla (Saint Liege, daughter of the Roman church).

The nave has seven bays and extends up to the bottom of the tower. It is based on cylindrical columns topped with a leaf-shaped ornament. In the fourteenth century, the century-old ceiling in the nave was replaced with gothic cross vaults, with a rib structure that allowed the insertion of a clerestorium (a wall with windows above the roof of the nave, mainly in Romanesque or Gothic churches), which was placed on top of the triforium (in Romanesque and Gothic sacred architecture) gallery located inside the church, in the thickness of the wall). The nave and transept vault were painted in the years 1528, 1529 and 1557. They are very well preserved. Painting the rest of the vault is from the 19th century. 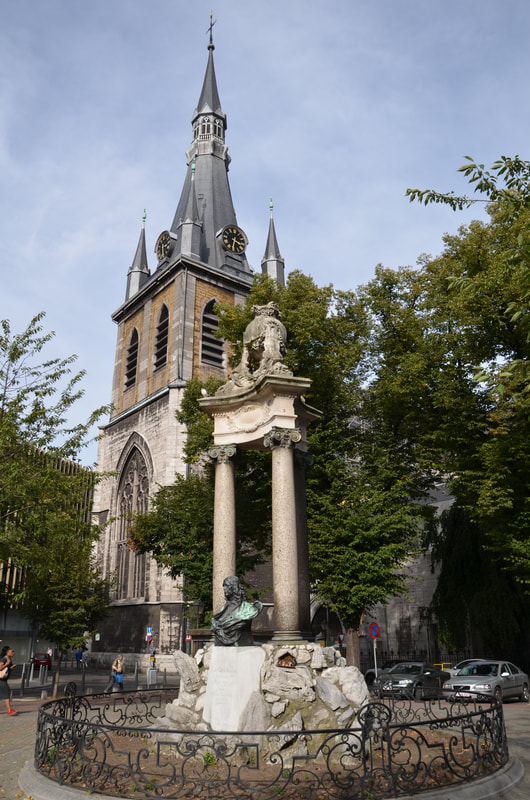 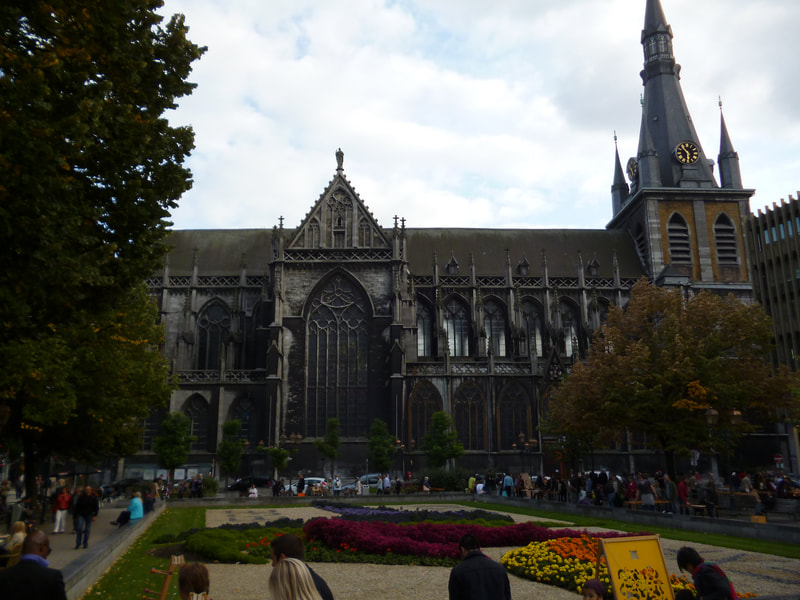 Inside the church, the reliquary of St. Lambert. A massive work was done at the beginning of the 16th century by the goldsmith from Aachen. Inside, the artist placed the skull of the saint. The church treasury contains 11th-century, wonderful artistic products. An exceptionally beautiful wrought iron door with leaf-shaped ornaments leads to the vault. They come from the ancient cathedral of St. Lambert's and were made in the thirteenth century. An important work in the treasury is also the reliquary of St. George. The Prince of Burgundy kneels on a pillow, holding in his hands a small hexagonal reliquary containing the finger of St. Lambert. Behind the prince stands St. Jerzy, patron of knights.
﻿ The magnificent Byzantine image of the Mother of God and Baby Jesus is probably a work from the 11th century.   The image was made in the filigree technique (goldsmith's technique of decorating or making an entire object from thin wires arranged in an openwork mesh). The main altar in the cathedral comes from the 19th century (1881-1894). It was made of brass and the sculptures that were part of it were made of marble. Columns from porphyry (igneous volcanic rocks). This altar was created by Leodian JJ Dehin. At the bottom of the altar there is a beautiful mosaic created by Luca Caramini. On the side, a gilded eagle-shaped rostrum. 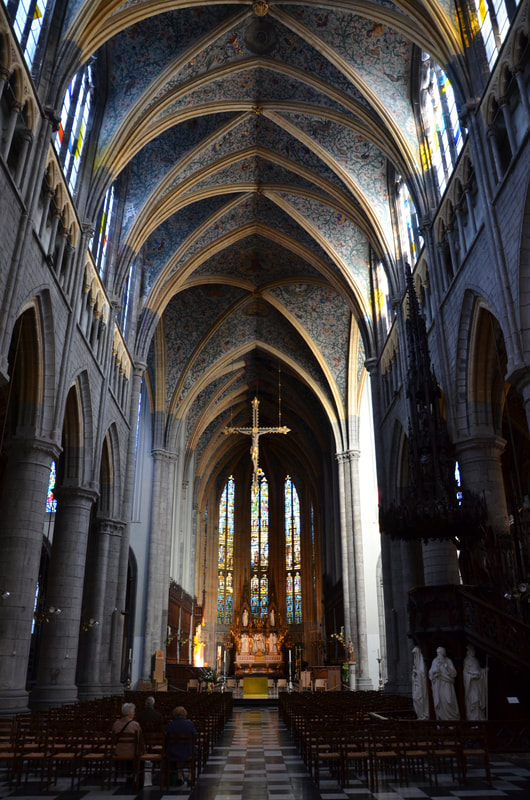 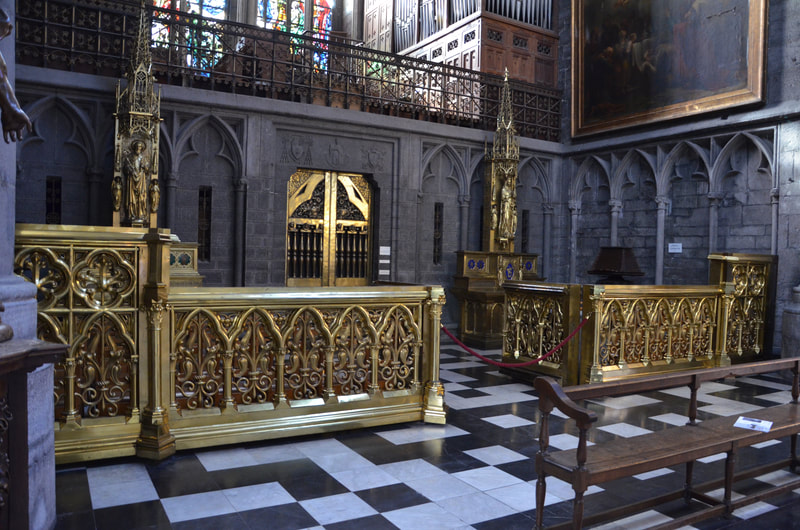 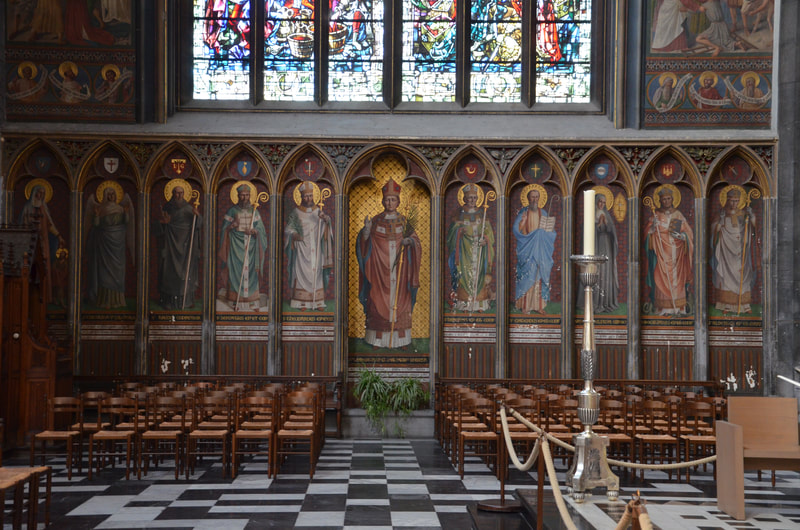 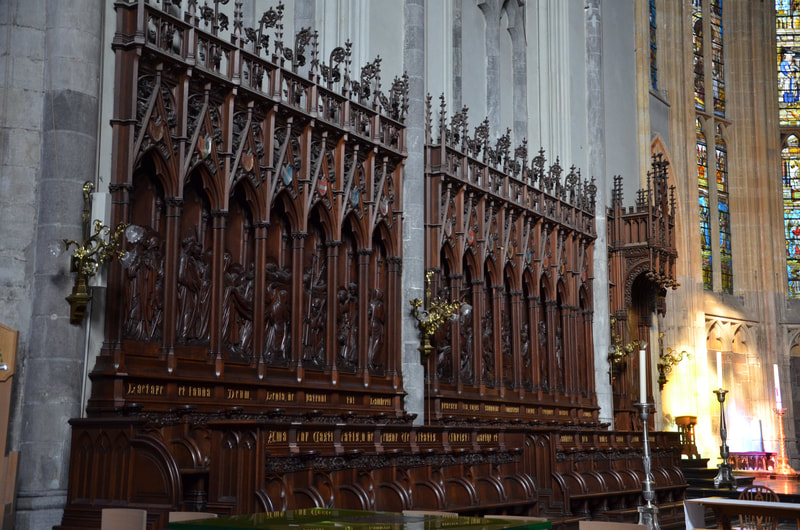 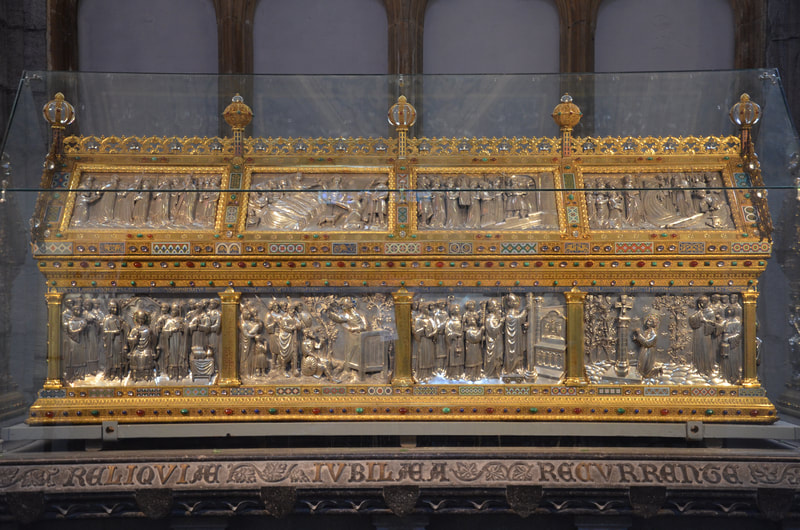 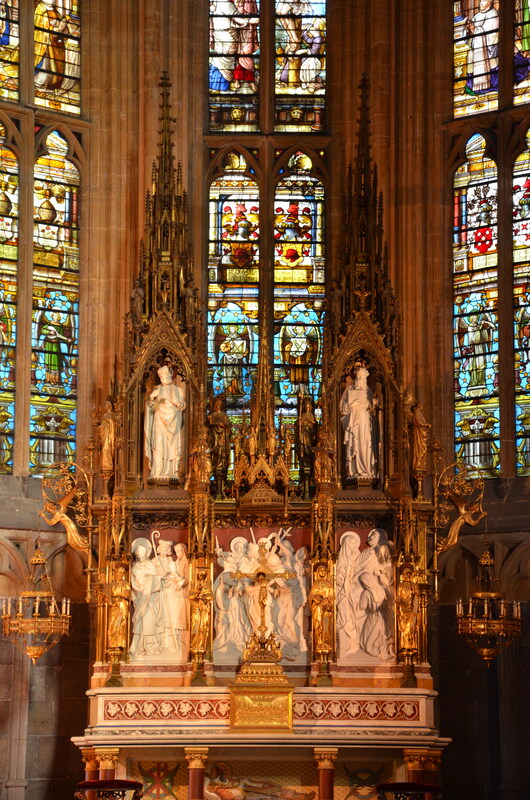 The carillon comes from the old cathedral of St. Lambert. It is located on the top of an octagonal tower, the spitz of which was built on the initiative of Napoleon, in the early nineteenth century, from materials from the old cathedral. 340 steps lead to the top of the tower.
In the chapel, on the left of the main altar, there is a beautiful bronze sculpture Christ on the cross . This is the work of Jean Del Cour (1631-1707). The same artist also created a wooden sculpture in the year 1686 angels worshipers .

In the north transept you can admire a beautiful stained glass window Last supper and Corpus Christi procession (in the shape of a double crown), and in the form of the Eucharist (the miracle in Cana and the sacrifice of Melchizedek). Its author is Max Ingrand.
In the apse of the northern nave, on the floor there are graves of the bishops of Liege: Albert de Cuyck (1200), Erard de la Marc (1538), Constantin van Hoesbroeck (1792), Corneille van Bommel (1851) and Guillaume - Marie van Zuylen (2004).
Murals from the southern and northern transept in the style of Quattrocento (Adolphe Fassin, late 19th century) depict the life of the Virgin and Saint. Paul. Those in the neo-Gothic style are portraits of bishops and diocesan saints (early 20th century). Suspended under a triumphal arch, the great Christ of polychrome wood dates from around 1330 years. Initially, it hung on an old crucifix. She returned to the beautiful cross in 1884 a year. 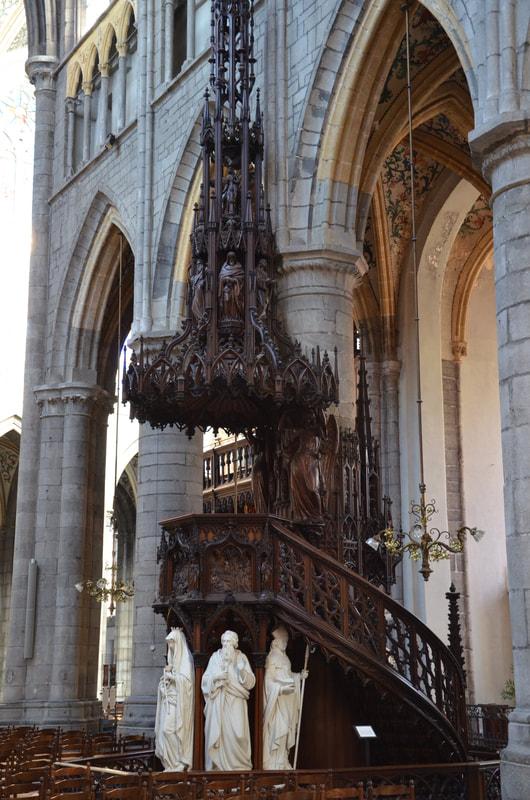 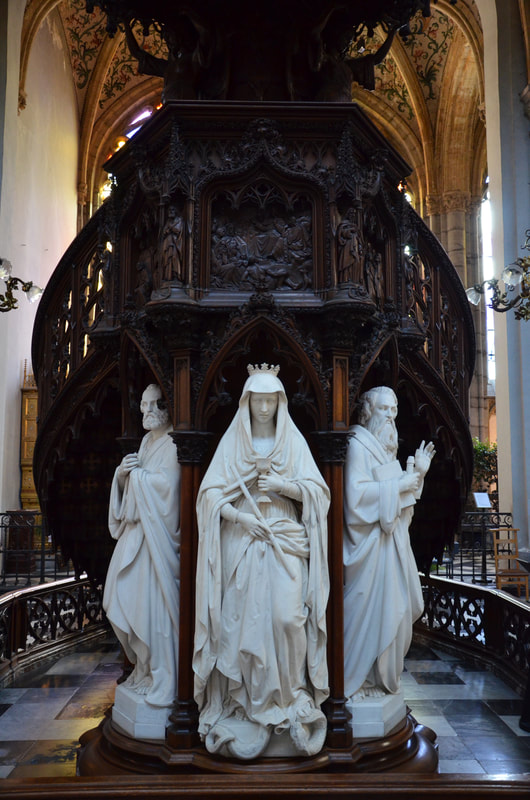 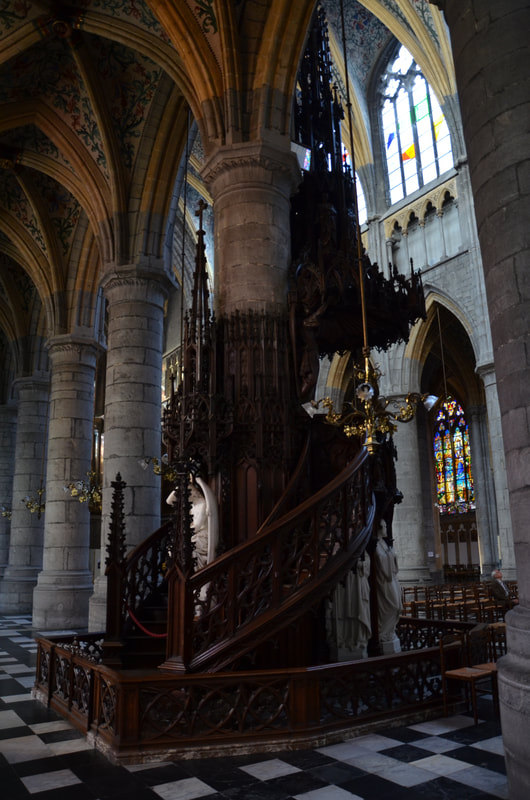 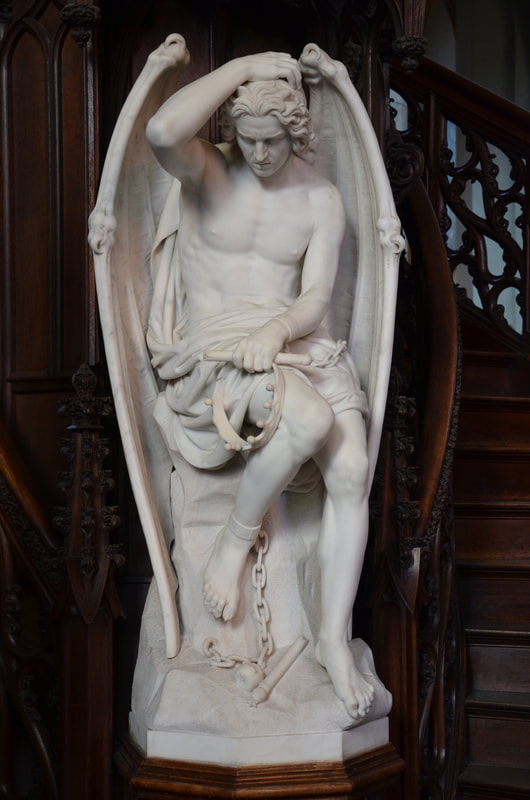 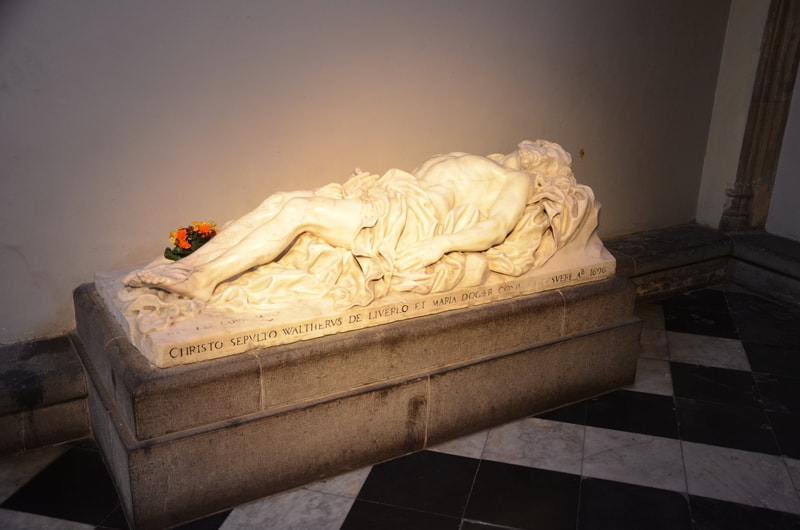 The beautiful stained glass window by Leon Oultres (1530) was created during the time of Bishop Liege Erard de la Marck. It presents the coronation of the Blessed Virgin Mary (in the middle of a large crown), in the lower register the conversion of St. Paul, and the worship of St. Lambert by the founder, canon Leon Oultres. Stained glass window saved from damage in 1794 a year. It was restored in the year 1914. However, in the year 2014 it was mounted in the cathedral of St. Paul in Liege. This is one of the finest stained glass in Belgium.

The magnificent pulpit, made of wood, decorated with statues of Piotar and Paweł, Saint. Lambert and St. Hubert is the work of Guillaume Geefs (1848). On the back, at the fork of the stairs, a beautiful sculpture of the imprisoned Lucifer.
In the chapel of St. Lambert's is a beautiful reliquary with the relics of this saint. Made on the model of medieval relics by the Wilmotte brothers in 1896 years. In this chapel, the magnificent statue of St. Lambert's Del Cour style, and gilded altar. 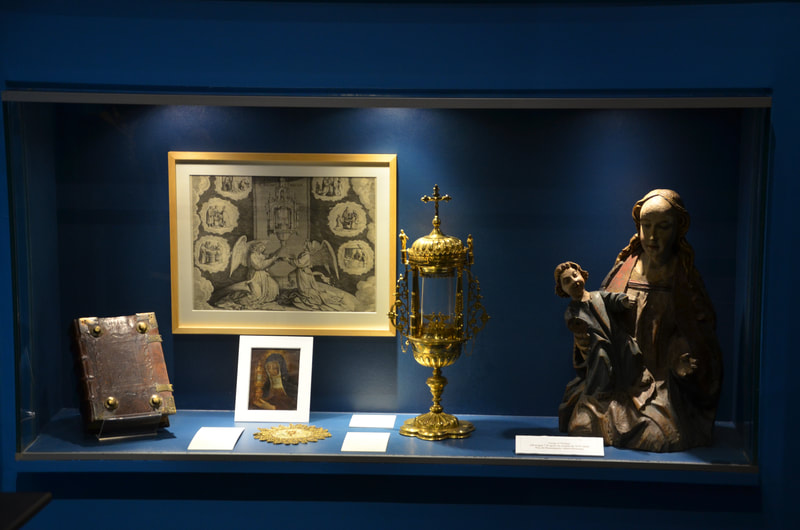 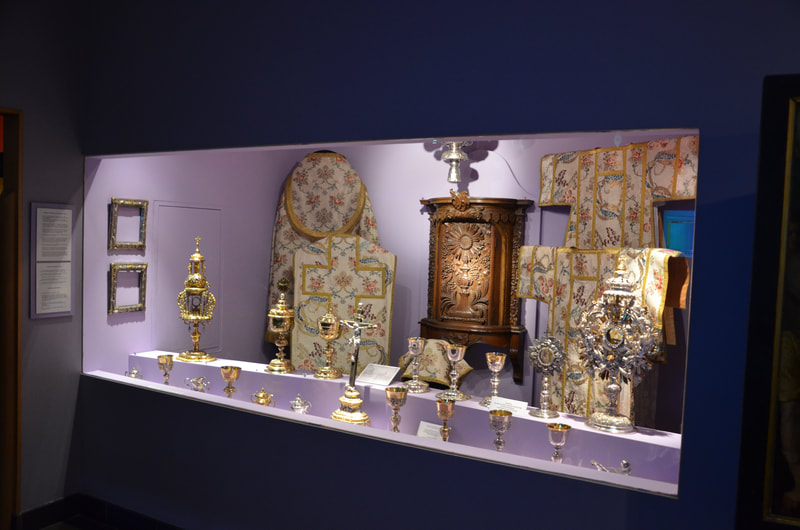 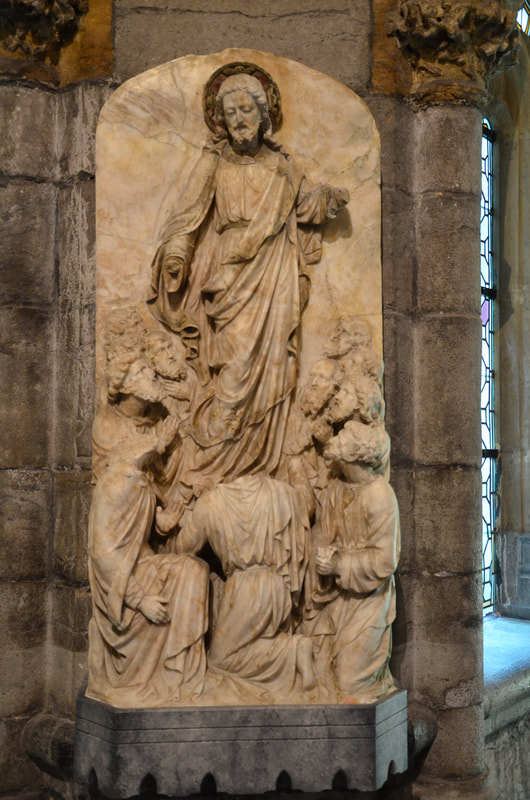 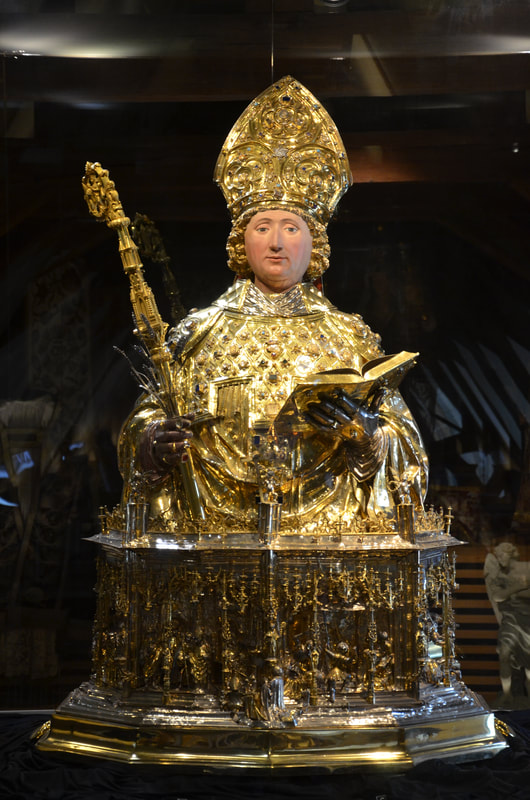 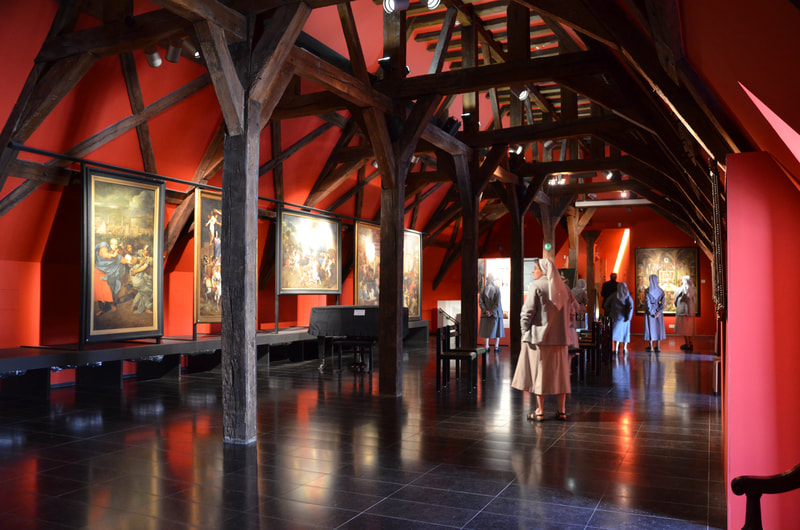 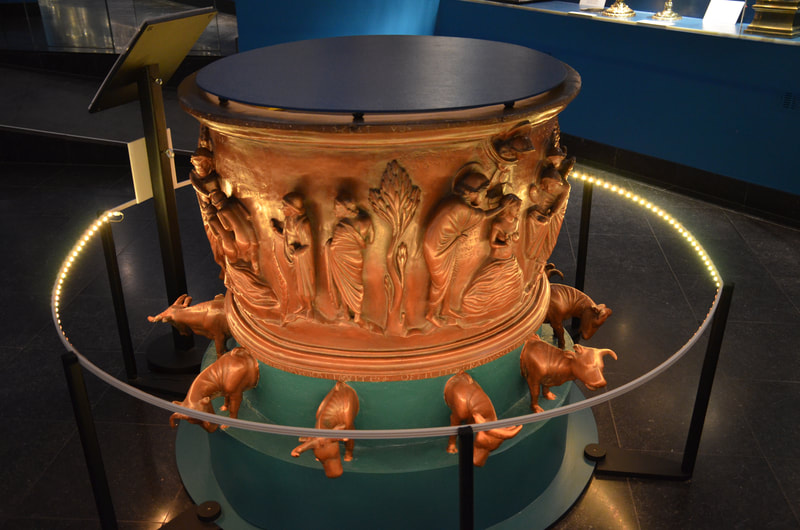 The Chapel of the Virgin Mary, in the northern nave, hides a beautiful statue of Mary from white marble. This is the work of monk Robert Henrard (1617-1676). On both sides of the sculpture there are beautiful reliefs (inspired by the relief on the facade of the church of St. Peter in the Vatican. Lying Christ (sculpture on the grave of Walther de Liverloo and his wife) is a masterpiece created by Jan Del Court (1696) who traveled to Rome to admire Michelangelo's master Pieta. After returning, he created this wonderful work, the body of Christ ready for resurrection.
The beautiful 1970 stained glass window depicting the birth, resurrection and sending of the holy spirit is the work of Max Ingrand. Two paintings adorning the side walls depict the resurrection and the Assumption of the Virgin Mary.

The monastery adjacent to the church is a place not to be missed. Here you will find stone tombstones of former canons, epitaphs of bishops: Georges-Louis Berghes and Francois-Charles de Velbruck. In the monastery garden we will find an extraordinary space of silence and prayer in the city center. The southern wing gives access to the new treasury, which houses wonderful relics, and unusual collections of decorations and fabrics.
Belgium
EnglishFrançaisNederlandsDeutschEspañoljęzyk polski